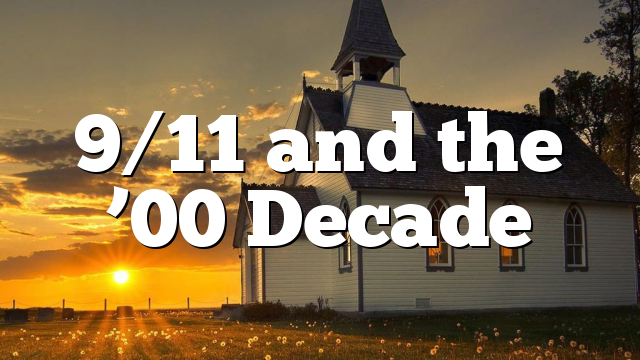 Where Is God Going – Seven Spiritual Trends of the ’00 Decade

by J. Lee Grady (as posted on Facebook by Ray E Horton)

[This message was posted by Grady almost a decade ago, reporting on the then previous decade. He is writing about a season of hope. Nothing much has changed, accept that things seem to be accelerating as we start out the 2020s with coronavirus, economic collapse, riots in the streets, yet a resilient and fast-growing Body of Christ. Mainstream churches may be on the decline, but Pentecostal, Charismatic and many other Evangelical churches are growing leaps and bounds. Subheads and emphasis mine – Ray E. Horton]

The last ten years weren’t just about terrorism and recession. Amid the storm clouds, God was working in profound ways.

We didn’t know what to call it—was it the ‘00s—yet we’ve just passed through quite a decade. We had natural disasters, the 2004 Asian tsunami, Hurricane Katrina in 2005, financial meltdowns, bank failures, and 10 percent unemployment, and global conflict, 9/11 and the war on terror. It brought doom and gloom on one hand and technological breakthroughs on the other. What a ride it has been.

What a Ride It Has Been

How has God been working during this tumultuous season? Here’s my list of seven megatrends that marked these last 10 years:

1. Third-World Christianity kept growing. There are now about 600 million Christians in Africa. Protestant Christianity grew 600 percent in Vietnam in the last decade. In China, where a 50,000-member megachurch was raided in Shanxi province a few weeks ago, there are now an estimated 130 million churchgoers.

We have no reason to fear the future. Whatever challenges loom ahead, the same God who carried us through this past decade will give us success in the next one

Astounding church growth has occurred in Guatemala, Brazil, India and Ethiopia. In Nepal, which had no Christians in 1960, there are now a half-million believers. The Christian population of Indonesia has mushroomed from 1.3 million to 11 million in 40 years.

Smug scholars in Europe and the United States love to cite Islam as the world’s fastest-growing religion, but observers know the facts: Christianity, while waning especially in Europe, is growing faster than ever in the Southern hemisphere. Philip Jenkins, who wrote “The Next Christendom” in 2002, declared: “The center of gravity has moved to the global South.” So, if were looking for the religion that is going to affect the largest number of lives in the 21st century, it is almost certainly going to be Christianity.

2. The digital revolution opened new doors for evangelism. This decade began with fears that a Y2K virus would shut down all computers. The opposite happened. Technology exploded. Google became a verb, more than 200 million people joined Facebook, and analog TV faded into history along with phone books, answering machines, road maps, cassette tapes, floppy disks and rolodexes—unless you purchased those items on eBay for sentimental reasons.

Traditionalists complained about all the new terms technology added to our lexicon: TiVo, Twitter, Skype, iPod, iTunes, YouTube, Hulu, Kindle, webcams. But the shift to digital media happened faster than the speed of a wireless signal. It will forever change the way we live, work and play. Rather than fighting change, we’d best find God in the swift current and discover how He wants us to use new media. The possibility of reaching every person on this planet with the gospel has never been this huge.

3. The global economic crisis didn’t stop the church. It seemed as if God pushed a great big reset button in 2007. The mortgage bubble burst, banks were in trouble and credit dried up. When U.S. gas prices hit $4 a gallon in 2008, people feared that the American Dream had died.

Yet, amazingly, while hundreds of thousands of people lost jobs and the government was bailing out GM and Chrysler, charitable giving to churches actually went up 5.5 percent in 2008, even though other forms of giving declined. Faith actually thrives in a recession.

4. As militant Islam increased, so did a backlash. On 9/11, terrorists hijacked our planes and crashed them into the World Trade Center, the Pentagon and Pennsylvania farmland. But in some parts of the world where radical Islam is predominant, protest movements flourished. This was never more evident than in 2009 when Iranian youth activists took to the streets to denounce their own tyrannical government. In other parts of the Middle East, Muslims are finding Jesus Christ after having supernatural dreams about Him. Terrorists did not stop democracy—or the outpouring of the Holy Spirit.

5. Spiritual hunger grew more intense. Although secular culture seemed to grow more hostile to Christian faith and values during the ‘00 decade, movies, books and music reflected a growing interest in spirituality—everything from atheism to pantheism to vampires to The DaVinci Code—and Christian ideas competed for the global stage.

6. The charismatic movement experienced a painful but needed purging. Although global Pentecostalism continued to grow, parts of the independent charismatic movement went into a tailspin. Marred by high-profile divorces, sex scandals and a credibility crisis, segments of the charismatic church fell on hard times. The overhaul of Oral Roberts University in 2008 seemed to be a prophetic harbinger of a movement-wide housecleaning.

At the close of the decade, charismatic churches were energized when thousands of youth gathered for protracted prayer meetings at Mike Bickles International House of Prayer in Kansas City, Mo. Those youth were not focused on the carnal prosperity message but on personal holiness, Spirit-empowered evangelism and prophetic social justice—values that are now emerging as key components of a new charismatic agenda.

7. A healthy church movement emerged. Refreshing younger voices arose on the charismatic/evangelical scene in the ‘00s—reminding us that when Jezebel threatens, God always reserves His prophets in a cave for a crucial hour. Although this young movement has its stars and its cheerleaders—such as Louie Giglio, Robert Morris, Joel and Jonathan Stockstill, Chris Hodges, Mark Batterson, Samuel Rodriguez, Priscilla Shirer daughter of Bible teacher Tony Evans and Francis Chan—it is driven by thousands of faceless leaders who are contending for a return to passionate faith.

These leaders, from both charismatic and non-charismatic backgrounds, are reclaiming integrity, humility and purity while rejecting the egotism and greedy excess of the past season. They are committed to solid Bible teaching, relational discipleship and a nonreligious church experience that is appealing to the next generation. And they are planting churches—both traditional ones in buildings, as well as house churches—at an aggressive clip.

No Reason to Fear the Future

I’m worn and weary from the stress of the last 10 years, but I have never been more excited about stepping into a new season of opportunity. We have no reason to fear the future. Whatever challenges loom ahead, the same God who carried us through this past decade will give us success in the next one.

[Posted Tuesday, 29 December 2009 by J. Lee Grady Newsletters – “Fire In My Bones.” J. Lee Grady is the former editor and now contributing editor of Charisma. You can find him on Twitter at leegrady.]

Iran announced early Saturday that it had accidentally shot down a Ukrainian passenger jet, blaming it on human error because of what it called…