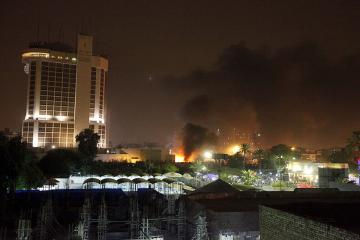 Speech given by Archbishop Justin Welby at the Frauenkirche in Dresden today, during a service to commemorate the 70th anniversary of the allied bombing of the German city.

The service was attended by the President of Germany, Joachim Gauck, and German church leaders.

Full text of the speech follows:

It is a great honour and privilege to be with you on this deeply moving day. This is my first visit to Dresden. Yet so much of your story and the journey that brings us together in this beautiful place is known to me and a cause for both sombre reflection as well as quiet rejoicing.

To be welcomed into your city and invited to share in this event as a British church leader is nothing short of miraculous.

Seventy years ago our nations and peoples were at war. Over three days in February allied bombers brought death and destruction on a scale and with a ferocity it is impossible to imagine. In the rage of war our hearts inevitably harden and increasingly brutal and devastating force is unleashed.

Walking together as friends requires talking together in truth. As Croatian theologian Miroslav Volf challenges us: “To remember wrongdoing untruthfully is to act unjustly.”

Much debate surrounds this most controversial raid of the allied bombing campaign. Whatever the arguments, events here seventy years ago left a deep wound and diminished all our humanity. So as a follower of Jesus I stand here among you with a profound feeling of regret and deep sorrow.

This journey is only possible in the context of God’s love. It is a testimony to God’s mercy that so many across post war Europe were able to take up the almost impossible command of Jesus to love even our enemies.

In so doing we follow him in the way of the cross, so powerfully present here in the Frauenkirche and in the nearby Kreuzkirche through the Coventry Cross of Nails.

Helmut Heinze’s statue, Choir of Survivors, is a deeply moving work, now located within the ruined Coventry Cathedral, a gift from this city of Dresden. Dedicated to civilian victims of aerial bombing, it speaks of the brokenness of our human family.

It has also become a profound symbol of this reconciliation journey. It is when we find it in our hearts to memorialise the suffering of our former enemy that we know reconciliation has come to fruition.

Given the pain of our past it is only the love of God in Jesus that makes that possible. We should never underestimate the miracle which peace in Europe represents – arguably the most significant political process of reconciliation in history.

“From now on there can be no more wars of faith,” writes Dietrich Bonhoeffer. “The only way to overcome our enemy is by loving them.”