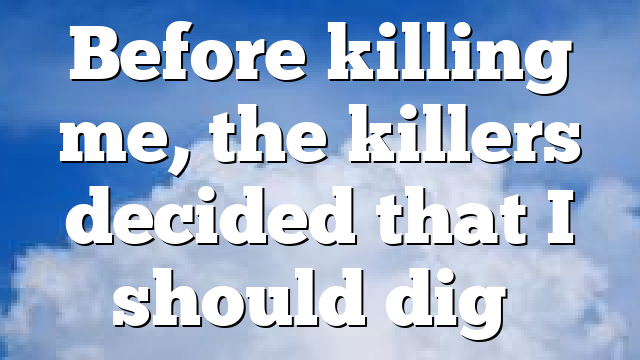 Before killing me, the killers decided that I should dig my own grave. As I was digging, I was also praying. “Lord, I believe you can deliver me. You can protect me from being killed by these people. I’ve preached about Daniel in the lion’s den, and about how you delivered Shadrach, Meshach, and Abednego from the fiery furnace. Are you still the same God? You can show me now. Please give me that faith.”

I was hoping that God would give me wings to fly away, or that He would send fire from heaven. But God answered in a much different way from what I could have imagined.

As I was digging the grave, one of the killers picked up my Bible and was looking at it. Noticing the many markings in it he asked, “What do all these colors mean?”

“Those are my favorite verses,” I said.

Interested, the man started reading the many highlighted verses. “Are you sure you’ve read all of these?” he asked incredulously.

“Yes,” I responded. I could see that the man had some pity for me.

Turning to his fellow killers he said, “Friends, I know we’re going to kill this man, but please let me help him dig!”

The leader nodded and the man jumped into the hole with me and started digging. “Lord, I prayed, “this grave is going to be finished quickly now. What are You going to do?”

God had a plan, but sometimes we want to try and force God to answer our prayers in the way that we think is best, rather than just trusting Him.

To my surprise, as soon as we were finished digging, the grave digging killer said to his colleagues, “Why should we use the grave for this man we don’t even know? Let him go and dig another grave near the highway. This is our field; why should we bury him here?”

The group agreed, and decided to use the grave for another man they had just killed. Then ironically, one of the killers said, “Before we bury that man, why don’t we pray for him.”

I watched as the group gathered around the body of the person they had just killed before coming after me. “Mary, mother of Jesus, receive him,” they said before rolling the corpse into the grave that had been meant for me.

All of a sudden my entire outlook changed. “Lord!” I gasped, “Don’t allow me to be separated from these people before I tell them who You are! These are people who have never heard about You. They think they can pray for someone they have killed. And we are partly responsible. We never came and taught them the truth about You.”

Right after they buried that man, we moved closer to the highway. I was about to start digging another grave when the man who had my Bible asked if he could keep it. I said, “yes,” but the other killers told him “No! It’s ours—you’ll have to pay for it!”

I could see that the Holy Spirit had already touched this man’s heart, so I begged him, “Please, can I have that Bible and say something before I dig another grave?”

The man was excited and said, “Go ahead!” but another one shouted, “No! He’s our enemy. He has nothing to tell us.”

Then the arguing became very sharp, with some of the group insisting that I should be given the opportunity to speak, while others insisted that I had nothing to say. Just when it appeared that the killers were going to fight each other, one who appeared older than the others asked, “Why are you going to fight over someone you don’t even know? Those who want to listen, sit and listen; others, sit and shut your ears. When he’s done, we’ll kill him.”

So they all sat down and I started to preach.

First, I thanked them. “Thank you for praying for somebody that you have killed. However, you need to understand what the Bible says about death—the only chance you have to be saved is during your lifetime—not after you are dead. ‘For the living know that they will die,’ I quoted from Eccl. 9:5, ‘but the dead know nothing.’ I’m not going to plead for you to let me go, I continued, because I know that even if you kill me a time is coming when I will be resurrected.

“Among the people you are killing are another tribe—they are not Hutu or Tutsis. They are God’s children. You think that you’re fighting a tribal war, but you’re mistaken. This is a war between Christ and Satan. You think that the people you’re killing are Tutsis, but they belong to a totally different tribe because they have given their hearts to Jesus and they are His children.”

Then I read 1 Peter 2:9-10 to them: “But you are a chosen generation, a royal priesthood, a holy nation, His own special people, that you may proclaim the praises of Him who called you out of darkness into His marvelous light; who once were not a people but are now the people of God, who had not obtained mercy but now have obtained mercy.”

As I preached, I could see some of the killers were crying, and I knew that the Holy Spirit was working on their hearts. After preaching for 15 to 20 minutes I told the group, “Now I’m going to say a final prayer, and after that I will dig another grave.”

As soon as I finished praying, someone shouted, “If anyone kills this person, his blood be upon them!”

Then the leader spoke up. “I was the one who suggested that we kill this man in a very bad way. But now, we’re not going to kill him.”

I knew it was only by God’s grace that my life was spared. Who am I? I didn’t have any power. God was just kind.

During the approximately 100-day genocide from April 7 to mid-July, 1994, approximately 1 million people were killed, including my entire family. But even though I came face to face with death numerous times, the Lord always saw fit to spare my life.

John Kissinger [10/26/2015 6:47 PM] The FDA has linked five recent deaths to the highly-caffeinated Monster Energy drinks. The drinks have about seven times……