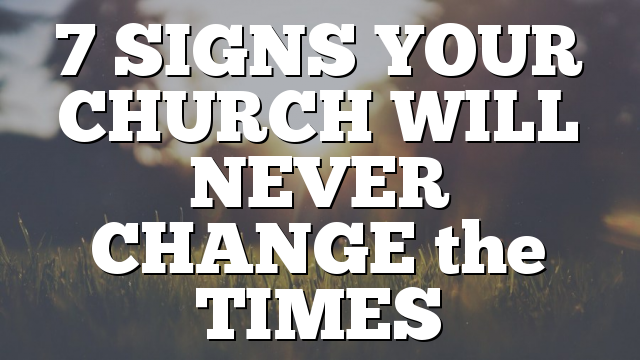 There’s a very good chance you’re trying to change something in your church or organization.

There’s even a decent chance some of you are trying to change everything. I’ve been there.

But they always change the methods to make sure the mission stays alive and the message gets heard.

And that means change.

Change is at the heart of leadership because a leader’s job is to take people from where they are to where they need to be. You can’t do that without ushering in change.

And yet, trying to engineer change can be one of the most difficult things you’ll ever do as a leader.

How do you know when your church is simply so resistant to change that it isn’t going to budge? How do you know the problem is so deep that radical intervention is required?

Here are 7 signs your church is never going to change.

1. YOU KEEP HAVING THE SAME CONVERSATION OVER AND OVER (AND OVER) AGAIN

Ever have that feeling like no meeting is ever a new meeting—that you’re talking about the same issues month after month, year after year?

Far too many church leaders have that feeling, actually.

Without getting into specifics, I worked a report on church growth 15 years ago for a church group experiencing decline. Last year, I saw the same group of people table an almost identical report addressing the exact same issue. By all accounts, they had made no progress on the issue despite studying it for a decade and a half.

The only thing that changed, of course, is that now the problem is far worse than it was before. The attendance decline they were experiencing has morphed into a free fall.

In my book, Lasting Impact: 7 Powerful Conversations That Will Help Your Church Grow, I devote an entire chapter to how to lead your board through a productive conversation that leads to actual change. (You can download a sample chapter for free here.)

The only thing that changes when YOU won’t change is that the problem gets worse.CLICK TO TWEET

2. EVERY TIME SOMEONE RAISES A NEW IDEA, SOMEONE LISTS 3 REASONS IT WON’T WORK

Of course the reason you have the same conversation, again and again, is because every time you raise a new approach, someone lists three reasons it won’t work.

You know what won’t work for you long term?

Coming up with reasons why it won’t work.

There are a thousand reasons innovations won’t work. Until they work.

In 1876, cash-strapped Alexander Bell offered to sell his new invention, the telephone, to Western Union for $100,000.

They rejected it. This, by all accounts, was their report:

We do not see that this device will be ever capable of sending recognizable speech over a distance of several miles. Hubbard and Bell want to install one of their telephone devices in every city. The idea is idiotic on the face of it. Furthermore, why would any person want to use this ungainly and impractical device when he can send a messenger to the telegraph office and have a clear written message sent to any large city in the United States?…Ignoring the obvious limitations of his device, which is hardly more than a toy. This device is inherently of no use to us. We do not recommend its purchase.

Take that to your next board meeting.

There are a thousand reasons innovations won’t work, until they work.CLICK TO TWEET

3. FONDNESS FOR THE PAST EXCEEDS PASSION FOR THE FUTURE

A sure sign that people will never change is a deep love for the past that eclipses any enthusiasm for the future.

It’s simple: monitor your language. When most of your stories (and even your verb tenses) are in the past tense, it’s a sign you’re looking backward, not forward.

If all of your cultural references (songs, movies, shows) are rooted decades in the past, it’s a sign you’ve lost touch with the present and the future.

When your fondness for what you used to do is greater than your passion for what you’re going to do, you’re in trouble.

Bottom line? When all of your excitement is about the past, you haven’t got much of a future.

When all of your excitement is about the past, you haven’t got much of a future.CLICK TO TWEET

As a leader, you’d love to solve some big issues.

But the challenge when you lead a group that won’t change is that you never reach any big things because the small things always become big things.

You know what I’m talking about.

The debate on whether you should have carpet or hardwood lasted six months. And then they decided on carpet. Which itself then became the two-month discussion on what colour the carpet should be. Which then became the four-month debate on who should install it.

You know what you should do when you face a leadership stalemate like that?

Break in one night and install it yourself.

I’m kind of only half kidding.

Or call an audible and say something as direct as “Hey, we’ve been talking about this for FOUR months. We have to stop and move on to make progress. Why are we stuck like this?”

5. PEOPLE ARE STILL COMPLAINING ABOUT THE LAST THING YOU CHANGED

You know you’re leading people who don’t want to change when they’re still complaining about the last thing you changed.

And that was five years ago.

I don’t know what else to say about this except…that was FIVE YEARS ago.

6. “WE’VE NEVER DONE IT THAT WAY BEFORE” HAS BECOME A THEME SONG

It’s easy to get smug and think “only super traditional churches fall into traps like this.”

Successful, growing churches struggle with this tension too.

Why? Because effectiveness, once experienced, is something most leaders don’t want to jeopardize.

As leaders, you become so afraid of breaking what’s working that you resist change.

Even success creates barriers to innovation. The greatest enemy of your future success is your current success.

The greatest enemy of your future success is your current success.CLICK TO TWEET

7. YOUR LEADERS DON’T BRING UNCHURCHED FRIENDS WITH THEM

A sure sign that people have given up on change is that no one in leadership is actually investing in people who don’t currently attend church.

When you’re not praying for, investing in or hanging out with unchurched people, your leadership conversations become about personal preferences, not biblical principles.

And when your church becomes all about your personal preferences you lose the mission.

When your church becomes about your personal preferences, you’ve lost the mission.CLICK TO TWEET

If this is you, what do you do?

First, as a leader, call the situation for what it is.

Or maybe, out of frustration, you’ve just decided your church will never change. In which case, if you believe that as a leader, it won’t.

So confess that, and own it.

Have an honest conversation. Perhaps it will lead to a place where your leaders look in the mirror and say “Houston, we have a problem. And it’s us.”

That would be a breakthrough moment.

And finally, just realize that—contrary to the title of this post—change IS possible because not everyone is actually opposed to change. We just feel like change is impossible and everyone is opposed.

As I talk about in my course, The Church Growth Masterclass, rarely are more than 10% of people opposed to change at any given moment.  It’s just that the opponents are loud, and we often confuse loud with large.

If you doubt that everyone is deeply opposed to change, write down the names of the vocal opponents on a sheet of paper. Chances are you will have trouble identifying more than 10-20% of your congregation by name.

Don’t let the 10% of people who are opposed to change determine the future of the 90% who aren’t.

CONFESSIONS OF A STREET PREACHER: I just saw a miracle