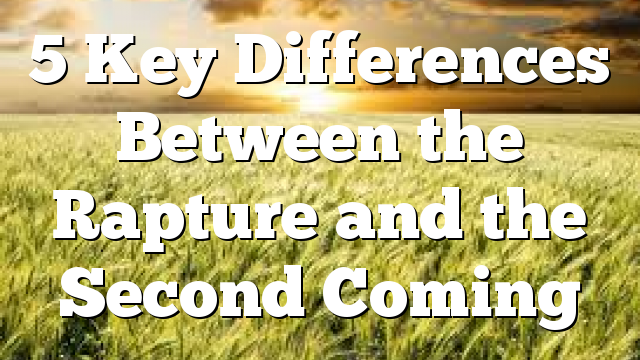 Comparing the Rapture and the Second Coming of Christ

In the study of Eschatology, these two events are often confused because they are similar. Both happen during end times and both describe a return of Christ. Yet there are important differences to discern. The following is a comparison of the Rapture and the Second Coming of Christ, highlighting the key distinctions noted in Scripture.

1) Meeting in the Air – Versus – Returning with Him

In the Rapture, believers meet the Lord in the air:

In the Second Coming, believers return with the Lord:

The Tribulation is a future seven-year period when God will complete his discipline of Israel and final judgment upon the unbelieving citizens of the world. The Rapture will happen before the Tribulation:

While the Second Coming will happen at the end of the Tribulation:

In the Rapture believers are taken from the earth by God as an act of deliverance:

In the Second Coming unbelievers are removed from the earth by God as an act of judgment:

The Rapture, according to Scripture, will be an instantaneous, hidden event:

The Second Coming, according to Scripture, will be seen by everyone:

5) At Any Moment – Versus – Only After Certain Events

The Rapture could happen at any moment:

As is common in Christian theology, there are conflicting views regarding the Rapture and the Second Coming. One source of confusion over these two end times events stems from verses found in Matthew chapter 24. While speaking broadly about the end of the age, it’s likely this chapter references both the Rapture and the Second Coming. It’s important to note, the purpose of Christ’s teaching here was to prepare believers for the end. He wanted his followers to be watchful, living each day as though his return was imminent. The message was simply, “Be Ready.”

Church of England to denounce therapy for unwanted same-sex attraction

The Church of England plans to debate whether to denounce therapy for unwanted same-sex attraction, at the upcoming General Synod in July. The Church…