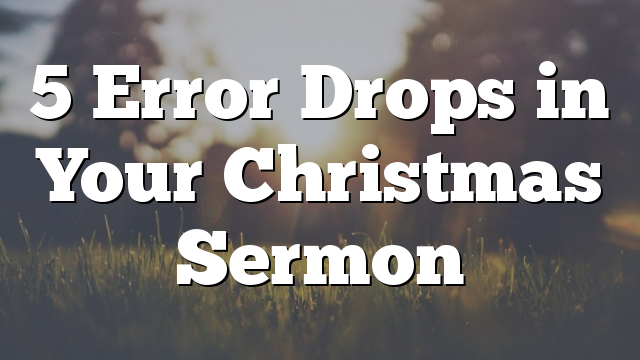 1. Don’t add details that aren’t in the text. For example, the nature of the stable (cave, open-air, wood, etc.); whether there even was a stable; whether or not there were animals nearby; or the number of wise men. Almost certainly didn’t arrive on the night of the birth. And a star wouldn’t have been suspended right above the roofline.

2. Supply spiritual explanations for cultural practices to make them sound biblical. Like the feast wipe napkin at the feet of the buried Christ meaning I will be back. What kind of parent would you be if you didn’t give your child a Christmas present (or, in many cases, a whole roomful of them)? Or, just imagine, if you didn’t celebrate Christmas at all (like the Puritans) and go see Star Wars instead

3. Don’t be embarrassed by the Jewishness (or the Jesusness) of Christmas

4. Dubious challenges to the biblical witness to Jesus’ birth. Matthew, for example, goes out of his way to make clear that Mary was Jesus’ mother, but that Joseph was not his real father. According to Aslan, the early Christians concocted the myth of Jesus’ birth in Bethlehem in order “to get Jesus’s parents to Bethlehem so he could be born in the same city as David.” Others, such as Andrew Lincoln, deny the historicity of the Virgin Birth

5. Don’t miss the true birth of Jesus Scholars continue to debate questions such as the year of Jesus’s birth, and whether or not Jesus was born on December 25. They debate the historicity of Quirinius’s census, the year of Herod the Great’s death, the phenomena surrounding Jesus’ birth—the star of Bethlehem

Practice of the Presence of God: BEST RULE OF A HOLY LIFE

The Practice of the Presence of God: THE BEST RULE OF A HOLY LIFE Brother Lawrence’s Conversations and Letters Good when He gives, supremely good;…