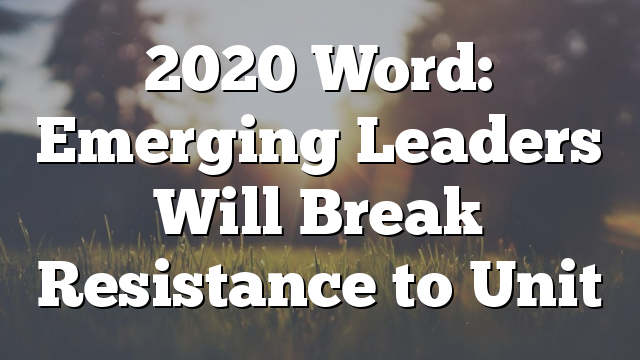 God is looking to open doors of unprecedented favour and influence for His Church in 2020. As we head towards the New Year, we must prepare for what He will do, so that we can partner with Him without compromise or delay. I believe one of the biggest areas of preparation to address is the unity of the Body.

The Lord is seeking to move through the unity of His people. However, many Christians are resisting one another’s progress. In many places twisted words have been spoken against other believers out of envy, jealousy, competition, assumption, presumption, misrepresentation, tribalism, colonialism, racism, idealism, or a sense of entitlement.

Some feel that a certain position, privilege or opportunity should be theirs and so resist those that have actually stepped out in faith for the Lord. Others have become so confused or jealous that when a church is doing well they pray against it in a critical spirit. Given the greatness of all that the Lord has entrusted His Body to steward on His behalf, this is shocking. Although this has been going on for some time and is happening even now, I believe the Lord is moving to deal with it through a generation of emerging leaders who will tackle it at its root. They will operate in a spirit of unity, releasing a fresh move of the Spirit that will make it clear to see where, how and through who divisive spirits are being empowered. They will uncover the hidden channels and access points through which murmurings, gossip, and ungodly conversations have been polluting the Church, and it will come to an end.

The Lord is preparing His Bride, and His move has already begun. Truly, the Word of the Lord is sharper than any two-edged sword. It doesn’t matter what divisive structures have been built or are in place. God is speaking grace and more grace to His Church, and He will give strength to those willing to dismantle these structures. Even the biggest of them will be broken down by His Spirit operating through delegated authority. As Zechariah 4:7 asks and declares “What are you, mighty mountain? Before Zerubbabel you will become level ground.”

God is giving us the keys to bring we need to do this. The words of Psalm 15 are one of these keys. In the Passion Translation it reads:

1 Lord, who dares to dwell with you?Who presumes the privilege of being close to you,living next to you in your shining place of glory? Who are those who daily dwell in the life of the Holy Spirit? 2 They are passionate and wholehearted,always sincere and always speaking the truth—for their hearts are trustworthy.3 They refuse to slander or insult others;they’ll never listen to gossip or rumours,nor would they ever harm another with their words.4 They will speak out passionately against evil and evil workerswhile commending the faithful ones who follow after the truth.They make firm commitments and follow through, even at great cost.5 They never crush others with exploitation or abuseand they would never be bought with a bribe against the innocent.They will never be shaken; they will stand firm forever.

Position Yourself then Stand Still

Position Yourself the Stand Still and Watch God Move – Ray E Horton “You will not need to fight in this battle. Position yourselves,…