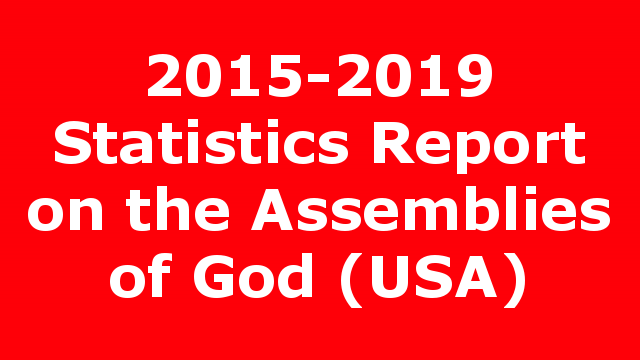 When I’m with friends from other denominations, they often ask for the AG’s secret to growth when all the other denominations’ numbers are declining. While there are some very legitimate reasons why the AG has seen sustained growth in the U.S. and globally (95 percent of the AG resides outside the U.S.), there’s a concerning statistical development on the horizon for us, too. Our latest U.S. numbers reveal that the AG is growing in churches and average attendance, but only barely. Our total number of adherents slipped majorly after 20+ years of consecutive growth. Our number of churches classified as plateaued and declining is at its highest level in nearly four decades. While the number of water baptisms has continued to climb generally, Spirit baptisms (a hallmark of the Pentecostal church and experience) have been on the decline 11 out of the last 18 years.

We often see stats as a measure of whether we’re winning or losing, growing or declining. I get that, and there’s some truth to it. We’re right to measure things because what gets measured will typically receive most of our attention, but there’s another truth here as well. As William Bruce Cameron wrote, “Not everything that can be counted counts, and not everything that counts can be counted.” Though churches and denominations report common numbers like salvations, baptisms, attendance, membership and giving, there’s more that matters than just the numbers.

Quoted from Dr. John Davidson is Director of the Alliance for AG Higher Education and Director of the CMN Leadership Development in the Assemblies of God National Office. Many of our nation’s churches can no longer afford to maintain their structures—6,000 to10,000 churches die each year in America—and that number will likely grow. The research gives a clear picture of the state of Protestant churches in America today. Most have fewer than 100 people attending services each Sunday (57 percent), including 21 percent who average fewer than 50. Around 1 in 10 churches (11 percent) average 250 or more for their worship services.

Three in 5 (61 percent) pastors say their churches faced a decline in worship attendance or growth of 5 percent or less in the last three years. Almost half (46 percent) say their giving decreased or stayed the same from 2017 to 2018.

More than 2 in 5 churches (44 percent) only have one or fewer full-time staff members. Close to 9 in 10 pastors (87 percent) say their church had the same or fewer number of full-time staff in 2018 as they had in 2017, including 7 percent who cut staff.

In 2018, few churches added new multi-site campuses (3 percent) or were involved in some form of planting a new church (32 percent). Sixty-eight percent say they had no involvement in church planting. Around 1 in 10 (12 percent) say they were directly or substantially involved in opening a new church in 2018, including 7 percent who were a primary financial sponsor or provided ongoing financial support to a church plant. “What’s your church?” In certain parts of the US it’s still one of the first questions you hear when meeting people for the first time. Yet, a new survey by Gallup finds that membership in religious congregations is plummeting. Only half (50%) of the public report that they are a member of a house of worship — church, synagogue or mosque. This represents a precipitous decline over the past few years. In 2013, just five years earlier, nearly six in ten (59%) Americans said they were a member of a religious congregation. The drop marks the first time in the history of Gallup’s polling, which stretches back to 1938, that fewer than a majority of the public reported belonging to a religious congregation.

Younger and older Americans are increasingly inhabiting completely different religious planets. Only 42% of Millennials claim membership in a religious congregation compared to more than two-thirds (68%) of Traditionalists, sometimes referred to as the Silent Generation, the cohort born in or before 1945. Even more notable than the 26-point generation gap between America’s oldest and youngest adults, is that only 57% of religious Millennials—those who identify with a religious tradition — report being members of a congregation.

Nowhere has the disparity in church membership become more acute then between Democrats and Republicans. In the late 1990s, more than seven in ten Democrats (71%) and Republicans (77%) said they belonged to a congregation. Today, fewer than half (48%) of Democrats are members of a church, synagogue or mosque while 69% of Republicans are.

The 2018 General Social Survey found that nearly one in four (23%) of Americans are now religiously unaffiliated, but twice as many members of the public no longer claim membership in a formal religious community. Moreover, while belief in God remains strong in the US — if perhaps more varied than previously thought — the vitality of religious life depends on regular association and interaction that congregational membership provides.

FacebookTwitterSubscribe
Subscribe to receive all news to your email or phone: [wysija_form id="1"]
assembliesgodreportstatisticsusa

A Prophecy and a Testimony