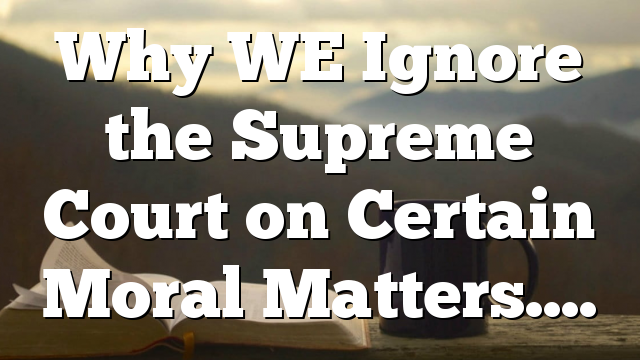 And we should ignore them on this REGARDLESS of what way they vote. Consider some things:

1) Seldom are there unanimous decisions. So we know that even at that exalted level there isn’t consensus most of the time. So we shouldn’t act like OUR views are somehow inferior to theirs. In fact, I dare say that often our moral views are far superior to theirs.

3) Is there a slippery slope? Of course. And the slippery slope here is that by ignoring the taking away of “minor” rights (e.g., praying in school, etc.), we allowed the Supreme Court to eventually do away with many protections of moral stances and/or traditional values. We absolutely should pray in school…IF THAT SCHOOL DISTRICT FINDS THAT THERE IS STRONG SUPPORT FOR IT. (And, yes, those who live in predominantly Muslim areas can pray to Allah, etc.)

Today, the First Amendment makes it so that Satanists get to open government sessions with their own “prayers.” Sooner or later, the case will be made to allow it in Congress.

Today, the First Amendment makes it so that pornography is considered protected speech, as is burning an American flag.

We simply shouldn’t accept it. After all, our views are just as important as those on the Supreme Court. In fact, they are superior because the Supreme Court feels largely compelled to follow precedents that may have led to the situation we are currently in.

Do we not count those who protected fugitive slaves as morally superior to those who hunted the slaves? OF COURSE. And yet it was the law of the land that slaves had to returned, etc.