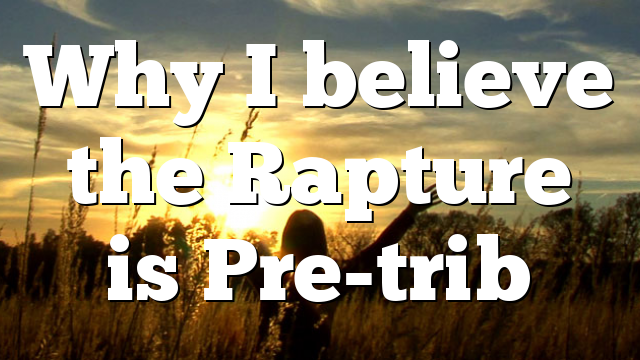 Why I believe in the Rapture taking place at Pre Tri………

THE RAPTURE OF THE CHURCH

II. The Purpose of the Rapture The purpose of the rapture is to resurrect the just from the dead and take all the saints out of the world before the tribulation comes, in order that they may have fulfilled in them the purpose for which God has saved them. Jesus told the disciples that some would escape the terrible things that were to transpire on the Earth in the last days. He said, “Pray that ye may be accounted worthy to escape all these things [of Matt. 24,25; Luke 21:1-19, 25-28] that shall come to pass, and to stand before the Son of man” (Luke 21:34-36). This passage is practically the same in essence as John 14:1-3. These two passages (Luke 21:34-36; John 14:1-3) are the only ones in the Gospels that are clear concerning the rapture. Jesus did not reveal this mystery. It was revealed by Paul many years later in 1 Cor. 15:51. The disciples did not have the slightest idea as to how they were to escape, unless they thought that Christ would deliver them from these things through His power. The how was not revealed or even mentioned before Paul explained how they were to escape. Now in the light of the mystery revealed we can see that the rapture is what Christ had in mind when He spoke of some being worthy to escape these things. The Thessalonians were taught that they could expect the living to be taken out of the world, but some were confused as to whether the dead believers would have a part in the rapture, so Paul explained in his first epistle that both the living and the dead would be caught up to meet Christ in the air (1 Thess. 4:13-18). In this passage we have the purpose of the rapture expressed “so shall we ever be with the Lord.” It is to enable the saints to escape the tribulation days and serve God in all eternity in whatever capacity He chooses. This rapture before the beginning of the Week is the first of a series of raptures that will take place during the first resurrection. Besides this rapture there will be the rapture of the manchild in the middle of the Week (Rev. 7:1-3; 12:5; 14:1-5), the rapture of the great multitude of tribulation saints (Rev. 6:9-11; 7:9-17; 15:2-4; 20:4-6), and the rapture of the two witnesses at the end of the Week (Rev. 11:3-13). The teaching of more than one rapture is not only required and stated in the above passages, but necessary to make clear what Paul meant when he said, “every man in his own order” (1 Cor. 15:20-23). The Greek for “order” is Magma and occurs only here in the New Testament. It is used in the Septuagint (Greek version of the Old Testament) of a body of soldiers and a whole army (Num. 2:2; 2 Sam. 23:13). It means a company or body of individuals. In order for every man to be raptured din his own order” or company there must be different companies of redeemed people saved and raptured at different periods. This is protest by the following facts: 1. The Old Testament Saints. John the Baptist completed this company (Matt. 11:1-12; Luke 16:16; John 3:29). In these passages both Jesus and John recognized it as being separate from the church saints. (See also Acts 7:38; Heb. 11:1-4; 12:1.) 2. The Church saints. Such passages as Matt. 16:18; 1 Cor. 12:27, 28; Eph. 1:20-23; 2:14-22; 4:12-16; 5:21-32; Col. 1:18, 24 prove that the church of the New Testament did not begin before Christ’s ministry on Earth, for He is the head and founder of it. 3. The 144,000 Jews are identified as a separate company from any others in Rev. 7:1-8; 9:4; 14:1-5. (See also Isa. 66:7-8; Dan. 12:1.) 4. The great multitude of tribulation saints are proved to be a company distinct from the above three in Rev. 6:9-ll; 7:9-17; 14:13; 15:2-4; 20:4-6.

IV. The Time of the Rapture The time of the rapture, like the second advent, is not definitely stated as to the day or hour, but we do know that it will take place before the tribulation and the revelation of the Antichrist, as will be proved in Point VII below.

Perry Stone – Bloodline of the Beast

During a special night of prophetic teaching at OCI, Perry taught this remarkable and interesting prophetic message, giving the listener detailed information on the…