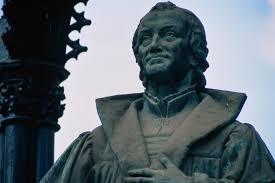 Where does the theologian look to try and explain the hand of God? Would the potato famine in Ireland reveal any mysteries? A very poor catholic people who lived in huts in a densely populated area ( about 700 per square mile ) had learned to exist on mainly potatoes. Was it by chance that potatoes had almost all the nutrition to sustain life? They were harshly treated by the protestant land managers and totally neglected by the land owners who lived back in London. And then a disease infected the potatoes; over the next few years 1.5 million Irish died from starvation.
If an old testament prophet had been writing about this; would he have put the blame on the potato farmers themselves for some moral failure? Or would some of the blame fell to the managers and landowners? Would he have said that the famine was brought on by a cruel act of nature or perhaps have emphasised that, “ my people perish for lack of knowledge?” Sometimes more recent events that have not been explained by an old testament writer gives the modern theologian greater leeway in adding his or her interpretation.

FacebookTwitterSubscribe
Subscribe to receive all news to your email or phone: [wysija_form id="1"]
theologian

The Assembling of the Saints…

Part 1 of 4 in “The Assembling of the Saints” video series. This clip tells of the first Church of God General Assembly at…