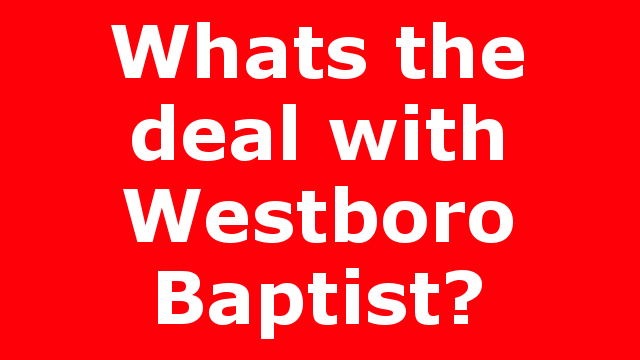 The Westboro Baptist Church is a congregation in Topeka, Kansas, started by Pastor Fred Phelps. They are an independent church, not affiliated with any denomination. They are a cultic group, believing that they alone have the truth and that you must be a member of their church to be saved. They are known for their virulent protests against homosexuality and anything and anyone they consider supportive of the “homosexual agenda.”

The Westboro Baptist Church is well known for picketing places and events they see as supporting either homosexuality or Jews. This has grown to include actual gay and lesbian events, churches and organizations they feel do not repudiate homosexuality sufficiently, and the funerals of soldiers (who fought in a war they say was caused by America’s tolerance for homosexuality). Although known in Topeka since the picketing of Gage Park in 1991, they came to national attention in 1998 after the horrific murder of admitted homosexual Matthew Shepherd who was beaten and left to die tied to a fence outside of Laramie, Wyoming. Members of the Westboro Church protested at Matthew’s funeral and his murderers’ trials and created a website saying Matthew was burning in hell.

In addition, members of the Westboro Baptist Church believe that natural disasters, terrorist attacks, and war are all God-initiated judgments on the evil in the world. They state that the 9/11 terrorist attacks in the U.S. occurred because God wanted America to enter into a war they couldn’t win, thereby losing the lives of countless soldiers. Every tragedy, they claim, is judgment because of support of homosexuality or Jews or because of attacks on Westboro Baptist Church members.

THE IMPORTANCE OF HOLINESS

[Holiness: The state of continual sanctification, the life of purity and detachment from the world and its lusts.] “Make every effort to live in…