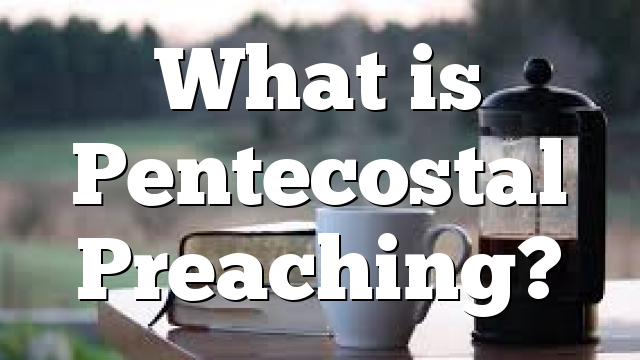 I would argue however that three things make preaching truly Pentecostal.

1. Its missionally oriented. When you look at Pentecost in the book of Acts, you cannot miss the missional orientation that governs the whole of Luke’s second volume. From Acts 1:8—which says “but you will receive power when the Holy Spirit has come upon you; and you shall be My witnesses both in Jerusalem, and in all Judea and Samaria, and even to the remotest part of the earth”—all the way to the open-endedness of Acts 28—in which Luke, the writer of Acts, intentionally leaves the reader uncertain about the completion of Paul’s mission in order to invite the reader to see themselves as part of the continuation of that mission– there is a constant theme in Acts that underscores God’s redemptive mission to the nations.

And I think at its very heart, Pentecostal preaching should reflect this missional emphasis that runs not only all through the book of Acts but also from Genesis to Revelation. Missions was a defining feature of early Pentecostalism because as people experienced the dynamic activity of the Holy Spirit in their lives they understood these signs and wonders as evidence that Jesus was coming back very soon. And so they fanned out across the globe to share the gospel with people from every tribe and tongue and people and nation. And I think Pentecostal preachers have a responsibility to pass on this eschatological urgency that has long characterized our movement and that is a major theme in the book of Acts.

And what concerns me is that while many of our AG churches, for example, have a strong missional emphasis, in many others, missions is merely an afterthought or its just one program among many. And I think we desperately need to recover the centrality of missions as it relates to Pentecostal identity because that reshapes everything that we do. It changes where and how we use our financial resources, our personnel, our buildings, and it shapes what and how we preach on Sunday morning. If Pentecost and missions are inextricably linked, and I am convinced they are, then that moves missions from the periphery of what we do to the very center of what we do.

And so not only is Pentecostal Preaching missionally oriented, but its also…

2. Christ-Centered. If you look closely at Peter’s Pentecost sermon, you realize it all culminates in the death and resurrection of Jesus. It culminates in Jesus’ resurrection and exaltation to the right hand of the Father and with the admonition that salvation is found in Jesus only and in the power of the Spirit whom Christ sends upon those who repent.

And what this means is that Pentecostal preaching is not about material blessings—though some who preach the so-called prosperity gospel have wrongly made it about that; and its not a self-help, pull yourself up by your bootstraps program. Rather, Pentecostal preaching ultimately comes down to the very biblical notion that we all need saving, that we can’t save ourselves, and that when we trust Jesus for salvation, He gives us the Spirit to help us and to empower us to follow him.

Christ-centered preaching means that the preacher is not the star of the sermon, and neither are our stories. But rather the star of the message is Jesus, and that which can only come about through Him.

And so if we are going to preach the Living Word—that is, Jesus, then our sermons have to flow from the written Word, or Scripture. And as a missionary I’ve had the privilege of visiting lots of churches and hearing lots of sermons and one of the things that I’ve seen over and over is preaching in which the Bible only plays a minor role, and in which Jesus only plays a minor role, and sometimes no role at all.

And that brings me to our third point…

3. Its Spirit-empowered. Where the Word is the Spirit is and there is an expectation that God is alive and well to heal people, to set them free from all kinds of bondage, and to deliver them from the things that oppress them. Peter’s whole reference to Joel 2 emphasizes the centrality of Spirit empowerment as something that God desires to give to all who turn to Him. And the main part of this Spirit empowerment is prophecy—proclamation of the gospel, that as we receive the gift of the Spirit, the Spirit empowers us for global witness. And throughout the book of Acts, we see that this Spirit-empowered proclamation often involves signs and wonders that continue to attest to the truthfulness of the gospel and to the breaking in of the kingdom of God upon the kingdoms of the world. And so we see for example the healing of the beggar in Acts 3, in Acts 5 we see Peter’s shadow healing people, and we see the apostles miraculously released from prison, and we see Stephen’s vision of Christ as he’s being stoned, and we see Paul’s vision on the road to Damascus and Peter’s vision of clean and unclean foods, and we could go on and on talking about the dynamic activity of the Spirit to perform signs and wonders as the gospel is preached and the kingdom of God advances.

And I think what is especially important here as it concerns Pentecostal preaching is that signs and wonders and the proclamation of God’s word often go hand in hand in the book Acts. In other words, where the Word of God is proclaimed, the Spirit of God is present to save and heal and deliver.

And I think there can be little doubt that Luke portrays the early church as a Charismatic community. Now, cessationists will sometimes argue that these signs and wonders were only needed to authentic the writing of the New Testament and that once the canon was complete, these signs and wonders were no longer necessary. But this really runs up against a major problem when we recall that Peter framed what was happening in terms of “these last days” in Acts 2. And we are still living in the last days. The last days are from the time of Jesus resurrection until the time of His return. And I think Luke goes to great lengths, through Peter’s citation of Joel 2 to underscore that these last days are the age of the Spirit. And in fact that is exactly what Jesus promised his disciples would be the case both in the Gospel of John when He promised them the paraclete to be their helper and in Luke-Acts wherein the Spirit is framed as the promise of the Father for the post-resurrection church.

I am convinced that if Pentecostal churches would take steps to recover these aspects of Pentecostal preaching, we might see some of the same success that characterize the early church and that has been a hallmark of the expansion of global Pentecostalism. And I think we need to be constantly on guard when it comes to the issue of miracles to 1) remember that miracles and signs and wonders are not every something we have a right to demand, nor are they something that the Bible portrays as dependent on us as though the sovereignty of God was somehow limited by our actions, but 2) to not lose this expectation of miraculous intervention as it relates to the church’s missional mandate.

We ought to have an expectancy that God might show up when and where His Gospel is preached.