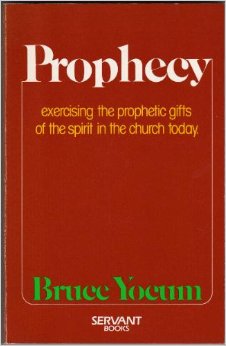 What Happened to Freedom to Prophesy in Church?

Is it just me, or is it rare to find a church where regular believers who have the gift of prophecy to just give a prophecy in a meeting without breaking some kind of rule the pastor or pastoral team has set up?

I spent some time in an Independent Full Gospel church and about 6 years in the A/G in the 1980s, and a few years in Congregational Holiness in the 1990’s and a bit of time in the COG. In most of those churches, during the song service at the beginning, from time to time, someone would prophesy or there would be a tongue or interpretation. The congregation and pastor would be reverent and listen.

But I attended a local large A/G for quite a while at night here in Hawaii and haven’t seen it. One of the Foursquare megachurches I spent time in here doesn’t have it, and I hear they don’t allow it in the main service. One of the pastors of a Foursquare church plant said if someone had a prophecy, they could tell one of the pastors who would pass it on to him and he’d consider whether to allow someone to share it. Another church from an evangelical denomination whose pastor believes in the gifts and has prophesied in church had the same sort of rule. I talked with a brother who went to another church that would invite prophets to come to the church, but had the same rule of passing prophecies to the pastoral staff who said they’d let you know if you could share it later, but never got back to you.

The Bible doesn’t say to run prophecies through the pastor. I don’t see how setting up such a rule as that is consistent with obeying I Corinthians 14:29-31

29 Let the prophets speak two or three, and let the other judge. 30 If any thing be revealed to another that sitteth by, let the first hold his peace. 31 For ye may all prophesy one by one, that all may learn, and all may be comforted. 32 And the spirits of the prophets are subject to the prophets.

If there are false prophecies, I can see why the elders of the church would jump in like Titus 1 teaches about false teaching. But it doesn’t make sense to me that pastors would think that the Holy Spirit has to ask their permission to speak.

David Dietrich [09/28/2015 4:56 AM]
This type of control is not Biblical… We are losing our Pentecostal Distinctives.. The Gifts of the Spirit are allowed to be fully operative in the Independate Pentecostal Church we attend Miracle Revival Church in Lykens Pa. Pastor Bobby Saville. The gifts are for the edification of the body and the vocal gifts are to be spontaneous. Let the Holy Spirit move and have His way. Too many are wrapped up in their own agenda and program. Church has become a performance and entertainment exercise. We need a Move of God! I totally agree with you my brother.

David John Maxfield [09/28/2015 7:11 AM]
Our church prophesies all the time, it’s what it was built on 🙂 we just had a phophet as a guest speaker and the accuracy of his ministry and prophetic words were amazing! Like freaky accurate to the point where he knew what my friends wife looked like and she wasn’t even there lol wow

Lee Hall-Perkins [09/28/2015 7:20 AM]
In some COGIC churches women who have the gift of prophecy or are in the office of prophet prophesy during worship services without restriction. It is not as common as it once was. Interpretation of tongues is rare to see now. It’s also rare to see men who are not the pastor to prophesy.

Charles Page [09/28/2015 11:49 AM]
Today the Spirit gives the Pastor the interpretation because of the charismatic confusion, the prophetic word of the Lord must come from the platform, usually elevated above the congregation.

Jon Ruthven [09/28/2015 12:42 PM]
The very architecture (row on row, with “leader up front”) and the political structure of “church” is semi-consciously designed to focus power in the hierarchy, and not fulfill Paul’s (and Moses’) wish that “I wish you all spoke in tongues, but rather that you prophesy.” This is the fulfillment of the suppressed citation of Acts 2:39, which is probably the programmatic prophecy of Acts: Isa 59:21. See, Ruthven, “This Is My Covenant with Them” for support.

Link Hudson [09/28/2015 4:39 PM]
Terry Whiles, are the ones with different definitions of prophesying doing any better at how their churches follow the BIblical commands? For example, do those churches that think that prophesying is preaching scripture have two or three preachers or sermons per meeting? Usually not in my experience.

Terry Wiles [09/28/2015 9:54 PM]
Have they seen hundreds of people saved and disciples? Have the trained hundreds of pastors and built hundreds of churches around the world. Are the people practicing the use of spiritual gifts that build up the body? Are they forming a community of believers that sacrificially love one another? Are they growing in grace and the knowledge of the Lord Jesus?

Link Hudson [09/28/2015 9:59 PM]
Terry Wiles, you could say ‘yes’ to those questions regarding a number of church movements with different practices on this issue. The Pentecostal movement has seen an explosion of evangelistic growth since the recovery of the practice of many of these spiritual gifts. I’d venture to guess that Pentecostals have grown faster in the past century than Reformed churches have.

He said at a previous church, he asked one of the pastors if he could prophesy. He said yes, but the senior pastor shut it down when other people asked if they could prophesy.

The protocol to share a prophecy was to walk down to the front, tell one of the pastoral staff who wasn’t speaking. There was a good chance they would say they would get back to you and never do it.

I suggested one way to handle this kind of control would be to say, “And if I don’t share it, the blood will be on your head.” Okay, that’s probably not appropriate to say unless it is a part of the word. Biblically, there may be a case for adding that. But it might be effective with some people, at least for a while.

Starfire A Freefilly [09/29/2015 12:11 AM]
our pastor at assemblies in Angola Indiana is a pastor that allows the spirit of God to move, without alter calls , it is hard for salvation there must be time spent together at the alter in prayer, for then the Lord will surely come and f he is invited in HES COMES

2016 U.S. Presidential Race Cheat Sheet John Kissinger [11/03/2015 9:41 AM]Jon Sellers give us the scoop on US politics this week pls! https://www.whitehouse.gov/blog/2015/10/28/enhancing-national-preparedness-space-weather-events