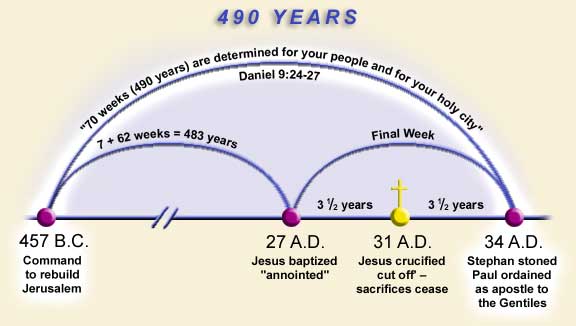 “SEVENTY ‘SEVENS’ are decreed for your people and your holy city to finish transgression, to PUT AN END TO SIN, to ATONE FOR WICKEDNESS, to BRING IN EVERLASTING RIGHTEOUSNESS, to SEAL UP VISION AND PROPHECY and TO ANOINT THE MOST HOLY PLACE.” (Dan. 9:24) [It is believed that the ‘seventy sevens’ are seventy sets of seven years each or 490 years. The ‘seventy sevens’ decree is divided into three parts: ‘seven sevens’, ‘sixty-two sevens’, and the final ‘seven’. The ‘seven sevens’ refer to the 49 years that follow the 70 years of Babylonian captivity. This was the time allocated to restore and rebuild Jerusalem and for the minor Old Testament prophets to speak. The ‘sixty-two sevens’ or 434 years follow the 49 years and is the silent gap between Old Covenant and New Covenant. The Anointed One refers to Jesus Christ when he was baptized in the Jordan River and revealed to Israel by John the Baptist. The final ‘one-seven’ is divided equally where the first half represents the 3 1/2 year earthly ministry of Jesus Christ and the second half represents the 3 1/2 year period of Great Tribulation at the end of this age. The “middle of the seven” separates the two halves and conceals the Church age beginning from Pentecost until the present day.] “After the sixty-two ‘sevens,’ the Anointed One will be put to death and will have nothing. The people of the ruler who will come will destroy the city and the sanctuary. The end will come like a flood: War will continue until the end, and desolations have been decreed.” (Dan. 9:26) [This was allotted to the 3 1/2 year earthly ministry of Jesus Christ which began when he was baptized by John the Baptist and revealed to Israel (Dan 9:25) Jesus was chosen by God to rule the nations but was rejected and “cut off” just outside of Jerusalem when the perfect Lamb of God became the Passover Sacrifice on the cross of Calvary (Dan 9:26)] “Then Jesus came to them and said, “All authority in heaven and on earth has been given to me. Therefore go and make disciples of all nations, baptizing them in the name of the Father and of the Son and of the Holy Spirit, and teaching them to obey everything I have commanded you. And surely I am with you always, to the very end of the age.” (Matt. 28:18-20) [AD 70 Jerusalem and the Second Temple were destroyed by the Roman army and this put an end to the Old Covenant priestly system of sacrifice and offering. AD 1933-45. The spirit of antichrist in Hitler murdered two-thirds of all living Jews in Europe. AD 1948 Israel was re-established as a sovereign state among the nations. When will the end come?] “But about that day or hour no one knows, not even the angels in heaven, nor the Son, but only the Father.” (Matt. 24:36) [But this we do know!!!!] “YOU ARE WORTHY, OUR LORD AND GOD, TO RECEIVE GLORY AND HONOR AND POWER, for you created all things, and by your will they were created and have their being.” (Rev. 4:11)

Be blessed as you praise The Lord, knowing that ALL AUTHORITY IN HEAVEN AND ON EARTH HAS BEEN GIVEN TO JESUS!
-Bill Stockham