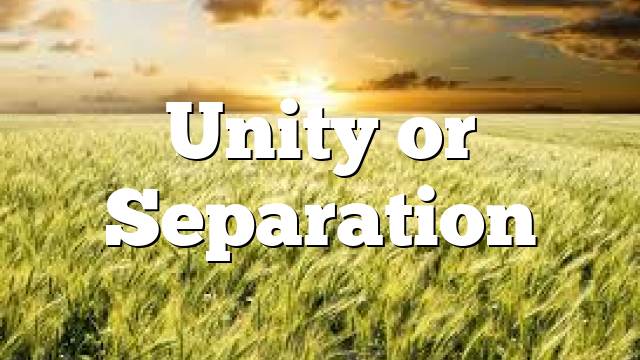 “Come out from among them and be separate, says the Lord. Do not touch what is unclean, and I will receive you” (2 Cor. 5:17). Some Christians often are good at using out-of-context scriptures to prove their opinions. Here is a case in point. I’ve heard this scripture used as a basis for brethren and churches to split, despite Jesus’ call to unity. Are we to call other believers and churches unclean because we don’t agree with their doctrine?

Are we to call other believers and churches unclean because we don’t agree with their doctrine?

Let’s look at the context here. Verse 14 reads “Do not be unequally yoked together with unbelievers.” Paul is telling the Corinthians here, that (even though we love and minister to the world) not to be yoked with unbelievers, where we would be influenced by their ways, as can be seen in Vs. 16, “And what agreement has the temple of God with idols? For you are the temple of the living God.”

Don’t be yoked with unbelievers

Only to the degree that people or churches are unbelievers are we to “come out from among them,” not be a part of them or yoked with them in order to avoid the ways of the world. We should not use this scriptures to separate from fellow believers even if we don’t agree on everything; rather, we are to maintain the unity of the spirit and respect one another’s differences that are not in conflict with the essence of the Gospel.

That is where the power of believers and the church worldwide is to influence the world. “They will know we are Christians by our love.” And that is one reason the world doesn’t respect and laughs at the church – all our divisions.

For example, the church I am a part of is spirit-filled, charismatic; yet, we love to participate with an evangelical church in town that outreaches with Operation Christmas Child. We are more Word of Faith oriented, yet we fellowship and even worship with churches with a more prophetic or apostolic orientation. Those types of differences are not and should not be enough to separate us as brothers and sisters. Same with my Facebook circle. Many of the Christian friends I don’t agree with on everything, but I love them as brothers and sister.

Let’s not use God’s Word out of context to prove the other wrong.

The Bible doctrine of sin