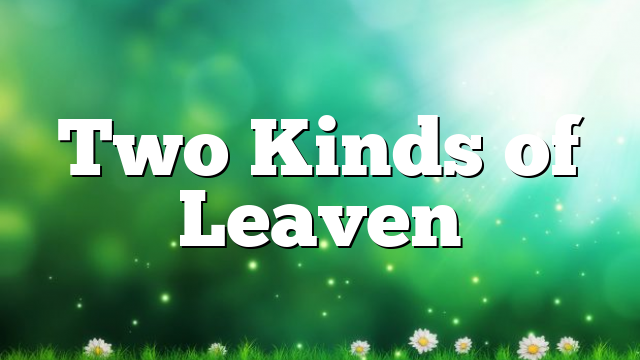 There is another kind of leaven that Jesus warns about in Matt. 16. Verse 6 reads: “Then Jesus said to them, ‘Take heed and beware of the leaven of the Pharisees and the Sadducees.'”

Let us let our leaven be the Kingdom within, His grace empowerment, rather than the hypocrisy of trying and pretending to live by our own good works

What is that leaven? Verse 12 tells us: “Then they understood that He did not tell them to beware of the leaven of bread, but of the doctrine of the Pharisees and Sadducees.” What was that doctrine? Jesus’ answer is read in Luke 12:1, “… ‘Beware of the leaven of the Pharisees, which is hypocrisy.‘” The hypocrisy of keeping the law. It can’t be done in the flesh, yet they self-righteously acted holy while putting burdens on others to do what they couldn’t. Isn’t a lot of legalistic religion like that?

Jesus further explains in Mark 7:6, “He answered and said to them, ‘Well did Isaiah prophesy of you hypocrites, as it is written: ‘This people honors Me with their lips, but their heart is far from Me.'”

Let us let our leaven be the Kingdom within, His grace empowerment, rather than the hypocrisy of trying and pretending to live by our own good works and expecting others to do the same.

FULLER theological in the major news