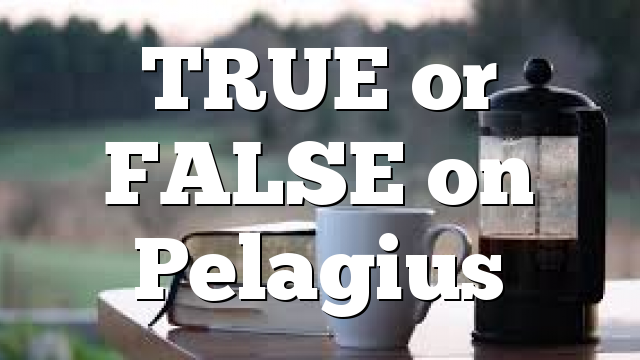 Historians believe that Pelagius was born in Britain around the year 354. We know little about his early years, but do know that at some point he became a monk and in that capacity journeyed to Rome. While in Rome, Pelagius began to write theological works, though, except for a few fragments, these have been lost and are known to us only through quotes in the writings of those who refuted him. He began to promote a rigorous asceticism, apparently out of concern for the moral laxity he saw among many Roman Christians. This austere lifestyle made him attractive to many Romans and he soon gained a considerable following. One person in particular, a lawyer named Celestius, became a devoted follower and promoter of Pelagius’ teachings.

It is said that at one time Pelagius heard a quote from Augustine’s Confessions—“Command what you will, and give what you command”—and blamed such teaching for the lack of morality in the church. He believed that Augustine was teaching doctrine contrary to a biblical understanding of both grace and free will and believed such teaching turned man into a mere automaton. Contrary to Augustine, “Pelagius taught that human beings have a natural capacity to reject evil and seek God, that Christ’s admonition, Be ye perfect, presupposes this capacity, and that grace is the natural ability given by God to seek and to serve God” (Theopedia).

When the Visigoths attacked Rome in 410, Pelagius and Celestius fled together to Carthage in North Africa. Pelagius’ influence began to spread there as well, causing concern for Augustine who responded by publishing several works that refuted and counteracted Pelagius. After a couple of years in Africa, Pelagius moved to Palestine and Augustine promptly warned Jerome that Pelagius was spreading a seditious heresy. Jerome, too, labored to prevent this false teaching from spreading in the East.

In 416 the church in North Africa held two separate synods to examine Pelagius’ teachings and both of them condemned him. Their results were sent to pope Innocent I for his decision, and upon receiving them he excommunicated Pelagius and Celestius. However, less than two months later, pope Innocent died and he was succeeded by Zosimus. Pelagius and Celestius asked Zosimus to reconsider the previous pope’s decision. When he did so there was alarm in North Africa and yet another synod was immediately convened to beg him not to repeal the prior pope’s sentence until it could be proven that the two men had clearly denounced their false beliefs.

Zosimus listened to these pleas and commanded that another council be convened to consider and decide the matter. In May of 418, the Council of Carthage once again branded Pelagianism as a heresy and Pelagius was expelled from Jerusalem. He settled in Egypt, and was never heard from again. In 431, at the Council of Ephesus, Pelagius and Celestius were officially declared heretics by the entire church.

Pelagius believed that man had not been entirely corrupted by Adam’s fall and that he could, by his own free will, do works that pleased God, and thus be saved. This led Pelagius to deny the doctrines of original sin and predestination, and to deny the need for special grace to be saved. Essentially, he believed that man is basically good and moral and that even pagans can enter heaven through their virtuous moral actions.

Monergism summarizes it this way: “Jesus Christ was a good example. Salvation is a matter chiefly of following Christ instead of Adam, rather than being transferred from the condemnation and corruption of Adam’s race and placed ‘in Christ,’ clothed in his righteousness and made alive by his gracious gift. What men and women need is moral direction, not a new birth; therefore, Pelagius saw salvation in purely naturalistic terms—the progress of human nature from sinful behavior to holy behavior, by following the example of Christ.”

Though church councils condemned Pelagianism as heresy, this did not immediately crush the teaching. In the early church, Pelagianism was carried on by Julian, Bishop of Eclanum, one of eighteen Italian bishops who refused to sign the papal decree and who were consequently exiled. To advocate Pelagianism was to battle Augustine, and Julian did this until Augustine’s death, though he was never able to gain as great a following as Pelagius. Over the next century or so, Pelagianism broke out a handful of times, but the councils condemned it so consistently and strongly that by the sixth century it had been nearly eradicated.

Pure Pelagianism has not resurfaced in a major way during the past fifteen hundred years, but a modified form took root in the sixteenth century through the teachings of Jacob Arminius whose beliefs are often described as semi-Pelagian. Semi-Pelagianism teaches that while humanity is tainted by sin, we are not so tainted that we cannot cooperate with God’s free offer of grace. Calvinists tend to describe Arminianism as a form of semi-Pelagianism, though Arminians tend to consider the label unfair.

Perhaps the closest modern-day successor to Pelagius was Charles Finney. Like Pelagius, he denied original sin saying, “Moral depravity is sin itself, and not the cause of sin.” He believed the whole notion of a sinful nature is “anti-scriptural and nonsensical dogma” and taught that we are all born in a state of moral neutrality, able to choose between good and evil—to choose between being good or being sinful.

What the Bible says

The Bible teaches that we were created to be good, but because of Adam’s fall we are all born in a state of total depravity—spiritually dead in our sin—and that we are wholly dependent upon God’s supernatural grace for salvation and new life. Our wills are not free to do what is righteous or even to desire to do what is righteous. We need to be born again by God before we can begin to do even the least deed that is pleasing to God. (See, for example, Ephesians 2:1-9, Titus 3:3-8, and Romans 6:17-18.)

Today, Orthodox Christians confidently proclaim, because of the disobedience of our first parents, Adam and Eve, all of creation is fallen; we are all born in sin and guilt, corrupt in our nature and unable to keep God’s law (New City Catechism, Answer 14).

Looking for the RIGHT Pentecostal church?

Hi guys, hope you can help me? Me and my family fellowship at a very traditional style church (brethren roots) and we feel it…