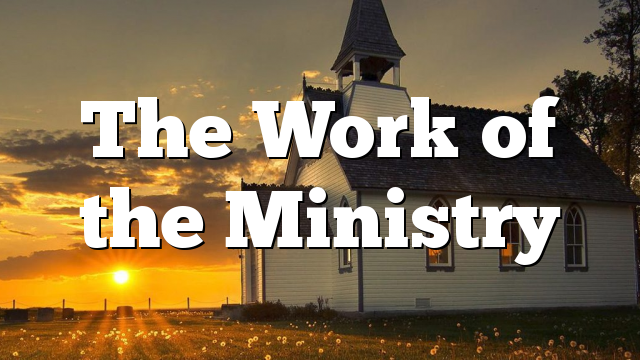 THE WORK OF THE MINISTRY – Ray E Horton

In much of religion, we see the leadership overseeing, but not setting the example for the people. There is a very real fallacy in clergy-laity separation, which we often see in even non-hierarchical churches. That is not the example that Jesus set.  Leaders in the church are there to serve, not to be served.

There is a balance. In some churches, the pastor is expected to do all the work, from preaching the sermon to mowing the grass, while in others, the congregation is expected to wait on the pastor’s every need. Both are wrong.

In some churches, the pastor is expected to do all the work, from preaching the sermon to mowing the grass, while in others, the congregation is expected to wait on the pastor’s every need. Both are wrong

That may come from something as simple as a misplaced comma in the King James Version of Eph. 4:11, where it says church leaders are “for the perfecting of the saints, for the work of the ministry, for the edifying of the body of Christ.” Most translations do not place a comma after “saints.” For example:

Note the difference. Church leaders are not called to do all the work of the ministry, but to equip the saints (God’s people) to do it. That is what edifies or builds up the church. Theirs is primarily an equipping role.

Yet, it also does not say that God’s people are being equipped to mow the church lawn, but, rather, for the ministry gifts to which each one of us have been called. See verse 7: “But grace was given to each one of us according to the measure of the gift of Christ.”

Equipping to the Ministry Area Where Called

Too often, the work of the ministry is conglomerated into an unscriptural outsized gift of helps, including everything from participation on the praise and worship team, to working in the nursery, to cleaning the church toilets. In fact, however, helps is not a generalized gift but a very specific calling.

The work of the ministry for which the people of the church are to be equipped is not to just help the church leaders with things that have to get done, but to do that to which they have been called and graced.

Meanwhile, church participants will be much more willing to do that which the church leaders are willing to do, setting the example. The leaders are not above or in some way better than the rest of the people. It is just that their primary role is different.

QUESTION about the HEBREW words describing metals and actions of the 4th beast in Daniel 7:7ff [Att all resident Hebrew scholars in the group…