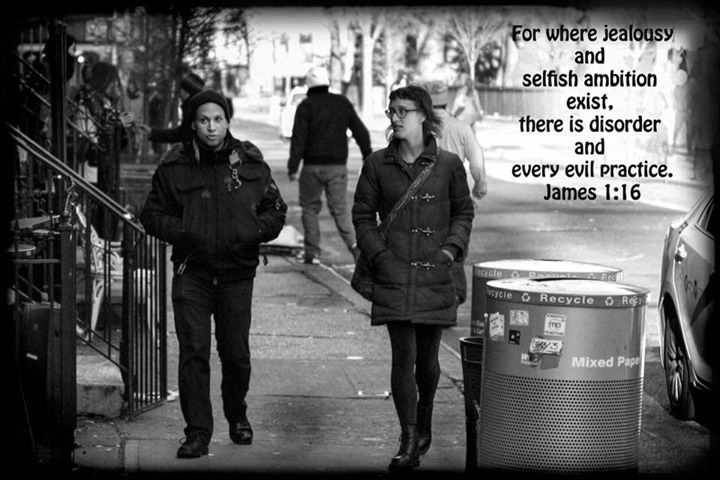 “For where jealousy and selfish ambition exist, there is disorder and every evil practice.” (James 1:16)

Driving home yesterday, I was listening to a “Christian” radio program. I find them fascinating, because I’m often amazed at the self-righteousness that I hear. These “perfect” individuals are very good at finding fault in others.

Yesterday’s topic was the movie, “The Shack.” Of course it was. The controversy surrounding it creates an engaged audience, and increased listenership. The dollars usually follow. On the verge of tears, the various speakers were begging their audiences to boycott the movie. They viciously attacked the author, who was not there to defend himself. And they did all this with such passion and fervor that many listeners were probably duped into believing that they actually care.

If you plan to see the movie, you might want to stop reading this, because I will disclose a few things about it that you might not want to know yet.

I saw the movie last week. We sat in a packed theater, and there was not a dry eye in the house, from beginning to end. There were definitely some interesting “surprises,” especially seeing God being played by a woman. And for the most part, that is what all the ruckus is about.

The other main complaint is that it preaches “universalism,” which is the belief that all mankind will be “saved,” regardless of their beliefs. I didn’t see any evidence of this in the movie. I haven’t read the book, so I don’t know if it’s discussed there. But “universalism” was not a theme of the movie called, “The Shack.”

Getting back to the cast of characters, for most of the movie, God was played by a woman. He was also played by a man, but this radio show didn’t mention that, because they were only interested in talking about the controversial things. They tossed around words like “heresy” and “idolatry.” Here’s one thing they never mentioned. Not once. And it’s vital. But they didn’t talk about it because it would have completely invalidated their argument. And here it is. The story wasn’t real. It was a dream.

Yes, a dream. Can God speak to us through our dreams? Of course He can. When a man has lived a life of being abused and scarred by other men, can God temporarily appear as a woman in our dreams, to appear more comforting, only to reveal His masculinity later on? Sure, why not? God can do what He wants to do. His way works. Who gives us sleep? He does (Psalm 127:2).

The Holy Spirit was played by a woman. So what? It was a dream. I found two things very disturbing about the commentary coming out of my car’s radio. The focus was less about God and the Holy Spirit being played by women, and more about their ethnicities. Complaining about the actress playing the role of God wasn’t enough. It wasn’t just that she was a woman. She was an African-American woman. They kept saying it over and over again. Apparently, saying “woman” wasn’t enough to make their point. And the Holy Spirit was of Asian descent, specifically Japanese. Again, that’s all they focused on. This is what bothered them. I was embarrassed by their commentary, and even more so by their blatant racism.

Here’s one thing they didn’t talk about. Not even once. Yeshua (Jesus) was played by an Israeli man. What a brilliant concept, to portray Him as He actually was! I’ve never seen it done before. Usually He’s played by a light-skinned man with a British accent. They didn’t discuss this, because once again, it didn’t suit their agenda.

The hypocrisy coming out of the mouths of these people on the radio broadcast was blatant. They were judge and jury, performing duties that belong to God, including judging the author’s heart and intent. What a shame. Perhaps they should read James 4, verses 11 and 12.

Again, I stress that I didn’t read the book, which came out nine years ago. The main theme of the movie was forgiveness, letting go of pain and giving it to God.

God is not a woman. The word is very clear about that. But He is all-powerful. And He is wise beyond any wisdom we can understand. It is impossible to see that movie and not be moved by the story. As a believer and as a student of the Word, I paid close attention to everything in it. It wasn’t a factual Biblical movie, nor was it portrayed as one. It was a dream.

Are the people behind the voices on the radio jealous of the success of the movie? I don’t know. Do they have selfish ambitions? I don’t know that either. But God does. And if their motives aren’t pure, they’ll have to give account for their careless words (Matthew 12:36), and there were plenty of them.

Does the author have evil intent? Only God knows. But I enjoyed the movie, and I recommend it. It didn’t distance me from God. If anything, I felt closer to Him. This movie is not going to teach you anything about the gospel. But it is a great lesson in forgiveness. Of course it wasn’t real; most movies aren’t. But even our Messiah used parables to teach us, because sometimes we need an exaggerated story to get the message. And His message is good.

Have a great day everyone!