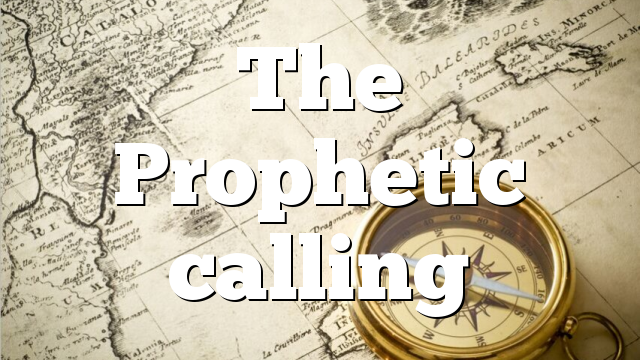 The prophet is a poet, singer, etc. There is tremendous much artistic forms in which the word of God is communicated. Art, poetry and music are important means by which God encounters people. We should widen our way, by which we approach the Word of God.

Jeremiah had an encounter with God, we see that right at the beginning. We are talking of a range of years from 640 to 586/587BC, the landmark date of the fall of Jerusalem. Josiah started reigning ca. 640BC.

When we talk about an encounter of God, then it is very fitting to say that the word of God is coming on somebody. It is easy for God’s people to drift away from the relationship and covenant inheritance, the supernatural experience of God’s presence to a point where they forget what this experience was all about. That happened then and happens today. It is possible to read prophetic experience and not having a clue, what it is all about.

The same is when we read that the “Word of God came upon the prophet”. To get the Word of the Lord on somebody is very unique, and is part of the prophetic call and experience.

The simple phrase that the Word of the Lord came on somebody is powerful.

The term rbd (word, event) as well as the term hsm (burden, oracle) is used. hsm is more adequate of a description what happens. hsm – is the burden of the Lord, or a spoken Word of God (also oracle).

God spoke to Hosea and wants to bring a message/word to the people. Before that the Lord tells Hosea to marry a harlot, and have children with her. That becomes a burden for Hosea and he does not realize the message of God through him. The burden will be increased until the child/message is born.

Sometimes the Lord uses children, because he cannot come with his word to adult. Jeremiah felt very young and inadequate. Sometimes persecution is forming even a greater message within us. The Word and encounter comes into a world of academic and politic. The Word of God came into the lives of kings through the prophet. There is no dichotomy between the spiritual and the physical world. The Spirit works in the dustiness of human life. The person can not escape the real world, because the Word of God is for the real world.

In the days of the kings of Jeremiah God speaks into the world of the people.

In reading Jeremiah 1, are we re-visited by our call of ministry?

When the Word of the Lord came on Jeremiah it changed his life and ministry.

This prophetic revelation is connected to the history of the land and the kings therein. The kings were the following: Josiah, Jehoiakim and Zedekiah.

Josiah was a good king in the sequence of other evil kings. After David was Josia next to Hiskia only those through whom the Lord worked a revival.

Both cleaned out the temple, because heathen worship had come into the worship life of the people of Israel. The reason was that suppressing superpowers were importing their gods and symbols even into the temple. That was a common way of the foreign kings to master the vassal nations.

The father of Josiah was Mannasseh, he reigned 55, and made peace worshipping the gods of other superpowers.

The land of Judah laid in the middle of superpowers, between Egypt in the south and Mesopotamia or Assyria to the north and east. Especially to the north and east it was first the Assyrian in 722 BC who brought about the devastation of Israel, and they stood before Jerusalem, when Hiskia prayed to God.

In 712 BC Assyriah fell at Niniveh to Babylon. During the king of Mannasse Egypt played a major role in Judah, because there was a long time of uncertainty of who would win the day in the region.

Josiah became a king as a boy. In the 18th year of his reign a copy of the book of the law was found when cleaning up the temple. It was most probably the book of Deuteronomy, which was discovered. Josiah tore his cloth and took the book to Hulda, who confirmed the authenticity of the Word of God. That triggered a revival. This information we know from the book of Kings and Chronicles.

The book of Jeremiah does never mention explicitly Josiah’s reform, and Kings and Chronicle do not mentioned Jeremiah. That is different with the life and ministry of Isaiah.

Jehoiakim comes to the throne in 609 BC, because Josiah dies on the battlefield. It is strange that Mannasseh, who was wicked reigned so long, and Josiah who was rightous was cut short and he was killed.

Jehoiakim reigned a decade, and this is the most active ministry of Jeremiah as well. He had to content with the Babylonians, and bowed to their gods. But the vassal kings Jehoiakim revoltet and his own kingdom killed him in a pursuid to please the Babylonians. The Babylonians made Zedekiah king.

Zedekiah reigned 597-587, which was a terrible decade, and it was the last decade of the kingdom of Judah in the land. In 587 the Babylonians were capturing Jerusalem. Jerusalem is made uninhabitable and destroyed.

A new governor named Gedalia is put in charge of was is left, they set up camp in Mispah. The Babylonians had offered Jeremiah to go or to stay, because they had heard about Jeremiah and wanted to favor Jeremiah.

The most important background of Jeremiah is the destruction of Jerusalem and the taking of captivity.

In the opening verses (1:3) we read that the time of the book was until the exile, and Ch.40-44 make reference to the years following the destruction. Why is that? Because the book is not about chronology, but measures everything over against the mature exile event.

The book is by the word of Jeremiah, which is by the Word of God. The Word of God speaks about the mega-event, that is taking place. Everything else that happens in the book happens in relationship to Th exile event.

That is the main thrust of the book as well as of ch.1.

Jeremiah’s mission was to carry the bad news of the judgement of God over Jerusalem. He proclaimed the death of Jerusalem, and a particular worldview.

Hezekiel, who is in the exile still tries to convince the Jews that this is of God.

Josiah is cleaning up the land.

The words that Jeremiah bore came not against a worldview, but against a God-view, of who God is and who’s God like. This is what Jeremiah was fighting about, against the God-view of his people.

Jeremiah also struggled against the God-view he was opposing. He struggled how God was breaking into the mindset of people. Already in ch.1 we see the struggle within Jeremiah.

Jeremiah allows us to see the struggles of Jeremiah himself.

Toward a Pentecostal understanding of Anabaptist Landmarkism

For several years I have been striving to understand Anabaptist’s views. Theological they reject anything Roman Catholic and particularly Baptismal regeneration. Anyone desiring to…