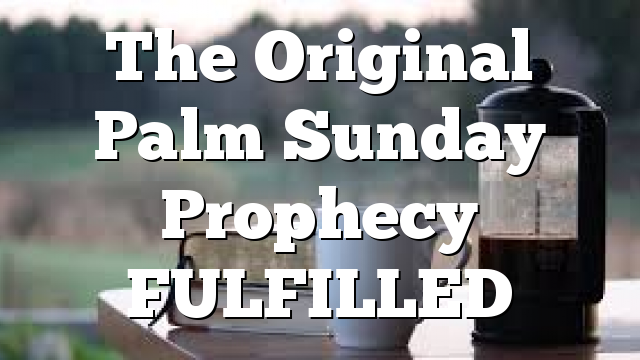 Sunday we celebrated what is commonly known as Palm Sunday where we celebrate the triumphal entry of Jesus into Jerusalem.

Palm Sunday begins what is referred to as the “passion week” covering the events leading up to the crucifixion and ultimately, the resurrection of Jesus.

If you are not familiar with the account, you can read about it in Matthew 21:1-11. There you’ll read about crowds of people greeting Jesus. Jerusalem was full of people from all over who had traveled to Jerusalem for the passover week. It was like the chosen city for a Super Bowl, or Augusta, GA during Masters week (which is the week after Easter this year :). People were there from all over to witness these amazing events.

There’s much to say about Palm Sunday and how the people of Jerusalem saw Jesus as an earthly king coming to overthrow the oppressive Roman government and re-establish the glory of Jerusalem from the time of King David.

What they didn’t realize then was that Jesus first had to suffer and die. The same people who shouted “Hosannah!” at the triumphal entry were shouting, “crucify him!” just a few days later. All of this was fulfillment of prophecy, and that’s what I would like to point out here.

Jesus fulfilled over 300 prophecies at his first coming, but what many people don’t know is that Daniel chapter 9 provided the EXACT DAY the Messiah would be revealed on what we call Palm Sunday.

In Daniel chapter 9 we are told that it would be 483 years (of Jewish 360 day years) from the command to rebuild Jerusalem to the coming of Messiah the Prince. In Nehemiah 2, Artexerxes gave Nehemiah permission to go and rebuild Jerusalem. Biblically we know exactly what year this was (Jewish month of Nisan of Artaxerxes’ 20th reigning year) and from historical Babylonian records we know this command was actually on March 14, 445 BC.

483 years later—to the exact day—brings us to April 6th, AD 32, the date of the triumphal entry! From Artexerxes command to rebuild, to the day of the triumphal entry was exactly 173,880 days. (Chuck Missler/Koininia House have done a ton of background research on this to verify the dates.)

What’s really interesting is that up until this moment, Jesus resisted any praise or worship. He told demons to be quiet. He told his mother that his time had not yet come. He asked why a rich young ruler called him good. He avoided the messianic spotlight throughout his earthly ministry—until now. At the triumphal entry, Jesus said if people didn’t praise Him as the Messiah then the stones would cry out. Jesus knew this was THE time prophesied by Daniel in Daniel 9.

The study of Bible prophecy opens up a whole new world of excitement as we see prophecies predicted hundreds of years in advance being fulfilled to the exact day. No other religious book can make this claim. Bible prophecy proves the reliability and divine nature of the Bible.

If you are a believer, this is our season to rejoice as we consider how God’s plan for the first coming unfolded exactly as predicted to win our salvation and secure our future. We can rejoice thatthe prophecies of the Lord’s return will come true in the same manner. God is a promise-keeper and His word will not fail.

If you are not a believer, please consider the witness of Bible prophecy to the veracity and reliability of Scripture. Who but God could write such a book that predicts future events that come to pass in exact detail? I challenge you (in a friendly, loving way) to look into these things for yourself. Try to prove them wrong. Test them to see if they are true. Use your God-given ability to think logically and see if these things are true. If I can help you in anyway, please contact me. Even if you disagree with me and want to disprove the claim that Bible prophecy verifies the claims of the Bible—I’d love to hear from you. Doubts are a good thing—as long as we investigate them honestly.

Humanity Introduction in the New Pentecostal Catechism by Henry Volk

There can be no assurance of the remission of sins but in the holy Catholic Church. It is to faith unfeigned, and the use…