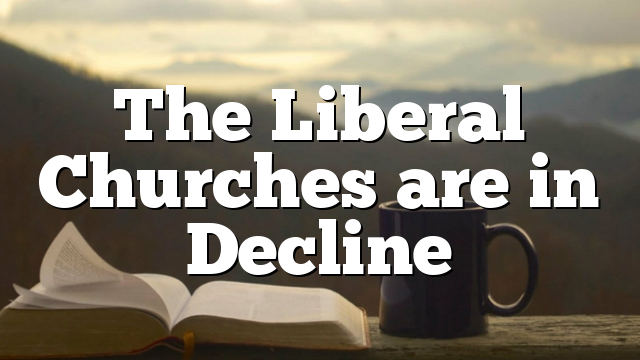 Do churches decline without reason as though captive to impersonal forces of nature?

Perhaps so. At least according to a recent article in Minneapolis Star-Tribune.It reviews dying Mainline (i.e. liberal Protestant) Churches in Minnesota. There are a couple cryptic references to growing evangelical churches. And the Catholic Church’s in-state membership has nearly held steady amid national growth.

But the contrast between receding liberal churches and more vibrant traditional ones is never explored.

Unsurprisingly, this indifference to cause and contrast is common among Mainline Protestant elites. They routinely ignore or minimize their half century of perpetual decline. At their recent denominational conventions, both the Episcopal Church and Presbyterian Church USA largely pretended all was well. Meanwhile, they doubled down on radical political, theological and sexual stances.

These stances are unmentioned in the Minneapolis Star-Tribune piece. It states:

The article reports church closings in Minnesota are “leaving a void in communities where churches frequently house child care, senior programs, food shelves, tutoring and other services.” Sadly, no doubt.

Church attendance is plunging nationally. Remaining worshipers are increasingly white headed, the article asserts. It makes America sound like Russia after the Bolshevik Revolution. It further reports that the Episcopal Church, Presbyterian Church USA and United Church of Christ have lost nearly half their memberships nationally since 1990. The Evangelical Lutheran Church in America has lost one third.

Not every denomination or church is fragile. Some smaller evangelical denominations in Minnesota, such as Assemblies of God, and some megachurches report continued growth.

Then it insists: “But as a whole, even membership in the evangelical churches has plateaued, according to the Hartford Institute and other studies.”

Of course, “plateaued” is not the same as dying. And why is the Assemblies of God, a Pentecostal denomination growing? According to its website:

The USA AG has experienced 27 consecutive years of growth in adherents. The Fellowship is 54 percent under the age of 35 and more than 42 percent ethnic minority.

These numbers contrast sharply with dying Mainline churches with nearly all white, white-headed, congregations. The Assemblies of God with 3.2 million members is now larger than five of the seven Mainline denominations. And it’s larger than the Episcopal Church and Presbyterian Church USA combined.

What about those growing megachurches the article briefly cites? How did they become “mega” if religion is dying in Minnesota? Such questions go unanswered. Instead, there is a long litany of vignettes from shrinking and shuttered churches leaving a trail of tears and despondency. The cause of their demise is never explored.

The Minneapolis Star-Tribune never mentioned that most of Mainline Protestantism is theologically liberal. Or that it largely shuns evangelism in favor of political and social causes.

“Church was a bedrock of daily life,” the article mournfully observes. “Its absence leaves a large gap — spiritual, social, emotional — that for many seems almost impossible to fill.”

Meanwhile, there’s another cryptic reference to an apparent exception to church death in Minnesota. A Lutheran church that is closing is still hoping “for a positive ending. They are pleased that a nearby church without a building has made an offer on their property.”

Hmmm, a congregation without a building implies it is a relatively new church plant. Perhaps it is renting space from a school or another church. But now its congregation apparently has sufficient members and finances to buy an existing church building. Who is this mysteriously growing church? And why are they thriving while the Lutheran church is closing?

Again, more unanswered questions. Perhaps the answers would disrupt the narrative of inevitable church death, in Minnesota and ultimately nationwide.

Answers at the Church Conventions

The article focuses on Catholic churches closing in Minnesota. It admits that their two percent membership loss in state is far below Mainline Protestant losses. And the Catholic Church nationwide has grown 14 percent nationally since 2000 while Mainliners lost one third of members. Why?

Answers to some of these mysteries might be found at the Presbyterian Church USA General Assembly meeting last month and the Episcopal General Convention meeting this month. At their current rates of decline neither denomination will exist in 20 years. Yet neither convention focused on evangelism or church growth. Episcopalians debated whether to compel a handful of dissenting traditional dioceses to host same sex nuptials. They also discussed editing their liturgies to become more gender neutral. Presbyterians denounced Israel and USA border policies, opposed religious liberty in favor of LGBTQ and abortion rights, and pondered whether to divest from fossil fuels. A senior church official claimed there’s increasing excitement in their denomination over “ justice” issues. No doubt. They lost 68,000 members last year.

The Minneapolis Star-Tribune never mentioned that most of Mainline Protestantism is theologically liberal. Or that it largely shuns evangelism in favor of political and social causes. So lack of new church members should be no surprise. Particularly interesting is that United Methodism in Minnesota, more liberal than elsewhere, has declined twice as fast as nationwide.

Nor did the newspaper mention that Mainline denominations, after abandoning Christian sexual teachings, suffered schisms and accelerated membership losses. Instead, the liberal Mainline’s implosion is conflated with religion’s overall collapse. The wider story is more complex and not as sad.

But the article is right that declining historic churches have left an enormous social and cultural void not easily filled. Their demise is a tragic loss to Minnesota and America. Traditional churches are growing. But they can’t easily replace denominations that after two or more centuries of stately service are now committing virtual suicide.