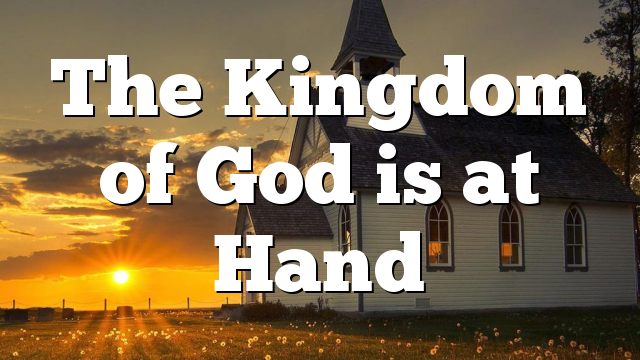 THE KINGDOM OF GOD IS AT HAND – Ray E Horton

Most people see the term “Gospel” as referring to an account describing the life, death, and resurrection of Jesus of Nazareth. If so, how is it that Jesus Himself told people to believe in the Gospel before He ever went to the cross? Mark 1:14-15 reads: “…Jesus came to Galilee, preaching the gospel of the kingdom of God, and saying, ‘The time is fulfilled, and the kingdom of God is at hand. Repent, and believe in the gospel.‘”

Jesus came to Galilee, preaching the gospel of the kingdom of God

I believe the answer is this: The word “gospel” translates as “good news.” What good news was Jesus preaching? It was that “the kingdom of God is at hand.” That is what they were to believe and turn to – Himself, the King, bringing in the Kingdom. That is still the Good News today.  The King is with us, and the Kingdom of God is at hand.  And we need to turn to Him and away from worldly things and be fully involved in His Kingdom here and now.

Called to be Fishers of Men

A little further on, in vs. 17, Jesus tells Peter and Andrew, the fishermen, “Follow Me, and I will make you become fishers of men.” When Jesus calls us, it is for the same reason; He disciples us to become “fishers of men” to bring in the fish, the harvest. That includes all who be willing to follow Him.

He died and rose again out of love for all the world and wants all to be saved. Therefore we are called to “go” and “make disciples,” in the power of the Holy Spirit, since the Kingdom of God is at hand.

Then vs. 18 reads, “immediately they left their nets and followed Him.” Are we willing to do the same, leave all that distracts us and follow Him? We were Born Again and filled with the Spirit, but have we been following Him?

In studying the Book of Acts, you’ll see that when folks were filled with the Holy Ghost, they began to speak with other tongues….