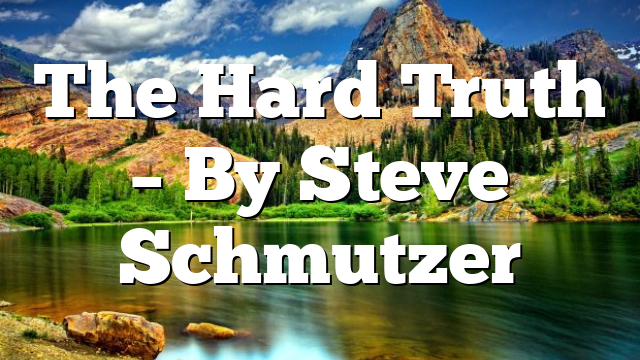 I have little idea where this post is going to go. I guess I’m partly writing it as a personal catharsis, and so I advise you – I’m not feeling warm and fuzzy.

I’m not a gambler, but if you asked me to pick up the dice and roll ’em, I’m going to tell you America is done. No single issue prompts me to say that, but rather many of them.

America is hurtling down a steep one-way road with no U-Turn on the map. It is experiencing a comprehensive and catastrophic moral collapse. Read Romans 1:18-32. It’s basically today’s news, and it makes one point clear: America is so far gone that it’s already experiencing the wrath of God. It is done.

I don’t see any valid “if’s” on this issue anymore. The most qualified questions are those that responsibly weigh the “when’s” and “how’s.” America is now marinated in lies and depravities of the sort that – not long ago – used to cower in the closet and carefully pick their disguises before daring to crack the door.

Patently obvious deceptions now proudly parade in the public forums. Intentional fraud is welcomed at every level of our governing structures. Myriad efforts are being expended to ruin anyone or anything that speaks the truth or shows the facts. Many millions of dollars are spent on marketing, policy, and PR campaigns to advance exactly the sort of corruption, evil, injustice, and debauchery that God routinely – and forcefully! – judged in the Scriptures.

We live in a time where the agendas of depopulation, immorality, lawlessness, intolerance, and tyranny are celebrated – while efforts to support virtue, common sense, law and order, free speech, and personal responsibility are ridiculed. Children have become a key target in all of this. They are the victims of every vile form of wickedness imaginable, and legislation is even being proposed to legitimize these evils.

This nation’s descent is breathtaking to see. We’re rocketing so quickly into a sticky morass of wickedness that you can almost hear the sonic boom.

It doesn’t help that so much of our nation’s population is woefully uninformed – – and it helps even less that they choose to stay that way. There is a vast swath of our society that refuses to spend one calorie of energy to study the truth and confront their ignorance. It’s so much easier for them to attack the facts instead.

It’s that ‘safety in numbers’ thing that seduces them to float downstream with the dead fish – – to hurl themselves off the cliff with the rest of the ignorant lemmings.

But the gravity of this situation is so in-your-face that it’s now impossible to overlook. One must WANT to not see it for what it really is.

Honestly, I expect this sort of foolishness from those who have rejected God. Romans 1:28 makes the case that those who have done this end up with minds that don’t work like they’re supposed to. They’re as dumb as a frying pan. There’s a direct connection between their consecutive choices and their constant idiocy.

So again – I expect such darkened people to do precisely what they’re not supposed to do. I expect them to reject common sense laws and values that find their source in God’s divinely inspired Word. I expect this from the masses that want nothing to do with a right relationship with Jesus Christ. Their whole motive is to energetically go in the opposite direction instead – no matter the consequences to themselves or to others, or their self-evident displays of ridiculousness.

Perhaps that’s why this entire situation gives me another very specific discomfiture. Maybe it’s why I’m saying all these things in the first place – because the bigger picture is even worse.

You see, this whole problem extends well beyond that group we typically expect to applaud fraudulent elections, promote fabricated ‘science,’ or support foolish laws. This problem is much bigger than the bunch who cuts off their genitals, wears masks while driving alone, waves rainbow flags, conceals their violence under black hoodies, touts BLM, or sets up filthy communes in public places.

Here’s the hard truth. There are plenty in the church who have already made it clear they identify more with the postures of those who show they have rejected God than they do with anyone who diligently seeks to be in a right relationship with Jesus Christ.

I’ve heard pastors foolishly claim wearing a mask is a sign of worship. I’ve heard other pastors chide their congregants for wanting secure borders, for supporting responsible conservative values, and for not accepting plainly fraudulent ‘medical science.’ I’ve had conversations with church leaders who vigorously support the ‘Palestinian cause’ and a ‘two-state solution’ over all clear Biblical instructions to the contrary.

I’m just scratching the surface of all the ways I’ve seen church leaders lose their moorings.

Furthermore, there is no shortage of “Christians” who march for BLM, advocate for LGBTQ lifestyles, embrace gender rebranding, and promote the fallacy of climate change which lies at the heart of globalism. All of this shows glaring faults in the integrity of their faith since this bunch are “Christians” who also pick their way through the Scriptures like they are at a buffet – – ignoring what they don’t like and overindulging in what they most want.

That’s the part that gnaws at me and causes me no end of frustration. The truth is there for them to know it, but so many within the church are woefully uninformed – – and they choose to stay that way. There is a large proportion of “Christians” that refuse to spend one calorie of energy to study the full counsel of God’s Word, to humbly yield to its instructions, and to confront their ignorance. It’s so much easier for them to run with the packs that believe as they do and attack the truth instead.

The standard pew-warmer today desperately needs a carnivore diet (1 Cor. 3:2), but as Paul lamented, many of them can’t handle it. Just as Paul recognized young believers needed “milk” instead, so I think he would chastise those churchgoers today who have obstinately remained content with a lactose diet. Hebrews 5:12 states we should be striving for “solid food,” but most “Christians” and their leadership would much rather sip their doctrines through a straw.

A leading giveaway of such “Christians” is their inability to perceive the present times for what is really happening and for what they really mean. If we take 2 Timothy 4:3 at face value – and I do! – then it’s less of an ‘inability’ than it is a ‘refusal.’

This passage makes it clear such “Christians” will not tolerate hearing the things from God’s Word that they MOST need to hear. They will consciously embrace the “fables” instead that are the values and choices of this world.

They do this by “gathering around them teachers to suit their own passions.” That means such “Christians” will openly support pastors, teachers, and other church leaders who show they are not yielded to the full counsel of Scripture, and who evidence by the things they say that they have dangerously “conformed to this world” (Romans 12:2). It also means such “Christians” will isolate and berate any other pastors, teachers, and other church leaders who call their choices into proper Biblical accountability.

Churches and “Christians” who behave in this manner are living proof that we are indeed in the last days. The Bible calls these folk “scoffers” in 2 Peter 3:3. This bunch is noted for ridiculing the things of God they want no part of, for denying the truth of Scripture when it confronts their choices, for following their own evil desires over the clear counsel of God’s Word, and for mocking those who wait for, long for, and earnestly study the issues around the Second Coming of Jesus Christ.

Jude goes one step further in Jude 1:18. He makes it clear that churches and fellowships will greatly suffer under the influence of these kinds of scoffers because they create division and introduce erosion. They may imagine themselves to be church leaders, they may imagine they are giving priority to the things they ought to be giving it to – – but Jude adds, “they do not have the Spirit” in vs. 19.

I’ve come full circle to my opening comments. The prognosis for this nation is not good. You may choose to disagree with me on that – – but I urge you to “be as the Bereans” (Acts 17:11) and examine the Scriptures for yourself. This exercise will clarify all current events through the wisdom of God’s Word.

The post The Hard Truth – By Steve Schmutzer appeared first on Rapture Ready.

Police in Copenhagen say they have shot dead a man they believe was behind two deadly attacks in the Danish capital hours earlier. Police…