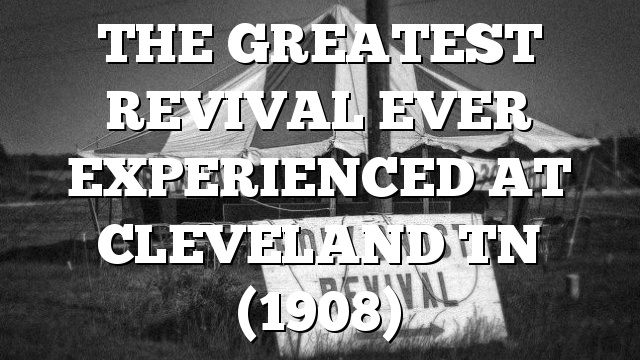 August 16:
There were 1,500 people at the tent…Before I preached, a Baptist preacher… took my stand and for few moments claimed that his body sinned but his soul was pure…holding up for a sinning Christian life, but when it came my time the Lord helped me to cut him up with the Word, and I asked him to go to the altar and get salvation, I guess about fifty at (the ) altar.
August 18:
A large number in the altar…three received the baptism of the Holy Ghost…some men tried to run from the tent and fell outside under the power. Tonight was the greatest meeting and most powerful, and a sweep of the Holy Ghost came down in the most wonderful way with manifestations and miracles, of any meeting I was ever in…
August 20:
Seven professions and five received the baptism of he Holy Ghost… mayor of the city served a paper on me…asking me to close the meeting at about 10:00 o’ clock or be arrested. We prayed earnestly, and I told the officer about the matter…officers came…(gave) their protection, God gave great victory…over sixty piled into the altar.
August 25:
One woman was under the power for about six or seven hours.
August 28:
Possibly sixty-five or seventy-five came to the altar. One man fell under the power and was carried into the altar…he was a leader in the Baptist church in the city, but he got the baptism of he Holy Ghost and arose speaking in tongues.
September 10:
(no preaching) A special time of weeping fell on some of the workers during the testimony service and I called for a special concert intercessory prayer, which lasted for several minutes, and a little later at an opportune time I stepped up on the altar and, as I did so, I seemed to see a kind of blue vapor or mist settle down on the congregation and people turned pale, and as I made the altar call seventy-five or a hundred piled in very quickly…the fire is spreading more and more in every quarter of the city and for miles in the country.

This powerful kind of revival stirred the whole city of Cleveland. The city was under conviction for several weeks after that. The revival continued…

The Significance of Syria In the Bible Prophecy Today

Is the Syria of Today the Assyria of the Bible? In that day there will be a highway from Egypt to Assyria. The Assyrians…