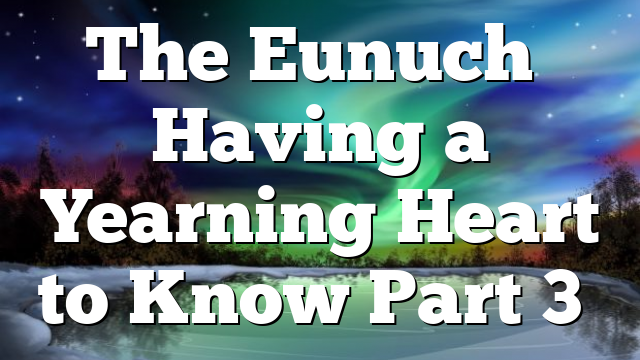 The Eunuch… Having a Yearning Heart to Know Part 3

34 And the eunuch, answering Philip, said, “I ask you, about whom does the prophet say this, about himself or about some other?”

35 And Philip opening his mouth, and beginning at this Scripture, brought to him the Good News: יהושע of Messiah!

36 And as they were going on the way, they came to some water. And the eunuch said, “Look, water! What hinders me from being immersed?” 37 And Philip said, “If you believe with all your heart, it is permitted.” And he answering, said, “I believe the Son of Elohima to be יהושע the Messiah.” 38 And he commanded the chariot to stand still. And both Philip and the eunuch went down into the water, and he immersed him.

It was the ‘Church Era of Disgrace’ on the 1st coming of the Messiah. The ‘leaders’/Priest/Phariees…etc kept Truth from the congregation of His coming. Now we see an eunuch still confused from ‘church teachings of Jerusalem’, he missed the first coming and wondered if it happened or when will it be! The humble and searching heart of the eunuch caused the Father to have Philip explain the Scriptures concerning the Messiah! After that, eunuch wanted to be baptized immediately. Philip said only ***if*** you believe with all your heart! The eunuch already ‘knew’ his Father… by Love, faith, trust, prayer, reading, obeying His law, he just came from worship in Jerusalem from a long way from home, the only thing missing was ‘who is the Messiah’? he only needed to know who the Messiah is, what He did & then get baptized. Not sure if he had any sins to confess, it seemed he was already faithfully loving and obeying the Father’s Way & Truths… already in His heart and mind. He only didn’t understand the last Lamb that was sacrificed for his sins. The Scriptures doesn’t say he confessed his sins and then baptized, but a good chance he did confess. But he believed the Messiah is the Son of Elohim and was baptize.

Today, it’s the opposite for most people, they don’t know the Father and Messiah but are baptized and should search for Truth continually, like the eunuch! The ‘growing’ can take years if influenced by Rome through Christianity, some may never find Truth, but one of the good promises of the Father is, a ‘remnant’ will be saved/found His Truth. But ‘happy is he’ when he/we do! To be like the eunuch is a blessing: to hear the Word, Way and Truth and joyfully believe from the heart! And continue on down the narrow path that leads us to eternal life as the eunuch did … after Philip revealed Truths & then left him.

God and America at the U.S. Capitol