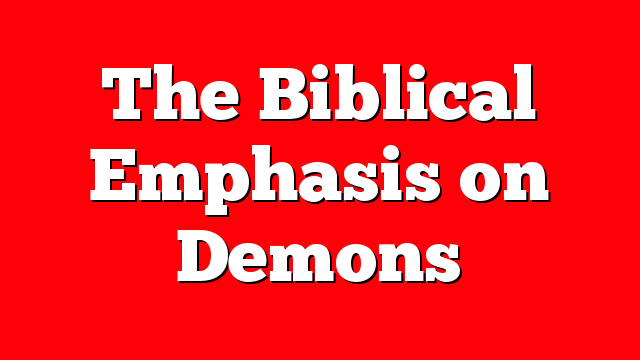 Much of the content of the Gospels of Matthew, Mark, Luke and John is centred on how Jesus
ministered to people. In these four Gospels approximately one third of the verses that concern His
actual ministry focus on how Jesus cast out demons. There are ten times as many verses devoted to
Jesus’ ministry of exorcism as there are to His miracles of raising the dead. There are seven times the
number of verses devoted to stories of Jesus casting out demons as are devoted to His cleansing of
lepers. There are far more verses in the Gospels that tell us about deliverance from demons than there
are about salvation from sins. In fact Jesus spends more time casting demons out of people than
healing the sick and performing miracles combined. 3 However, from listening to what is preached
and taught in most churches today you would not be aware of how great an emphasis the Gospels
place on the deliverance ministry. A major portion of the book that is called the Acts of the Apostles is concerned with how the early
church dealt with demons. In fact in the book of Acts no single subject has more verses devoted to it
than how the early church dealt with demons. Since this was the major focus of the ministry of Jesus
and the early church, it should also be very important to the church today.
Deliverance from demons is not a minor ministry. Deliverance from demons was at the core of
Jesus’ ministry to the needs of the people and was in fact His most important public ministry. Most
Christians know that Jesus came to bring salvation, but I think most Christians usually construe
salvation to mean that we will “go to heaven when we die”. But the fact is that most of the salvation
that Jesus provided applies to the “here and now”, not to the future. Salvation from sickness,
salvation from leprosy 4 and salvation from demons are three types of salvation that apply to our lives
now, not after we die. As He travelled about the land of Israel, the primary salvation that Jesus
provided for the Jews was salvation from demons. Most of the people whom Jesus ministered to
were Jews; they were people in a covenant relationship with G-d. In fact we only have two cases
where Jesus cast demons out of Gentiles (unbelievers). Furthermore, it was generally not ‘crazy’ or
dysfunctional people who Jesus cast demons out of. In most cases the people we see Jesus ministering
deliverance to were people who attended the synagogue, regularly worshipped G-d, and from all
outward appearances were quite normal.
The Hebrew Scriptures (the Christian Old Testament), contain a lot of teaching about demons.
Because of their knowledge of the Hebrew Scriptures, the people to whom Jesus preached and
ministered were familiar with and understood the Biblical teaching about demons. Most of this
knowledge is lost to Christians because they rarely read the entire Scriptures and do not understand
much of what they read.
Before we study the subject of deliverance from demons in the New Testament, we must
understand the Biblical concepts of demons that began in the Hebrew Scriptures so that we have the
same pre-understanding of demons and deliverance that the Jews had during the time-period of the
ministry of Jesus.