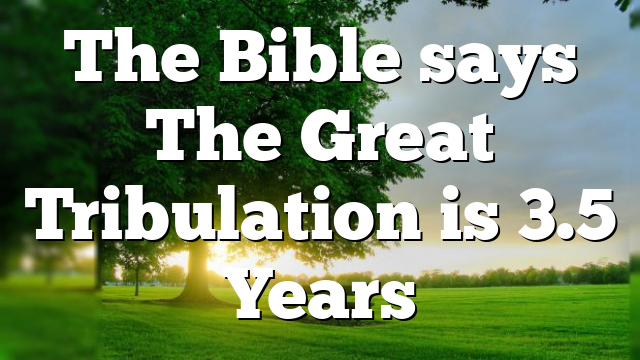 The Bible says The Great Tribulation is 3.5 Years. 8 TIMES

Daniel 7:25 He will speak against the Most High and oppress his holy people and try to change the set times and the laws. The holy people will be delivered into his hands for a time, times and half a time.

Revelation 11:2 But the court which is without the temple leave out, and measure it not; for it is given unto the Gentiles: and the holy city shall they tread under foot forty and two months.

Revelation 12:14 The woman was given the two wings of a great eagle, so that she might fly to the place prepared for her in the wilderness, where she would be taken care of for a time, times and half a time, out of the serpent’s reach.

Daniel 12:7 The man clothed in linen, who was above the waters of the river, lifted his right hand and his left hand toward heaven, and I heard him swear by him who lives forever, saying, “It will be for a time, times and half a time. When the power of the holy people has been finally broken, all these things will be completed.”

Revelation 11:3 And I will appoint my two witnesses, and they will prophesy for 1,260 days, clothed in sackcloth.

Revelation 12:6 The woman fled into the wilderness to a place prepared for her by God, where she might be taken care of for 1,260 days.

Daniel 12:11 “From the time that the daily sacrifice is abolished and the abomination that causes desolation is set up, there will be 1,290 days.