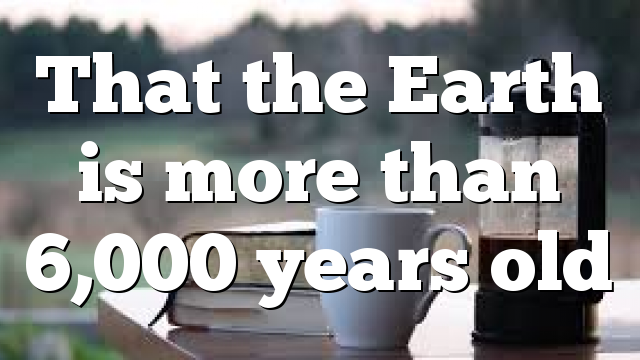 This is true. There have already been 6,172 years from Adam to 1948, as we shall see in our future lessons. Not only this, but the Bible teaches that there was a social system on the Earth that was destroyed by a great flood long before Adam. This flood is pictured in Gen. 1:2 as covering the Earth, before the six days in which Adam was created. It is also mentioned in Ps. 104:5-9. Peter speaks of it as “the world [Greek, kosmos, “social order”] that then was, being overflowed with water, perished: but the heavens and the earth, which are now [since the six days of restoration], by the same word are kept in store, reserved unto fire” to be purified, resulting in “a new heavens and a new earth” (2 Pet. 3:4-13).

The cause of the first flood before Adam was the fall of Lucifer and the rebellion against God of one-third of His own angels, along with the people who lived on the Earth over whom Satan ruled. That Satan ruled the Earth and led an invasion into Heaven to cast God out, is clear from Isa. 14:12-14; Ezek. 28:11-17; Lk. 10:18; 1 Tim. 3:6. The devil was defeated and the Earth was then cursed and placed under water as in Gen. 1:2; Ps. 104:5-9; 2 Pet. 3:5-7. All life was totally destroyed, including birds, men, vegetation, and all cities were destroyed in which the pre–Adamites lived (Jer. 4:23-26). In the restoration of the Earth in six days, as in Gen. 1:3–2:25, God told Adam to “replenish” the Earth. Adam and Eve were the first inhabitants of this present creation.

1. The following facts prove that the term “in the beginning” in Gen. 1:1 refers to the original creation of the heavens and the earth, and does not refer to the time or work of the six days of Gen. 1:3 — Gen. 2:25;

(1) The word “and” is used 153 times in Gen. 1 — Gen. 2 to separate the 102 independent acts of God. The “and” of Gen. 1:2 proves that the work of Gen. 1:2 is entirely independent of the work of Gen. 1:1. While Gen. 1:1 records the original creation of the heavens and the earth, Gen. 1:2 records the original dry land, or earth, made into chaos and flooded through a great catastrophe which destroyed all life on a pre-Adamite earth.

(2) The word “was” in Gen. 1:2 is from the verb to become, not the verb to be, proving that the earth became waste and empty since its original creation and habitation in the beginning. See note on “was,” Gen. 1:2.

3. The earth is called “dry land” in Gen. 1:10 which means that Gen. 1:1 could read, “In the beginning God created the heaven and dry land.” Since it was created dry, it stands to reason that the flooded condition of Gen. 1:2 was a curse, not a creative act. According to Ps. 136:6 the earth was originally “stretched above the waters,” not covered by them (see note, Ps. 136:6). This requires a pre-Adamite race whose sin brought such a curse.

4. In Gen. 1:2 the earth is not only flooded with water but covered in total darkness, causing all life on earth to be destroyed. This requires a pre-Adamite world with vegetation, birds, animals, and human beings as proven in the notes on Jer. 4:23-26.

5. Gen. 1:2 reveals that the earth, waters, and darkness were already in existence before the work of the six days which began in Gen. 1:3 and continued until the earth was restored to a second habitable state in 2:25. Thus, it is clear from Gen. 1:1-2 (and related scriptures) that:

(1) In the beginning — the dateless past, not six thousand years ago — God created the heavens, including the sun, moon, and stars. See note, Ps. 136:7.

(2) At the same time God also created the earth or dry land.

(3) The heavens and the earth were created by God, a personal and an eternal Being. They were not the result of a cosmic accident.

(5) Both the heavens and the earth were created before the earth was flooded.

(7) The waters that flooded the dry land were created in the beginning along with the earth, to cause the dry land to become productive (Job 38:4-30), not to curse the earth as in Gen. 1:2.

(9) The earth alone was cursed, flooded, and filled with darkness — not the heavens (Gen. 1:2). We therefore conclude that Gen. 1:1-2 proves a pre-Adamite world that was destroyed in a flood, requiring the making of the present Adamite world for God’s original purpose for the earth to be realized (Isa. 45:18).

6. Gen. 1:2 reveals the Spirit of God moving on the flooded earth to restore dry land. This confirms that the pre-Adamite world was destroyed, making it necessary to restore the earth to a second habitable state.

9. The fact that Lucifer had already ruled the earth and become a fallen creature before Adam‘s time is proof that Adam and his race were not the first ones on earth. We must acknowledge that Satan’s fall was before Adam‘s time, because he was already a fallen creature when he came into Adam‘s Eden (Gen. 3; 2Cor. 11:3). Hence, he must have fallen with a pre-Adamite creation.

10. According to Isa. 14:12-14, Lucifer actually invaded heaven from earth, hoping to defeat God and take His kingdom; but Lucifer himself was defeated and his kingdom cursed. Before his defeat, he had a throne, implying a kingdom and subjects to rule over. His kingdom was under the clouds, under the stars, and under heaven — therefore, on earth. Having weakened the nations over whom he ruled, and wanting to be like God and take His place in heaven, Lucifer led the invasion of heaven. All this had to be be in Adam‘s day, because no such things have occurred since Adam was created.

11. Ezek. 28:11-17 pictures Lucifer before he fell, as the anointed cherub or protector of the earth, full of wisdom and perfect in beauty, ruling in a garden of Eden (before Adam), created by God and perfect in his ways up to the time of his fall. The passage gives both the reason for his fall and the results. The only time this could have been true of Satan was before the days of Adam, thus proving a pre-Adamite world.

13. Ps. 104:5-9 speaks of God sending a flood on the earth after its creation, at which time the waters stood above the mountains. Ps. 104:7 identifies this as Lucifer’s flood, saying “At Thy rebuke they fled.” In the case of Noah’s flood, the waters slowly and naturally abated. Furthermore, Ps. 104:9 makes it clear that this flood was at a time when God set a boundary for the waters “that they turn not again to cover the earth,” and that is what happened in the six days’ work of Gen. 1:3 — Gen. 2:25. Thus, Ps. 104:5-9 refers to the same flood as Gen. 1:2 and proves the existence of a pre-Adamite world which was overthrown by a flood.

14. Turning to the New Testament we find that Jesus taught the fall of Satan from heaven in Lk. 10:18. When did he fall? Before Adam‘s time, because he was already a fallen creature when he came into Adam‘s Eden (Gen. 3). Why did he fall? Because of pride and wanting to exalt his earthly kingdom above God’s (Isa. 14:12-16; Ezek. 28:11-17). What was the result of his fall? All of Satan’s earthly subjects as well as over one third of God’s own angels fell with him (Rev. 12:3,7-12); and all nations were totally destroyed, along with vegetation, fish, fowl, and animals (2Pet. 3:5-7). Thus, Lk. 10:18 substantiates the teaching of Old Testament passages regarding a pre-Adamite world.

15. Jesus further taught the overthrow of the pre-Adamite world by plainly stating that the world had been overthrown. See note, Mt. 13:35.

16. Paul also taught the overthrow of the pre-Adamite world (Eph. 1:4; Heb. 4:3; 9:26; see notes at these scriptures and the note on Mt. 13:35). In Col. 1:15-18 he made it clear that there are thrones, principalities, and powers in heaven and in earth, visible and invisible. It shouldn’t be difficult to believe that Lucifer was given one of these thrones and a kingdom to rule over, before he fell. That his kingdom was on earth in a pre-Adamite period is indicated by the fact that he returned to the earth after his fall and brought about the downfall of the new ruler, Adam. Why all this desire to usurp man’s dominion on earth if the earth was not at one time Lucifer’s place of rulership? Even his eternal punishment will be in the lake of fire under the earth, which further proves his sin was in connection with the earth — and when else could that have been but at the time of a pre-Adamite world?

17. Contrasting “the world that then was” with the heavens and the earth “which are now” Peter spoke clearly of a social system overthrown before Adam. See Pre-Adamites.

18. John also referred to the overthrow of the pre-Adamite world, as is clear from the note on Rev. 13:8.

Thus, it is clear that both the Old Testament and the New Testament give proof of a pre-Adamite world. Scientific findings of prehistoric animals and human beings, the age of the earth, and other facts are consistent with the Biblical revelation of a pre-Adamite social system. There are many questions which cannot be answered apart from a belief in the pre-Adamite age. How did Lucifer become the devil and the prince of demons? When did he weaken the nations, ascend into heaven to exalt his throne above the stars, and fall from heaven as in Isa. 14:12-14? How did demons originate, for what purpose, and when? What caused the calamity of Gen. 1:2; Jer. 4:23-26; Ps. 104:6-9; and 2Pet. 3:5-6? Why was hell prepared for the devil and his angels as stated in Mt. 25:41, and why was it located beneath the earth (Mt. 12:40; Eph. 4:7-11)? Why was Adam told to “replenish” the earth and not merely to plenish it? These and other questions go unanswered apart from a belief in the pre-Adamite world.

Confessions of a Train Preacher