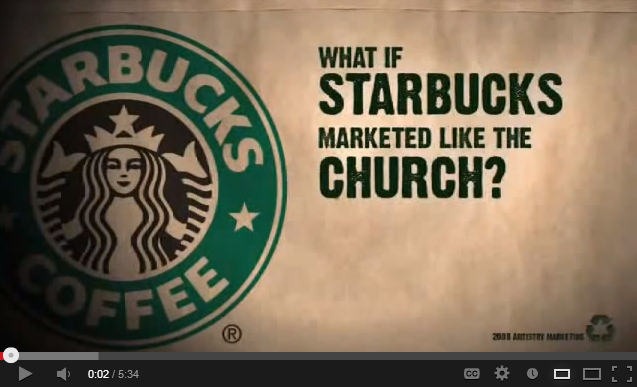 Something to think about. In recent weeks a lot has been said about the “Starbucks Coffee issue”.

1) Churches Would Have Stellar Signage

2) Churches Would Not Use Confusing Language Flashback: (Examiner) – At the Starbucks annual shareholders meeting on Wednesday, CEO Howard Schultz sent a clear message to anyone who supports traditional marriage over gay marriage: we don’t want your business. After saying Starbucks wants to “embrace diversity of all kinds,” he told a shareholder who supports traditional marriage that he should sell his shares and invest in some other company.

According to a report by Forbes, Schultz seemed a bit intolerant of any Starbucks shareholders who opposed gay marriage for moral or religious reasons. During the meeting, shareholder Tom Strobhar (who founded the Corporate Morality Action Center) pointed out that after the company voiced its support for a referendum backing gay marriage in Washington state, a boycott by traditional marriage supporters caused a drop in sales revenue. Schultz told him “You can sell your shares in Starbucks and buy shares in another company” if he did not agree with the company’s pro-gay marriage stand.

Despite strong opposition from the religious and political right, support for gay marriage in America has risen in recent years. The rise of support for gay marriage has also seen a rise of intolerance for those who oppose it. Many who joined the boycott of Starbucks last year were dismissed as bigots, even though the boycott did cause revenue to drop. A website, DumpStarbucks.com, has earned tens of thousands of supporters who refuse to buy from the coffee chain in response. – Examiner: Starbucks CEO: If You Support Traditional Marriage, We Don’t Want Your Business

Happy New Year! L’Shana Tova 5778 This is going to be a very exciting year! Let’s go through each point that God gave for…