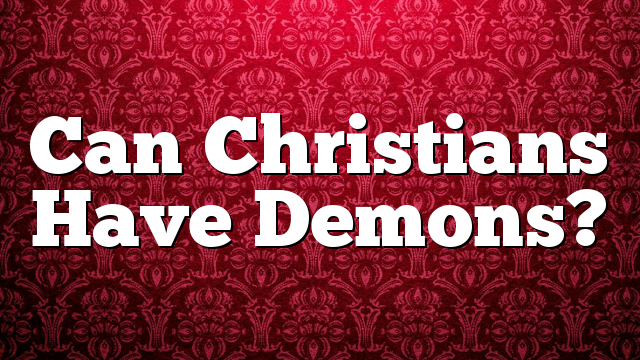 The subtitle of John Eckhardt’s article states, “Church people have been arguing for years over the issue of deliverance. I think that it is time to stop arguing and start setting people free.” He then relates how his church used to teach that Christians could not be possessed by a demon since, “Jesus and the Holy Spirit could not live inside the same body in which demons reside” (p. 66). That all changed when they realized that their doctrine did not square with their experience:

The problem was, our experience did not match our theology. When we ministered deliverance, we frequently prayed for people we knew were born-again, Spirit-filled believers—and they manifested demons! We had face the fact that either our experience was wrong or our doctrine was wrong.

We couldn’t question our experience because we knew what we were seeing. So we began to question our theology (p. 66).

Eckhardt then explains that, “Jesus tells us to cast devils out, not to cast devils off” (p. 66) and that demons promote the teaching that Christians cannot have a demon because, “they gain strength from staying hidden” (p. 67). He goes on to explain that deliverance from demon possession is a “covenant right” for believers, and should be performed on every new convert. Near the close of his article Eckhardt concludes, “We don’t question if the new believer has a demon, only how many he has” (p. 68).

This is rather remarkable when you consider some of the claims made in his article. He states as a matter of fact that, “For every sin in the Bible there is a corresponding demon” (p. 68) without any qualifications. He claims the following concerning generational sin:While I agree that squabbling over doctrine should not lead to the ruin of those in need, this is a topic that must be engaged. I am encouraged thatCharisma is having this discussion, but I fear that the quality of the dialogue must be raised or it will only muddy the waters further. Eckhardt admittedly leans heavily on experience, even going so far as to say that their experiences were beyond question. Yet, he does not deal seriously with scripture. Most of his references are from the Gospels where Jesus is clearly dealing with the unsaved. No text relating specifically to the topic of Christians and demon possession is quoted. This is troubling, because if his teaching is biblical then we should expect it to be supported by Acts and the writings of Paul. Unfortunately for this discussion, Eckhardt never attempts to locate his beliefs on possession within the early church.

If we can be subjected to the conse­quences of sin to the fourth generation, as Exodus 20:5 says, and a biblical generation is 40 years, then we are subject to the demonic influence of what people in our family lines were doing 160 years before us. This means that, taking the year 2000 as a starting point, we are affected by what those in our bloodlines were doing as far back as the year 1840.

Think about it. Even if a person has a great genealogy, he can’t know everything his ancestors were doing in secret that long ago. And if, in addition to genera­tional sin, he has committed personal sin or has been traumatized or victimized in any way, by the time he comes to the Lord, he is going to need deliverance on some level. There is just too much defilement and contamination on Earth to escape it (p. 68).

Certainly the above could lead to further bondage such as paranoia and superstition, divorced as it is from New Testament teaching. In the end, I felt that Eckhardt put too much emphasis on experience and too little on scriptural backing. Eckhardt bases his teaching narrowly. If it is biblical, then not just the Gospels, but Acts and the Epistles will support it. Without even an attempt to locate his teaching broadly on scripture, Eckhardt has failed to advance this important discussion.

I’ve been looking for the Full Gospel Business Men’s publications about denominational churches and the baptism in the Holy Spirit. Does anyone have any…