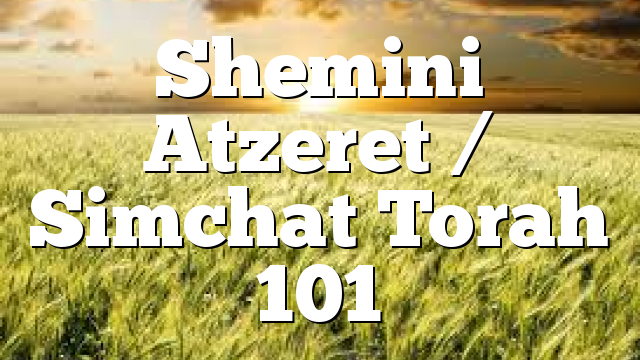 Coming at the conclusion of Sukkot are the two holidays of Shemini Atzeret and Simchat  . In Israel and among liberal Jews they are combined into one holiday on the day after the conclusion of  . Among more traditional Jews outside of Israel, they are observed separately from one another on two consecutive days. Shemini Atzeret means the “Eighth Day of Assembly,” while Simchat Torah means “Rejoicing in Torah.”

Shemini Atzeret is mentioned in the Bible, but its exact function is unclear. In Second Temple times, it appears to have been a day devoted to the ritual cleansing of the altar in the Temple. With the destruction of the Temple in 70 CE, this function of the day became obsolete. Although it marks the beginning of the rainy season in Israel and, therefore includes the year’s first prayer for rain, its lack of clear definition may have provided the impetus to celebrate it in conjunction with Simchat Torah, a celebration of the conclusion of one and the beginning of another annual cycle of readings from the Torah. This latter holiday probably originated during the medieval period.

Shemini Atzeret/Simchat Torah in the Community

Beginning on Shemini Atzeret and lasting until Pesach (Passover), a short prayer for rain is inserted into the second blessing of the Amidah Prayer. It is traditional to include the Yizkor, or memorial service, as part of the liturgy for this day. Simchat Torah is characterized by joyful dancing with the Torah. The final portion of the Book of Deuteronomy is read in the synagogue followed by the beginning of the Book of Genesis. In this manner, the  annual cycle of Torah readings continues unbroken.

While Shemini Atzeret’s significance is somewhat unclear, Simchat Torah conveys a clear message about the centrality of Torah in Jewish life. It is both a source of Jewish identity and a precious gift from God. Simchat Torah is the day on which the whole community gathers to come into direct contact with the Torah and to express our joy in having received it.

Is the Church of God a landmark or a restoration movement?

Is the Church of God a landmark or a restoration church? R. G. Spurling disagreed with Landmarkism, an ecclesiology which held that only churches…