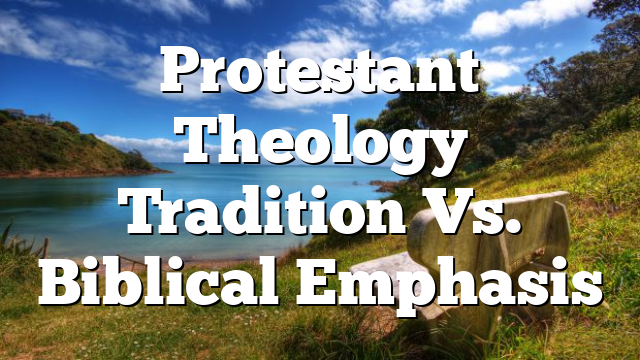 154 book reviews Jon Mark Ruthven What’s Wrong with Protestant Theology: Tradition vs. Biblical Emphasis(Tulsa, ok: Word and Spirit Press, 2013). 303 pp. $24.41 paperback. Jon Mark Ruthven admonishes Protestant Christians to refocus their attention from traditional emphasis on sola scriptura to a renewed emphasis on Scrip- ture’s pneumatological mandate: the Pentecost event in Acts 2 that fulfills Jesus’ promise to send the Spirit in John 16:12. The reception and experience of the Spirit by Christians is the mark of the “New Covenant Spirit” that is one of the central themes of Jesus’ message in the New Testament: the Spirit continues Jesus’ ministry to the faithful. Ruthven’s book is a public manifesto to Protestant Christians. It is a popular work that is borne out of his earlier work authored for a more specialized, schol- arly audience, On the Cessation of the Charismata: The Protestant Polemic on Postbiblical Miracles (Sheffield Academic Press, 1993; republished in a revised and expanded edition by Word and Spirit Press, 2011). The plan of the book is smart. It begins with a succinct opening summary of Ruthven’s case, and from there is structured into five parts, each part of which is made up of the book’s chapter divisions. An Epilogue summarizes the book. Part i (chapter 1) deals with the reception of Protestant theology and in- cludes an introduction. Part ii (chapters 2–5) contrasts the Spirit as the empha- sis of Scripture with Protestantism’s emphasis on a theology of preparation. Partiii(chapters6–10),theshowcaseofRuthven’sargument,dealswiththemes of Scripture versus the themes of Protestant traditions. Part iv (chapter 11) shows that Jesus’ mission on earth was bound up with the New Covenant Spirit, a covenant that was to continue by the sending of the Spirit once Jesus departed. Part v (chapters 12–14) shows where and how Protestant theology has missed the biblical emphasis on the New Covenant Spirit: it has miscon- strued the proper role of discipleship in its theology, a role that is facilitated by the presence of the Spirit. By misconstruing discipleship, God’s Voice is not heard through the Spirit, and Protestants miss out on hearing God’s Voice anew. Ruthven’s work is both eye-opening and, potentially, offensive to those who feel duty-bound to Scripture as God’s only revelation to humanity. Yet, Ruthven does not make a call to do away with Scripture at the expense of gaining expe- riences of the New Covenant Spirit. Instead, his aim is to show that Scripture itself emphasizes the Spirit’s role in the lives of Christians; a role that, at one time, was central to the lives of Christians. Ruthven argues that the Scriptural mandate stresses a messianic epistemol- ogy “based on immediate revelation by the Holy Spirit” (2). In contrast, the © koninklijke brill nv, leiden, 2015 | doi: 10.1163/15700747-03602029 ========1========book reviews 155 Reformation defended sola scriptura by “denying any ‘miracles’ or revelatory spiritual gifts which might be used to accredit or form new doctrine” (3). This denial was partly in reaction to the Catholic Church’s long tradition of basing its authority on miracles, and so Protestants wanted no measure of claims to miracles and revelation. The rationale was that the claim to miracles was the very thing that the Catholic hierarchy used as a basis for its authority, an author- ity that Protestants were challenging. So, if claim to miracles equaled Catholic authoritative corruption, then claims to miracles must be denied to avoid any future potential abuse of power. Ruthven uses this historical reconstruction to set the agenda of his book: “Protestants took a wrong turn in that the scriptural authority they sought to defend emphasized the very miracles and especially the immediate, ongoing revelatory voice of God that they denied (the point of John 5:43–47)” (3). With this statement, Ruthven summarizes “what’s wrong with Protestant theology.” AccordingtoRuthven,Protestanttheologylaysstressonsalvationbyempha- sizing repentance and baptism, or what he calls “a theology of preparation.” But this preparation is only a good starting point from which believers are to reach their goal; a path, however, beyond which Protestant theology does not travel. Therefore Protestant theology misses the goal of “intimacy and relationship with God” because it denies the process through which to achieve that goal. That process involves the believer’s reception of the Spirit. The Spirit reveals God’s will by imparting wisdom and instruction to the followers of Christ, and by this salvation is achieved. Ruthven lays out a method that follows contemporary content-analysis methods in order to make a case for his position: Scripture emphasizes pro- phetic experience in the lives of believers. This method results in showing a consistent theme running throughout the Old Testament: the word of power, a creative word, and a prophetic word of God. In the New Testament, the word and power is expressed in terms of the New Covenant Spirit which was the upshot of Jesus’ mission: the bestowal of the Spirit on believers. Ruthven concludes his work that the Bible is an instruction manual for dis- cipleship. The New Testament shows how believers come to receive the Spirit in the context of discipleship, yet much of Protestant theological formation deals with instruction in theology and ethics at the expense of instruction in Spirit-led discipleship. Ruthven argues that Protestant theology takes a wrong turn whenever it misses or denies the practice of spiritual charismata in the church today, for these charismata are the foundations of discipleship: Disci- ples of Christ are those who receive the Spirit that he promised to send to them from Heaven. Protestants therefore have “messed up” discipleship by paying no attention to manifestations of the Spirit in the church today. PNEUMA 37 (2015) 111–171 ========2========156 book reviews I recommend Ruthven’s book to those interested in the cessationist debate (e.g. Benjamin Warfield) and to those who are interested in a well-sustained argument for the Spirit alive in the churches today. This should appeal to both Protestant Charismatics and Catholic Charismatics. The only minus is that the book lacks indices and a bibliography. Clint Tibbs Assistant Professor of Philosophy, Delta State University, Cleveland, Mississippi [email protected] PNEUMA 37 (2015) 111–171 ========3========

THE LORD HAS SPOKEN

“…the glory of the LORD will be revealed, and ALL PEOPLE WILL SEE IT TOGETHER. For the mouth of the LORD has spoken.” (Isa….