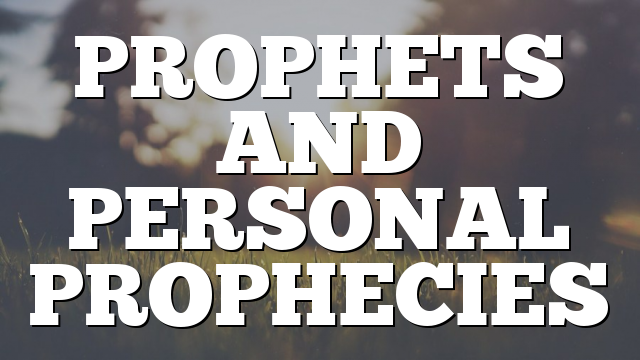 The Assemblies of God believes wholeheartedly in the contemporary prophetic ministry. We have some reservations, however, about current emphases that seem to go beyond the biblical description and guidelines for prophets and prophecies.

The Bible characterizes the prophet as a spokesperson for God. One meaning of the Hebrew word nabi, translated prophet, is “one called to speak.” Peter tells us that such speaking was prompted, empowered, and guided by the Holy Spirit (2 Peter 1:20,21).

A survey of the Old Testament shows that prophets were “servants” of God, calling His people to covenant faithfulness through obedience to the Law and to repentance in the event of sinning (cf., Isaiah 58:6-9; Ezekiel 18; Micah 6:6-8; Hosea 6:6; Amos 2:4; 5:21-24). The messages of Old Testament prophets were more often “forth-telling” rather than “foretelling.” Of course, Old Testament prophets sometimes saw and predicted the future (e.g., 1 Samuel 3:11-14), but the predictive prophecy was focused on God’s will and plan for His covenant people. Consequently, pre-Pentecost prophets were primarily select spokespersons calling God’s people to obedience by appealing to Israel’s past and future (i.e., God’s past blessing and His future judgment of disobedience).

After the Day of Pentecost, the prophet function could be fulfilled by any Spirit-filled believer God might choose. From one worship service to the next, a variety of believers could be channels for the gift of prophecy. The purpose of the New Testament gift of prophecy, like all of the gifts of the Spirit, was to edify and build up the body of Christ through encouragement, consolation, and correction. Peter tells us, “Each one should use whatever gift he has received [including spiritual gifts] to serve others, faithfully administering God’s grace in its various forms” (1 Peter 4:10).

The experience of the Corinthian church gives evidence that abuse and misuse can creep into the operation of the gifts of the Spirit if the vessel is not wholly submissive to the guidance and control of the Holy Spirit. That is why Paul said the message of the prophet spoken in the New Testament church should be judged by all who were hearing the message. The judging most likely was to ask how the prophecy conformed to the whole of Scripture. This was a change from the function of the Old Testament prophet. There is no indication that the message of the Old Testament prophet was to be judged. However, if the prophecy did not come to pass, or urged the people to follow other gods, the prophet was declared a false prophet and killed.

The Assemblies of God believes the four gifts (apostles, prophets, evangelists, and pastors/teachers) were given to the Church, and that none of the gifts has been eliminated. Yet, we do not believe it is necessary to use the titles of apostles and prophets in order for those functions to be active in the world and the church today. Of course, just naming a person an evangelist, pastor, or teacher also does not say that God has made such a call and appointment of a particular person. A person’s ministry confirms which of the leadership gifts one may or may not possess in serving the church.

Prophets in the New Testament are never described as holding a recognized office or position as in the case of pastors and evangelists. They spoke prophetically to the Body for edification and admonition. When they prophesied under the inspiration of the Spirit, their ministry was noted, but they were not ordained to hold a position, title, or office. They could indeed have been called prophets without designating them as filling an office. A self-proclaimed prophet who dropped into a local church setting would certainly have been suspect until he was better known. And to guard against such abuses, Paul taught that all prophetic utterances should be tested by the body (1 Cor. 14:29).

There is sometimes an unbiblical tendency to give final-word authority to the predictions and personal prophecies about what a person should do, whom he or she should marry, etc. A pastor, evangelist, or teacher may at times fulfill the ministry of the prophet, but never as the untested, unquestioned authoritative voice of God. Attempts to correct such abuses are often met with the accusation of quenching the Spirit or despising prophetic utterances (1 Thess. 5:19-20). But Paul, who warned against such restrictions on the moving of the Spirit, admonished in the next verse to test or examine everything and hold fast to what is good (vs. 21). Writing to the Corinthians Paul required that after a prophetic message “others should weigh carefully what is said” (1 Cor. 14:29). Paul’s advice will not quench the Spirit, but it should quench a spirit that might inadvertently hinder what the Holy Spirit desires to do.

Since the New Testament does not provide for establishing the prophet in a hierarchical governing structure of the church, the Assemblies of God disapproves of formally naming or declaring individuals as prophets in the church. Prophecy is a continuing gift of the Holy Spirit that is broadly distributed as the Spirit wills throughout Pentecostal churches. Paul spoke highly of the person who faithfully speaks the mind of the Spirit, “Follow the way of love and eagerly desire spiritual gifts, especially the gift of prophecy” (1 Cor. 14:1). We need the true prophetic word of the Spirit in our churches, but not human words purporting to be the voice of the Spirit.

The above statement is based upon our common understanding of scriptural teaching.

At Christmas time someone gave me the Quran

At Christmas time someone gave me a fresh copy of the Quran, this one has a long introduction by Maulana Khan an Islamic scholar…