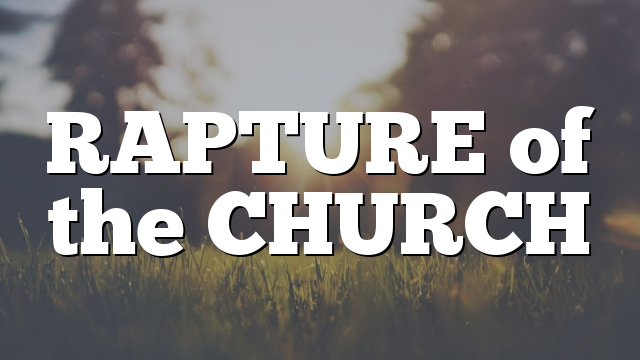 This statement is the report of the committee to study the rapture of the Church. The report was adopted by the Assemblies of God General Presbytery, August 14, 1979.

Under the section “The Blessed Hope” in the Statement of Fundamental Truths of the Assemblies of God, is the following statement:

“The resurrection of those who have fallen asleep in Christ and their translation together with those who are alive and remain unto the coming of the Lord is the imminent and blessed hope of the Church (1 Thessalonians 4:16, 17; Romans 8:23; Titus 2:13; 1 Corinthians 15:51,52).”

They understood that the present age will end with His coming (Matthew 24:3). The assurance of His return was one of the truths with which He comforted His followers before His death (John 14:2, 3).

At the time of Christ’s ascension two angels came to the group of watching disciples to repeat the promise that He will return. They declared it would be in the same manner as He went away (Acts 1:11). This clearly means His second coming will be literal, physical, and visible.

The New Testament Epistles refer often to the Second Coming, and the theme of imminence runs through all the passages of Scripture dealing with this subject. Though there would be a period of time between the first and second comings (Luke 19:11), the whole body of teaching concerning the return of the Lord emphasizes that it will happen suddenly without warning; that believers should be in a state of continual readiness(Philippians 4:5; Hebrews 10:37; James 5:8, 9; Revelation 22:10).

Believers in the early days of the Church lived in this state of expectancy (1 Corinthians 1:7; 1 Thessalonians 1:9, 10). Paul’s “we” in 1 Corinthians 15:51 and 1Thessalonians 4:17 shows that he maintained the hope he would be alive when Jesus comes back.

A comparison of passages of Scripture relating to the Second Coming shows that some speak of a visible event seen by all mankind and involving the judgment of sinners.Others describe a coming known only to believers and resulting in their deliverance from earth.

The latter is referred to among evangelicals as the Rapture. This word is not in the English Bible, but has been used so widely that one of the definitions of “rapture” in Webster’s Third New International Dictionary Unabridged is: “Christ’s raising up of His true church and its members to a realm above the earth where the whole company will enjoy celestial bliss with its Lord.” The word raptured could well be used to translate the expression “caught up” of 1 Thessalonians 4:17. Jesus said His coming will result in one individual being taken from a location while another is left. This indicates a sudden removal of believers from the earth with unbelievers left to face tribulation (Matthew 24:36-42).

In 1 Thessalonians 4:13-18, he considered a different aspect of the Second Coming. This brief passage is the most direct and clear teaching on the Rapture in the New Testament. It speaks only of believers, living and dead. Nothing is said about the wicked seeing Christ at this time. Paul described Jesus as coming in the air, but nothing is said about His feet touching the earth, as we are told elsewhere they will at His return (Zechariah 14:4). It is the moment when 1 John 3:2 will be fulfilled, and we shall be like Him.

The same Greek word used in 1 Thessalonians 4:17 for “caught up” is used in Acts 8:39 to describe Philip’s being “caught away” after baptizing the Ethiopian. The latter verse states that the Spirit of the Lord caught Philip away—identifying the source of the power that will remove believers from earth at the Rapture.

In 2 Thessalonians 2:1 Paul called the Rapture “our gathering together unto him.” The Greek word for “gathering” is the same as the one used for “assembling” in Hebrews 10:25, referring to the assembling of Christians for worship. It is a picture of the saints congregating around Christ at His coming for them.

The supernatural removal of godly individuals from earth is not unknown in Scripture. The outstanding event in the life of Enoch was his miraculous disappearance from earth after years of walking with God (Genesis 5:21-24). The author of Hebrews called this experience a translation, bypassing death (Hebrews 11:5).

Although some aspects of Elijah’s translation differed from Enoch’s, it also involved the sudden removal of a believer from the world without experiencing death (2 Kings 2:1-13).

First Corinthians 15:51-54 deals with the same event as 1 Thessalonians 4:13-18. Here also Paul spoke of the changes that will take place in both living and dead believers at the Rapture. He called this a mystery (1 Corinthians 15:51), a truth previously unrevealed but made known to him by the Holy Spirit.

In Philippians 3:21 Paul connected the Lord’s coming to the time when “our vile body” will be changed—another reference to the Rapture.

Passages which pertain to the Rapture describe the coming of the Lord for His people. Passages which refer to the revelation of Christ describe the coming of the Lord with His saints. Colossians 3:4 speaks of believers appearing with Christ at His coming.Jude 14 also foresees the Lord’s return with His people to execute the judgment referred to in many other passages relating to His public appearing.

Since Scripture does not contradict itself, it seems reasonable to conclude that the passages describing Christ’s coming for the saints and with the saints indicate two phases of His coming. We believe it is scripturally correct to assume that the intervening period between the two is the time when the world will experience the Great Tribulation,involving the reign of Antichrist and the outpouring of God’s wrath on the wicked (Daniel 12:1, 2, 10-13; Matthew 24:15-31; 2 Thessalonians 2:1-12).

Although God’s people may endure severe trials before the Lord comes, the Church will be raptured before the period called the Great Tribulation.

In 2 Thessalonians 2 Paul indicated certain things must take place before the Day of the Lord (of which the Great Tribulation is a part) can begin. An individual called the man of sin (Antichrist) will appear. The mystery of iniquity has been at work since Paul’s time but is being restrained by the power of the Spirit working through the true Church. Only when the Church is removed from earth by the Rapture can this man come forward publicly.

In 1 Thessalonians 5, following the passage on the Rapture in chapter 4, Paul taught about the Day of the Lord. He warned of the destruction it will bring to the wicked(vv. 2, 3). He was quick to assure Christians that those who abide in Christ will not be overtaken by it (v. 4).

Christians are told repeatedly in the New Testament to be watchful for the Lord’s appearing. Never are they taught to watch for the Great Tribulation or the appearance of Antichrist. To expect that such things must happen before the Rapture destroys the teaching of imminence with which the New Testament is replete.

It is consistent with God’s dealings with His people in the Old Testament to believe that the Church will be removed from the world before the Great Tribulation. God did not send the Flood until Noah and his family were safe in the ark. He did not destroy Sodom until Lot was taken out.

The weight of Scripture supports a pre-Tribulation Rapture. Wherever teaching about the Second Coming occurs in the New Testament, imminence is underscored. To interpose other events before the Rapture does violence to such teaching.

While Christians are looking forward to the coming of the Lord, it is well to remind themselves of Paul’s words to Titus: “For the grace of God that bringeth salvation hath appeared to all men, teaching us that, denying ungodliness and worldly lusts, we should live soberly, righteously, and godly, in this present world; looking for that blessed hope, and the glorious appearing of the great God and our saviour Jesus Christ; who gave himself for us, that he might redeem us from all iniquity, and purify unto himself a peculiar people, zealous of good works” (Titus 2:11-14).

In a period of less than 10 minutes on Monday, I read an article about candidate Joe Biden’s extreme pro-abortion views and then was sent a…