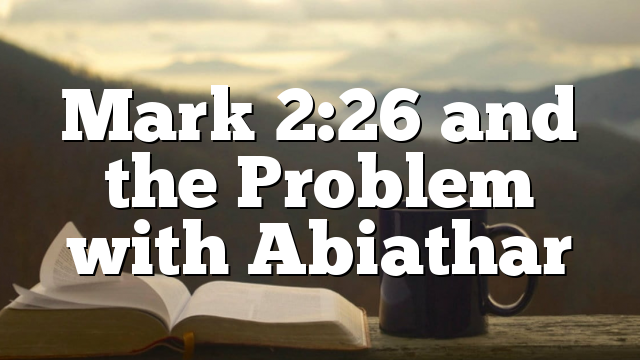 To Matt. 11:29 cf. Gospel according to the Hebrews (in Clement of Alexandria, Miscellanies I.O.Jo, 5) —
He who wonders shall reign: and he who reigns shall rest.

MARK 2:26—WAS JESUS WRONG WHEN HE MENTIONED ABIATHAR AS HIGH PRIEST INSTEAD OF AHIMELECH?

PROBLEM: Jesus says that at the time David ate the consecrated bread, Abiathar was high priest. Yet 1 Samuel 21:1–6 mentions that the high priest at that time was Ahimelech.

In almost all of the suggested commentaries the introduction contained information about the authorship, date, and structure of the Gospel of Mark. In the next few paragraphs, I will present the combined information on these subjects incorporated through my opinionated selection.

The Jerome Bible Commentary states that the Gospel of Mark was written in AD 64, immediately after the death of Apostle Peter (22). Lane agrees with a date between AD 60-70, but definitely before the destruction of Jerusalem (21). The same time pointer is used by Anderson in his conclusion that Mark was written approximately AD 65-70 (26).

Lane writes that the Gospel is anonymous, but traditionally linked to Mark (21). The Jerome Bible Commentary identifies the author as John Mark from Acts 12:12, 25 and Mark from 1 Pt. 5:13 (21).

The Interpreters Bible points out that the author is obviously not an expert of Judaism, and does not recognize the importance of the accurate description of the historical situation. For example, he calls Herod a king, while Herod is only a governor under the Roman rule (IB 637).

This characteristic of Mark’s account incorporates both his audience and his intent of writing. Anderson’s opinion is that Mark wrote to the Gentiles in the Roman Empire (29). On the other hand, The New Interpreter’s Bible reaches consensus that both Syro-Palestinian and other ethnic groups of immigrants, forming minority communities in the Roman Empire, were among Mark’s audience (515).

Mark is also the earliest attempt to reduce the apostolic tradition to a written form. This makes his account the source for any further Gospel writing (Lane 1-4). Mercer Commentary of the Bible goes even further to suggest, that “before Mark there was no genre of literature known as Gospel” (975). To describe the life situation of the writing of the Gospel account, Anderson points out that Mark’s attempt to promote Christianity was done in a time when martyrdom had been a reality (25).

Mercer Commentary of the Bible defines The Gospel of Mark as “a popular ancient biography, written from the presumption of the apocalyptic worldview” (975-76). At the same time, Schweitzer writes that the account is lacking biographical information. Anderson also agrees that Mark’s purpose was to present the person of Jesus, and not a biography or history (3).

Because of his traditional association with the apostle Peter (1 Pt. 5:13), it is suggested that the purpose of Mark was to present Peter’s preaching in written form. Lane presents an interesting comparison between the structure of the Gospel of Mark by chapters and the account of Peter’s sermon in Acts 10:36-41 (7-11).

The Jerome Bible Commentary points out that the structure of Mark can be divided both according to Geographical and Theological characteristics. The Geographical division is determined according to the travels of Jesus. On the other side, the Theological frame has two major divisions: the Ministry of Messiah and the Ministry of the Son of Man (JBC 22).

The Greek text of Mark has not been altered greatly during the time of transmission (IB 645). While Anderson disagrees with the existence of Q, Schweitzer believes that Mark has used the Q-document as a source for his Gospel account (Anderson 4). Mark is the first Gospel because its structure has been closely followed by both Matthew and Luke (Anderson 2, 4). In the Gospel of Matthew, chapters three and four, Matthew follows the Markan narrative, but also attaches additional information from Q. Evidence for this is the obvious contrast between the length of the Gospel accounts (Schweitzer 11).

Finally, the structure of Mark is compressed, but not chronological (Anderson 32, 34). The ending of the Gospel has been suggested to include its short and long version, excluding and including the passage of Mk. 16: 9-20. In both of the cases, it differentiates form the Markan style of writing and was probably edited later in the second century (IB 645).

IMPORTANCE OF OUR BEING HOPEFUL