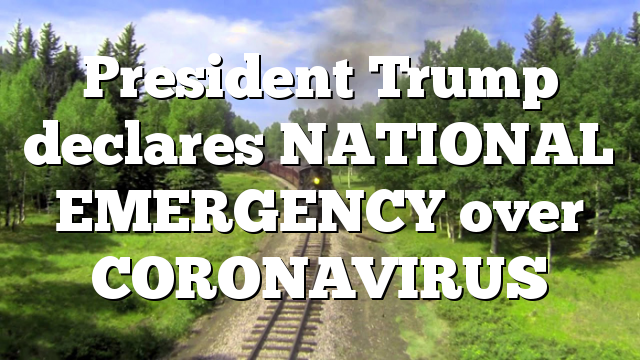 “I am officially declaring a national emergency,” the president said during a news conference in the Rose Garden. “No resources will be spared, nothing whatsoever.”

The announcement came an hour after House Speaker Nancy Pelosi partially preempted Trump by making a public statement from the Capitol, outlining legislation she has negotiated largely with Treasury Secretary Steven T. Mnuchin that, she said, would ensure that coronavirus testing is free for all Americans, including the uninsured.

“We can only defeat this outbreak if we have an accurate determination of its scale and scope,” said Pelosi.

Like former Vice President Joe Biden a day earlier, she delivered remarks standing in front of a row of American flags — a symbolic gesture by Democrats suggesting an eagerness to grasp the trappings of the presidency at a moment when Trump’s leadership is under intense scrutiny.

House Democrats vowed to vote Friday on their legislation or an amended version agreed to by the White House, which has balked at some of the elements that go beyond providing temporary relief to those affected by the coronavirus.

If the House pushes ahead without clear support from the administration, any bill coming out of the House would face more serious hurdles in the Republican-controlled Senate, which is expected to take up the legislation next week.

According to administration officials, the final determination on whether to declare a national emergency or a national disaster, which is typically invoked following natural disasters like hurricanes but offers Trump more discretion over how money is spent, had remained unsettled just hours before the planned event. Aides huddled inside the White House to decide on the administration’s course of action.

Trump also spoke Friday with French President Emmanuel Macron, who tweeted that the Group of 7 leaders had agreed to take part in a video conference Monday to better coordinate efforts to slow the global pandemic and mitigate its sweeping economic fallout.

The planned news conference came less than 48 hours after the president gave an Oval Office address Wednesday evening, in which he made several factual errors, despite reading from a teleprompter, and delivered so unsteady and halfhearted-seeming a performance as to trigger a massive market sell-off.

Prices rebounded Friday ahead of Trump’s speech, with the Dow Jones industrial average gaining 3.5% in afternoon trading, which came after the average plunged 10% on Thursday — its steepest drop since the market’s 1987 crash.

Other major stock indexes dived nearly as much Thursday despite efforts by the Trump administration and the Federal Reserve to calm skittish investors, sending the market into so-called bear territory, or 20% or more below the record highs the market reached only last month.

That ended the 11-year bull market in stocks, the longest ever, that began during the financial crisis in 2009.

Despite Friday’s upswing, the Dow was on track to post a loss of nearly 15% for the week, during which the selloff became so intense that trading had to be halted for 15 minutes on two separate days under regulatory “circuit breakers” aimed at preventing an overwhelming cascade of sell orders.

In the Oval Office on Thursday, Trump declared himself an expert on the Stafford Act.

“We have very strong emergency powers under the Stafford Act,” Trump told reporters. “I have it memorized, practically, as to the powers in that act. And if I need to do something, I’ll do it. I have the right to do a lot of things that people don’t even know about.”

Trump’s overall nonchalance about the coronavirus pandemic so far has stood in increasingly stark contrast to state and municipal leaders, as well as private sector executives who have in recent days taken action on their own to shut down school districts, close offices, museums and other businesses and cancel major events, including the NCAA March Madness tournament.

IMPRESS THEM UPON YOUR CHILDREN

[Timothy lets us know that “The goal of this command is love, which comes from a PURE HEART AND A GOOD CONSCIENCE AND A…