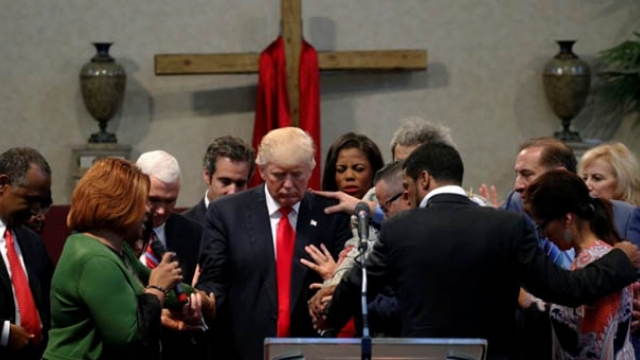 Donald Trump is campaigning at a Florida church today. Is that allowed?

Federal law says probably not, but it’s unlikely the IRS will enforce it, experts said.

President Donald Trump will bring his campaign to an Apostolic megachurch in the Miami suburbs today for a rally widely seen as a response to calls for his removal for office from some in the Christian community.

A basic question about the event begs exploration: Is this even legal?

How, then, can King Jesus International Ministry in Kendall host Trump’s campaign?

The answer, most likely, is it can’t, legal experts agreed. But they also said there’s little that will be done about it.

“There’s not very much enforcement by the IRS on this,” said Ellen Aprill, a professor of nonprofit law at Loyola University Marymount. “So a lot of compliance is voluntary.”

Throughout the history of American politics, candidates have often spent time in church pews as part of their campaign to win over religious voters. Democratic contenders for president have visited mosques in Iowa and New Hampshire and black churches in South Carolina in their race for the party’s nomination.

But rarely, if ever, has a president held a rally at a house of worship like the one Trump has scheduled for today. In King Jesus International Ministry’s 7,000-seat auditorium, Trump will launch Evangelicals for Trump and he’s expected to make a full-throated pitch for the country’s religious right to coalesce behind his campaign.

The event was announced a week after Christianity Today, a leading evangelical magazine, published an editorial calling for Trump’s impeachment.

Maggie Garrett, the vice president of public policy at Americans United for Separation of Church and State, said she couldn’t recall any previous candidate for president holding a comparable political event. Rather, it’s the latest instance of Trump flouting political norms and sprinting past a line that candidates traditionally run up to or sometimes stick a toe over.

Dual-covenant patterns of the future of the JEWS