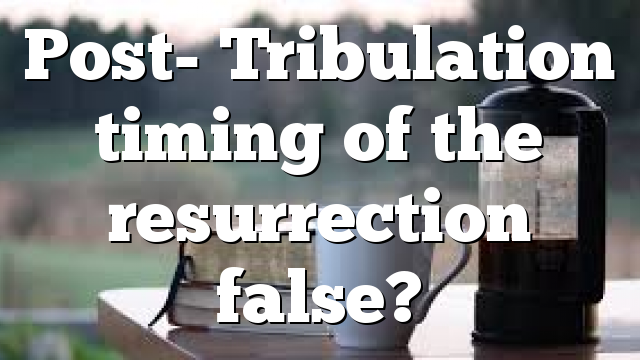 **Why is a Post-Tribulation timing of the resurrection false?**

*‘And to wait for His Son from heaven, whom He raised from the dead, evenJesus who delivers us from the wrath to come.’ 1 Thessalonians 1:10*

Supporters of a post-tribulation timing of His coming teach ‘after the ‘tribulation of those days’ represents the 70th week of Daniel. They insist the Son of Man will come back for His elect only after this seven-year period ends. This is ironic because it was the pre-tribulation teachers that invented this misleading label. In scripture, the 70th week of Daniel is never called the tribulation period, the great tribulation, nor the day of the Lord. But won’t those believing in a post-tribulation resurrection be prepared to get the victory over the Beast? I’ve heard this dangerous reasoning from so many. Why should we settle for another false interpretation? Clearly, His coming will be like the days of Noah. (Luke 17:26-30) Our Jesus exhorts us to look up for our redemption before His wrath is poured out on the wicked. (Luke 21:28, 1 Thes. 1:10) Post Tribbers are teaching the exact opposite. They are actually preparing believers to experience the wrath of the Lamb. (Rev. 6:17; 15:1; 16:17)

I emphasize again, nowhere in scripture is there a pre, mid, or post-tribulation timing of the resurrection.

You Can Pray To Be Released From A Curse