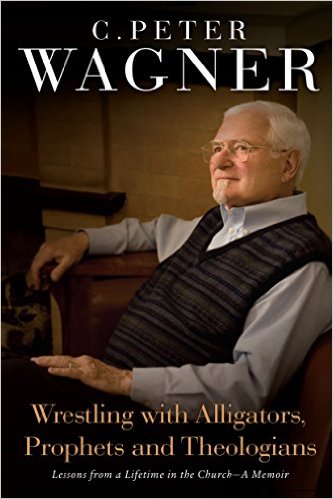 Peter Wagner, a pioneer in the apostolic ministry, has gone home to be with the Lord. He was 86 years old, passing away at 2:30 p.m. Friday. Wagner suffered from congestive heart failure in part of his heart. In June, he underwent two surgeries. The first was to drain his abdominal cavity of excess fluid. This second surgery is to repair the lungs and pour talcum powder into the lungs, which repairs the leaky lungs. Wagner’s friend, apostle Chuck Pierce, confirmed Wagner’s death on his Facebook page Friday, calling Wagner “one of the greatest molders of modern church history.”

C. Peter Wagner is president of Global Harvest Ministries (globalharvest.org), chancellor of Wagner Leadership Institute and presiding apostle of the International Coalition of Apostles. He has written numerous books, including Dominion! (Chosen).

Who is Peter Wagner?
For those of you who don’t know who he was, I first knew him as a professor at the School of World Missions at Fuller Seminary. His Wikipedia article has more. I remember when I first met him. He was lecturing at the Billy Graham School at the Southern Baptist Theological Seminary. If I recall correctly, he said that Thom Rainer and the Billy Graham School now had the “mantle” of the Church Growth Movement. (Peter was a key leader, if not THE key leader, in the Church Growth Movement before he moved on to other emphases.) We started corresponding after that meeting. He once sent me a long email, walking through a book I wrote few years before his email, and being so encouraging. He contrasted my thoughts with his own (and others), always encouraging, and making me think. And it came out of the blue on a book I published many years earlier.

Other ministry leaders on C. Peter Wagner’s life and ministry:

Bishop Joseph Mattera: “Dr Wagner pushed my first book ‘Ruling in the gates’ — all over the world! He promoted whoever and whatever he thought was cutting edge! He paved the way for me and many others in the apostolic movement  His voice will be sorely missed!”

Bishop Mark Chironna, Church on the Living Edge: “Our thoughts and prayers are with Doris Wagner and her entire family as they mourn the loss of one of the great apostolic voices to our generation, Peter Wagner. Your reward is great! You will be missed.”

Doug Stringer, founder, Somebody Cares International: Both Carol (Garlow, the wife of Jim Garlow) and Peter have ministered to us all and have left a lasting legacy. Both left an indelible mark in my life personally.”

Bob Weiner, president, Weiner Ministries International: “Our hearts go out to Doris and family as well as the entire body of Christ who loved him. We honor Peter as one of the greatest reformers of our time who has literally changed the world! Peter is a true general and father to so many of us! My heart breaks knowing my great friend has passed from this life but know Heaven is standing with great joy to receive Him!”

C. Peter Wagner explains why our focus should be on advancing, not escaping.

I can still remember prophecy teachers who tacked rows of charts and diagrams on the church wall and explained spell-binding details of the past, present and future. I cut my spiritual teeth on the Scofield Bible and devoured Hal Lindsey’s The Late Great Planet Earth. My seminary professors instructed me in pre-tribulationism and premillenialism. I quickly categorized anyone who disagreed as a “liberal.”

Now I look back on those days with a strange combination of regret and amusement. How is it that I was so wrong for so long? As I analyze my change, I can sum it up by admitting that I simply did not understand the kingdom of God.

Let me explain what I mean by starting with the Great Commission. The Great Commission has been central to my life. I committed myself to missions the night I was saved when I was 19. I spent my first 16 years of ministry as a field missionary and the next 30 as a professor of missions.

My heart’s desire was to help fulfill Jesus’ mandate to “make disciples of all nations.” However, the time came when I had to make a radical shift in the way I interpreted those words of Jesus.

Formerly, I thought my task was to go to as many nations of the world as possible and save as many souls as possible and plant as many churches as possible. Now I take the Great Commission more literally when it tells us not to make as many individual disciples as we can but to disciple whole social groups—such as entire nations. This is kingdom theology.

When God created Adam and Eve, He told them to take dominion over all His creation (see Gen. 1:28). This was God’s plan until Satan succeeded in persuading Adam to obey him rather than God. The result was that Satan usurped Adam’s authority and took dominion himself.

But Jesus came as the second Adam. He brought the kingdom of God to earth and sent His disciples out to preach the gospel of the kingdom. He has now commissioned us, by the power of the Holy Spirit, to advance His kingdom, to push Satan’s kingdom back and to retake the dominion that rightly belongs to the human race.

This is the Great Commission. It still includes healing the sick, casting out demons, saving souls, multiplying churches and feeding the hungry, but it goes far beyond these activities. It is putting feet to the prayer that Jesus taught us to pray:“Your kingdom come, Your will be done on earth as it is in heaven.”

How has this played out? The human race is enormously better off now than it was when Jesus died and was raised from the dead 2,000 years ago! Satan is losing ground more and more rapidly.

Those who think the world is getting worse and worse are missing the big picture of human history. I now regard my former pre-tribulationism and premillenialism as escapist eschatology.

I do not plan to give any territory back to Satan or his Antichrist.Yes, there will be setbacks, but the advances will far outnumber them. Instead of an escapist eschatology, I expouse a victorious eschatology!

My favorite term is “dominion eschatology.” Why? Because Jesus did not give His Great Commission in vain.

The battle will be ferocious, and we will suffer some casualties along the way.However, we will continue to push Satan back and disciple whole nations.

We are aggressively retaking dominion, and the rate at which this is happening will soon become exponential. The day will come when “‘The kingdoms of this world have become the kingdoms of our Lord and of His Christ, and He shall reign forever and ever’” (Rev. 11:15, NKJV)!

What were the “Urim and Thummim” (KJV)?

The first mention of these two objects occurs in Exo. 28:30, in which it is written,

30 And thou shalt put in the breastplate of judgment the Urim and the Thummim; and they shall be upon Aaron’s heart, when he goeth in before the LORD: and Aaron shall bear the judgment of the children of Israel upon his heart before the LORD continually. KJV, 1769