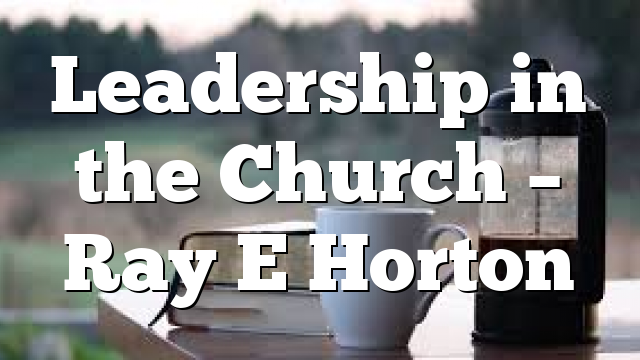 Today, much of the terminology for church leadership comes out of tradition rather than Biblical example. Most frequently, the head minister is called pastor. If he truly is a pastor, that is good, for then he’ll be sensitive to the people. Yet, that is a clearly functional role of caring for the people, rather than an administrative function. If a minister called to be an evangelist, prophet or teacher, without the pastoral gift, is in charge, it can be hurtful.

If the head elder has administrative but not pastoral and other five-fold calling (apostles, prophets, evangelists, pastors and teachers), he needs people serving with him who do have the pastoral call, as he or she grows in these areas. These helpers would be ministers not necessarily with the titles but with the various five-fold skills.

In the New Testament church portrayed in the book of Acts, people in leadership were known as elders, whether or not they were called out into full-time ministry. The Greek word “presbuteroi,” translated elders, is used to speak of both older men in general, and the leaders of both Israel and the church.

I do like the term elder best, from a scriptural perspective. Elders lead the church, while various five-fold people minister there or are sent out. Leadership may be with a head elder, or an eldership team. I do believe that elders called by the Lord to lead a church are to develop in all of the five-fold ministries so that they will be spiritually equipped to equip the congregation to serve, developing maturity and unity in the people, and to help them find their calling, so that working together, the church will grow both spiritually and numerically as the lost are reached with the Gospel. We see the process described in Ephesians:

“And He Himself gave some to be apostles, some prophets, some evangelists, and some pastors and teachers, for the equipping of the saints (Born Again believers) for the work of ministry, for the edifying of the body of Christ … that we should no longer be children, tossed to and fro and carried about with every wind of doctrine … but, speaking the truth in love, may grow up in all things into Him who is the head—Christ — from whom the whole body, joined and knit together by what every joint supplies, according to the effective working by which every part does its share, causes growth of the body for the edifying of itself in love” (Eph. 4:11-16).

In saying that elders are the people in charge of the direction of the church, I believe the scriptures below clearly indicate that elders are spiritual elders appointed/ordained and set apart by the Holy Spirit for that purpose, and not a committee of business people with leadership experience, or people who have been a part of the church for a long time. Some churches have that type of leadership, but Holy Spirit rarely can have His way in such an environment.

A true leader is someone that the people will follow

In fact, the very idea that a spiritual leader is one who has natural abilities to run things is wrong. A true leader is someone whom people will follow, and, in the church setting, that would be spirit-filled people like Jesus with godly wisdom, compassionate hearts, with mercy, who will be sensitive to them and to the Holy Spirit, and care for the congregation, not lording it over them. Jesus Himself said in Matt. 20:25-25: “You know that the rulers of the Gentiles lord it over them, and those who are great exercise authority over them. Yet it shall not be so among you; but whoever desires to become great among you, let him be your servant.”

Let’s look at some examples of the term elder concerning church leadership: Those in leadership in Jerusalem were known as elders. “Then the disciples, each according to his ability, determined to send relief to the brethren dwelling in Judea. This they also did, and sent it to the ELDERS by the hands of Barnabas and Saul” (Acts 11:29-30).

In Acts 14, Paul and Barnabas appointed elders in Lista, Inconium and Antioch. “So when they had appointed ELDERS in every church, and prayed with fasting, they commended them to the Lord in whom they had believed” (Acts 14:23). This was important to them – notice they prayed with fasting.

When Judaizers came to Antioch, trying to impose their ways, “it was determined that Paul and Barnabas and certain others of them should go up to Jerusalem, to the apostles and ELDERS, about this question” (Acts 15:2). Apostles and ELDERS are referred to in vs. 4, 6, 22, 23 and 16:4 as well. In Acts 20:17, “From Miletus he sent to Ephesus and called for the ELDERS of the church.”

“Do not neglect the gift that is in you, which was given to you by prophecy with the laying on of the hands of the ELDERS” (1 Tim. 4:14), was Paul’s instruction to Timothy. Notice that these elders where full of the Spirit, prophesying and laying on hands.

“Let the elders who rule direct the affairs of the church well be counted worthy of double honor, especially those who labor in the word and doctrine preaching and teaching. For the Scripture says …The laborer is worthy of his wages” (1 Tim. 5:17-18). Notice that we shouldn’t begrudge true elders of their wages, but freely give to support their ministry, which is spending time in the Word and in prayer to know the mind of Christ for the church and prepare and deliver preaching and teaching. It is the equipped people of the congregation who do the other work of the ministry.

We see the appointing of elders in every church again in Titus 1:5: “For this reason I left you in Crete, that you should set in order the things that are lacking, and appoint ELDERS in every city as I commanded you.” In vs. 6 we have the qualifications of elders: “An ELDER must be blameless, faithful to his wife, a man whose children believe and are not open to the charge of being wild and disobedient.”

Then we have James, who also calls the leaders elders. James 5:14: “Is anyone among you sick Let him call for the elders of the church, and let them pray over him, anointing him with oil in the name of the Lord.”

I don’t want to make terminology seem overly important. Yet, words are meaningful. Immature or self-important people get puffed up with titles. But an elder doing the work of a pastor or prophet, etc., speaks more of service. On the other hand, the Holy Spirit calling must be recognized on all the brethren as they grow into the areas they are called to and equipped for so that every part does its share (Eph. 4:16). As each are released into and recognized in their areas of ministry, the church will grow to be more and more the instrument for the Kingdom that the Lord is calling it to be.

Note that when I use the words he or men in this article, I am using those words in the broad sense of people/mankind. I fully believe it is scripturally supportable that both men and women are equally called to serve in all areas of ministry. But that is another topic.