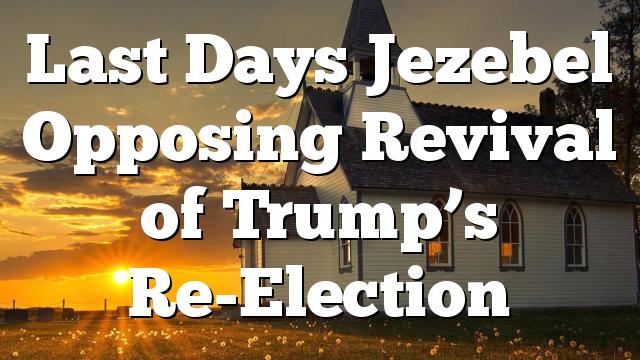 Rev. John Kilpatrick remembers the intense move of God that overtook his Brownsville Assembly of God church in Pensacola, Florida, in the 1990s. More than 4 million people encountered God at that revival. But Kilpatrick says that if we want to see revival turn this nation around, we need the Spirit to move in more than just the church. We need an outpouring of the Holy Spirit in our marketplace, our media and our politics. Yet the Jezebel spirit is doing all it can to stop that from happening.

If you’ve been reading my Strang Reports or my latest book, Trump Aftershock, you know that last year, Kilpatrick prophesied Jezebel was rising up to oppose President Donald Trump. He gave that prophetic word while preaching one Sunday at his current church, Church of His Presence, and a video of that sermon went viral. I recently interviewed Kilpatrick for my new “In Depth With Stephen Strang” podcast. You can listen to it here or at the end of this article.

During our interview, he shared what he sees God trying to do in our nation—and what the enemy is doing to try to stop it.

“The Spirit of God is going to begin to invade this nation,” he says. “And it’s time for we in the ministry to begin preaching the word ‘repentance.’ I have never seen people find it so hard to repent as they do today. And many in the ministry won’t even give altar calls anymore and allow the people to come forward and repent of their sins and lead them in the sinner’s prayer. It’s like Satan has done everything he possibly can to keep a born-again experience away from this generation. It’s going to take a moving of the Holy Spirit, and it’s going to take revival … and I believe we’re getting close to it.”

Although Kilpatrick says he’s not a “Trump man,” he prays for him regularly and believes a coming revival depends on him being re-elected.

With the left growing more liberal and sin becoming more rampant, Kilpatrick believes we’re in a prime time for a fresh outpouring.

“This is spiritual warfare for the soul of this nation,” he says. “When you go back and study revivals, national awakenings, [these are] the very same kind of conditions that were prevalent right before revivals or these national awakenings.”

And he would know. The famous Brownsville revival I mentioned earlier happened in Kilpatrick’s church. He still remembers the incredible way God stirred it up—and it all started with prayer.

“Prayer is what sparked it,” he says. “God never puts revival on sale. It’ll cost this generation, but it cost previous generations. … The Lord spoke to me, and He said, ‘If you’ll make this a house of prayer, I’ll pour out My Spirit here.'”

When Kilpatrick received that word, he began holding a prayer meeting every Sunday night. The Lord told him to set up 12 prayer banners that represented 12 categories to pray for. People would go from banner to banner, praying for each topic and getting so excited about prayer that meetings soon began lasting around two hours or longer.

Kilpatrick and his church prayed faithfully like this for 2 ½ years before revival broke out. For about the first year of that time, Kilpatrick would hear a voice accusing him each week, telling him to stop these prayer meetings, or he would lose his followers.

“As we were praying, I heard the Holy Spirit speak,” he tells me. “And He said, ‘You have held tight. Now I’m about to send forth My Spirit in this place in a mighty way.'”

As soon as Kilpatrick heard that prophetic word, the accusing voice went silent, and he never heard it again. Revival swept through that church a year and a half later in 1995.

In fact, the revival came when Kilpatrick wasn’t quite expecting it. He was still grieving the loss of his mother, who had passed away a week before Mother’s Day of that year.

A little over a month later, on Father’s Day, Steve Hill preached as a guest at Kilpatrick’s church. But something was different about Hill this time, Kilpatrick says. Hill had just returned from experiencing the outpouring of the Spirit at Holy Trinity Brompton in London, England.

“After not seeing him for quite some time, there was a difference on stage,” Kilpatrick recalls. “He looked different out of his eyes. He walked different. His voice sounded different. There was an authority on him, a mantle that had come onstage. And so when I saw him, I said to myself, Oh, wow, this is not the same Steve Hill I knew.”

Hill preached two things during that sermon: Jesus loves you, and He has a plan for your life. As simple as the message was, around 1,000 people ran forward for prayer when he was done preaching.

“The rest is history,” Kilpatrick says. “The power of God came down in such an awesome way that if I live to be 300 years old, I’ll never forget that day. It was an awesome downdraft of the power and the glory of God.”

That revival continued almost every night for about five years. People traveled from all over the U.S.—and even the world—to experience what the Spirit was doing in Pensacola. Could God bring another Brownsville revival to America? Of course. But Kilpatrick says we need a revival that goes beyond one city and sweeps the entire nation. To see that happen, though, God’s people must position themselves to receive it.