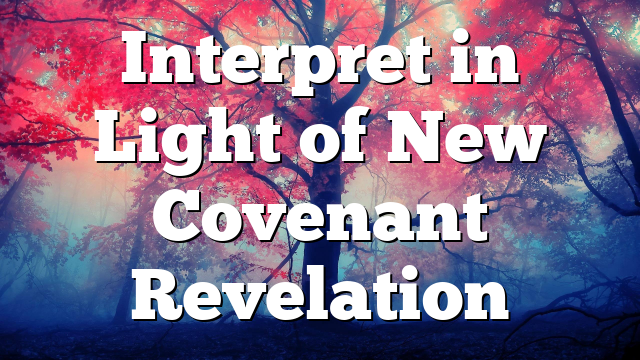 I believe we should always interpret the Bible in the light of the revelation of Jesus and the New Covenant. “We see through as glass darkly…” (1 Corinthians 13:12), with only partial but steadily increasing revelation. That was true of those God used to write the Bible as well. The revelation that God brought through them is the Word of God, but they didn’t have the full picture either. In Jesus, we see a fuller picture of who God is.

When I see things in the Old Testament, and even in the New Testament, that don’t seem to make sense or I don’t understand, I look first to understanding them in the light of the New Covenant and the character of God as revealed in Jesus.

Just one example that made me think about interpretation:

A sister asked, “Can someone tell me what are the ancient paths?” Something she read in the Bible. I prayed, Holy spirit give me wisdom and Your meaning here, and wrote:

“As I read your question, these thoughts came to me by the Holy spirit: There are two verses with this phrase. First: “Thus says the Lord, ‘Stand by the ways and see and ask for the ancient paths, where the good way is, and walk in it; And you will find rest for your souls. But they said, ‘We will not walk in it.’” (Jeremiah. 6:16).

What is the “ancient path”? It is “where the good way is.” What is the good way that we are to walk in? “There is therefore now no condemnation for those who are in Christ Jesus, who walk not according to the flesh, but according to the Spirit” (Romans 8:1). That is how we find rest for our weary souls that are usually so caught up in the busyness of life. As born-again believers, we are “in Christ Jesus,” and walk “according to the spirit.” How is that the “ancient path?” Well, wasn’t that God’s original intention?

“Because My people have forgotten Me, they have burned incense to vain gods and they have stumbled in their ways from the ancient paths, to walk in bypaths, not on a highway” (Jeremiah 18:15). Today is as it was then, with people forgetting the Lord and worshiping the false idols of modern society, rather than the “ancient paths” set out by the Lord. Jesus opened the gate to the “highway” to heaven by His grace, but people stumble in their own ways, or the “bypaths” of legalistic religion.