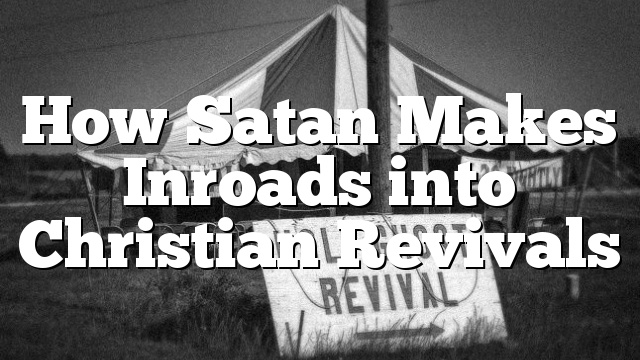 THE STRONGHOLD OF DECEPTION

It was during the praise and worship service just before I was to preach in a very lively “revival” church. It was a very festive atmosphere with people shouting, waving banners and running the aisles. As I quietly worshipped, I heard the Holy Spirit say, “The stronghold of deception is pride.”

I immediately knew that I was to address the fact, that during times of revival, pride often creeps in because of the power and blessing of God. Individuals and churches get an inflated sense of their own importance because of God’s blessing on their lives. This pride then becomes an opening and a stronghold for demonic deception.

By the time I finished my message that morning, a solemn quietness had settled over the congregation. After the benediction, everyone seemed almost afraid to talk and spoke quietly and in whispers as they departed. It was such a contrast to the earlier festive atmosphere that I was somewhat concerned.

After the service, I shared with the pastor that I hoped I had not squelched the enthusiasm of his congregation. He replied, “Oh no, you were right on target.” “In fact,” he said, “I may be accused of bringing you in as a hired gun today.”

He then shared how that the very thing I addressed that morning had been happening within his congregation. He told how individuals who had been saved less than a year in the revival had challenged his leadership. Because they were experiencing God’s presence and power, they had gotten an inflated sense of their own importance, not realizing that what they had experienced was out of God’s goodness and grace.

This statement was born out of his observation of the tragic collapse of the lives and ministries of several men who had been powerfully used of God in ministries of healing and deliverance. In each case, Satan’s door of entry into the person’s life seems to have been an inflated idea of his own importance.

Instead of humbling themselves before God, they became enamored with their own success. And instead of moving on to greater displays of God’s glory and power, they were brought down because of their pride and arrogance. 1 Peter 5:5 says that God resists the proud but gives grace to the humble.

For several years, beginning in 1947, Lindsay managed the ministry of William Branham, the most prominent healing evangelist of the 1940s-50s. Branham was launched into an amazing ministry of signs and wonders after an angel appeared to him during a time of prayer and instructed him to take a gift of healing to the people of the world.

Thousands attended his crusades because of the prominence of healings and miracles. These giant crusades were organized by Lindsay who also emceed the meetings and taught in the morning sessions.

When the time came for Branham to preach in the evening services, Lindsay would introduce him in a low-key manner while at the same time acknowledging that God was using him in a remarkable way.

How Branham Was Deceived

Once, when Lindsay was away, a “Brother Baxter” emceed the meetings and introduced Branham. His flowery introduction was filled with glowing accolades and he referred to Branham as a special “end-time prophet of God.” When Lindsay returned, Branham said, “Brother Lindsay, I think I would like for Brother Baxter to introduce me from now on.” (These facts were relayed to me by the late Freda Lindsay, wife of Gordon Lindsay, who was privy to all the details described)

Branham then began to surround himself with individuals who fed his ego with ideas about being a special end-time prophet of God. Lindsay sought to warn him, but his advice was not heeded. When he saw that Branham had embraced serious error, he withdrew from Branham’s ministry and developed the Voice of Healing, known today as Christ for the Nations.

Branham eventually began to believe that he was the fulfillment of God’s promise in Malachi 4:5 which says, I will send you Elijah the prophet before the coming of the great and dreadful day of the Lord. He also identified himself with the angel of the seventh church in Revelation 3:14.

Branham went on to embrace and teach other bizarre doctrines. His “serpent seed” doctrine said that Eve’s sin involved sexual relations with the serpent with people descended from this event and, therefore, destined for hell. Those who would receive his teachings were the seed of God and destined to become the bride of Christ.

In spite of his bizarre self-concept and erroneous teachings, miracles continued to occur in his meetings. God is merciful!

In 1963, Kenneth E. Hagin walked into Lindsay’s office and handed him a prophecy which he had written out. The prophecy stated that the leader of the deliverance revival had gotten off track and would shortly be removed from the scene.

Lindsay read the prophecy aloud in the presence of his wife, Freda, and then locked it in his desk. Freda asked, “Who is he talking about?” With great somberness he replied, “He is talking about Branham. He has gotten off track and thinks that he is Elijah.”

Two years later, Lindsay received a call from out-of-state asking him to come and pray for Branham who had been in a car accident and was in serious condition. Because of his previous experiences, Lindsay felt that he was to leave the situation completely in the hands of God and he did not go. A few days later he received word that Branham had died.

Though sad and tragic, Branham’s experience is not unique in the annals of Church history. Again and again, as God has visited His people in answer to their prayers, pride has crept in and the revival has been squelched, and it is still happening today.

Pride in the Pentecostal/Charismatic Camp

While ministering in a large urban area on the east coast, I picked up and scanned a tabloid that appeals primarily to Pentecostals and Charismatics. I was stunned by the arrogance and pride in the advertising that had been placed by churches and ministries.

There were not only charismatic prophets, apostles and bishops, there were also “covering apostles,” “presiding apostles,” “jurisdictional apostles,” “archbishops,” “prelates” (religious rulers) and even one individual who had designated herself as “her super eminence Apostle so and so.”

I thought, “Can these individuals be followers of the One who made Himself of no reputation and washed the feet of His own disciples, a task performed in that culture only by household servants and slaves?” Can they be followers of the One who, in Matt. 23:6-12, warned His disciples about adopting honorific titles that would set themselves apart from other believers.

No wonder the world does not see Jesus. They cannot see Jesus for us. No wonder we are not seeing a national spiritual awakening! The first condition for such an awakening, according to II Chronicles 7:14, is for the people of God to “humble themselves.”

God Is Calling Us to a Different Posture

Several years ago, I sat in a “Revival Now” conference and experienced an overwhelming urge to bow down before the Lord. I sat and contemplated what I should do for no one else was bowing down. In fact, people were going forward and standing as they waited to receive prayer for a fresh touch of the Holy Spirit.

However, as this urge to bow myself before the Lord continued, I finally turned and knelt at my seat. As soon as my knees touched the floor, I heard the Holy Spirit speaking in my heart in a clear and vivid manner. He said,

I am going to be doing some incredible things in the days ahead: And when you see My power and My glory, this is to always be your posture. You are to bow down and acknowledge that I Am the sovereign Lord of this universe.

Yes, pride is the stronghold of deception. That is why we must continually acknowledge that it is not about us, but about Him. And remember the exhortation of Peter in I Peter 5:5b-6 where he said,

And be clothed with humility, for God resists the proud but gives grace to humble. Therefore, humble your selves under the mighty hand of God that He may exalt you in due time.

This article is derived from Dr. Eddie Hyatt’s latest book entitled, Angels of Light, with the subtitle, False Prophets & Deceiving Spirits at Work Today in the Church & World. The book is available from Amazon, will soon be available from his website atwww.eddiehyatt.com.

Is ISIS driving people from 10/40 window into our back yard to evangelize them? Does the Lord of the Harvest does not seem to…