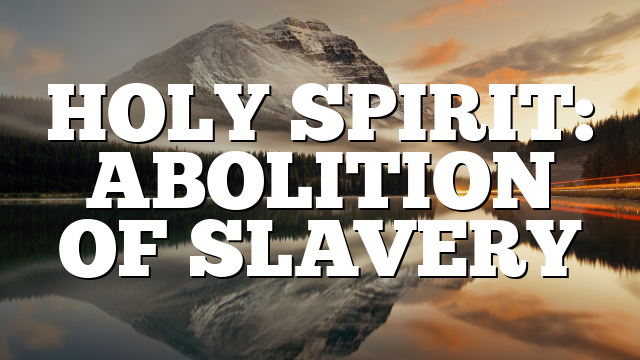 Slavery was the backbone of the ancient world’s economy—from India to Europe and the Americas to Africa, the entire world profited from slavery. Captured or subjugated peoples became slaves to their conquerors, and kingdoms and civilizations traded in “cargoes of…slaves and human lives” (Rev 18:13b). Slavery wasn’t just accepted throughout human history, it was institutionalized.

In this world, slaves and servants were not to be empathized with—on the contrary, they deserved their state and were treated like lesser humans. Slave owners were often tyrants, but some, like the Romans, even clothed themselves in titles like “benefactor” – as if slavery was for the welfare of the slave. That changed in the West after the fall of the Roman Empire as Christianity spread and the enslavement of fellow Christians was abolished, taking the first step towards abolition with the scriptural conviction to “love your neighbor as yourself” (Lk. 10:27).

Like the Jews, some people still struggled with the question, “Who is my neighbor?” (Lk. 10:29b) – did this only apply to Christians? Over time, they abolished slavery of nonbelievers, and then eventually slavery of foreigners—for Jesus had said clearly that even a Samaritan (a despised enemy, much less a slave) was a neighbor worthy of love (Lk. 10:30-37). It was the testimony of God’s Word by the Holy Spirit which convicted the world that slavery was evil and which ended institutionalized slavery in the West. We can be confident that the Holy Spirit does indeed “convict the world concerning sin and righteousness and judgment” (Jn. 16:8) through God’s Word. And it is in God’s Word that the greatest emancipation story of human history is told—How God freed the Israelite nation from slavery to Egypt. It is no coincidence that the story of Israel’s slavery and emancipation became a rallying cry of the West to end slavery.

But the Word’s testimony against slavery doesn’t end there. God revealed the ultimate emancipation in the Gospel through His Son, Jesus Christ, when He offered to redeem men from their slavery to their innate sin nature and the elemental spirits of the world, because “everyone who commits sin is the slave of sin’” (Jn. 8:34). By accepting Christ’s payment for our lives and entrusting ourselves to Him, we can come under His protection. And though worthy only to be His slaves, God has revealed His thoughts are higher than our thoughts by making us His own sons. For it is God’s eternal plan “that the creation itself also will be set free from its slavery to corruption into the freedom of the glory of the children of God” (Rom. 8:21), “so that we would no longer be slaves to sin” (Rom. 6:6).

This “mind of the Spirit” (Rom. 8:27) indwells the Believer and changes our behavior to be more like Christ—as Jesus reflected, “The kings of the Gentiles lord it over them; and those who have authority over them are called ‘Benefactors.’ But it is not this way with you, but the one who is the greatest among you must become like the youngest, and the leader like the servant. For who is greater, the one who reclines at the table or the one who serves? Is it not the one who reclines at the table? But I am among you as the one who serves” (Lk. 22:25-27) – the King of all Kings!

Man did not advance himself or progress to believe in abolition—God did, and it is the conviction of His Spirit through the Church that has led the world to know slavery is evil. Give Him the Glory! Amen.

For more Devotionals and Bible Studies in God’s Word, visit our Ministry webpage at www.bereanlamp.org

A Formula For Victory