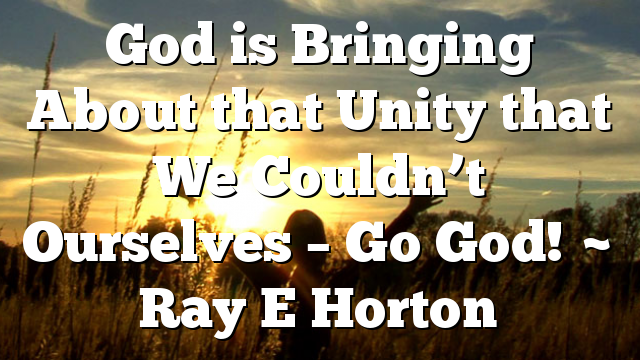 What a great cause for hope is the message below by Chris G Bennett, posted in the Prophetic Releasers Facebook group. This is exactly in line how I and many are praying. [Emphasis is mine in the quoted message below].
We have had powerful world-wide outpourings of the Holy Spirit before, most recently the Charismatic renewal, and they brought some change but couldn’t fully take hold because God’s people, the church, weren’t sufficiently ready.
This time around, multitudes of awakened believers have been fed up and earnestly praying, so that this new wave will achieve God’s desires as the Glorious Church arises in unity to push back the darkness, make disciples and bring in the harvest.

Everyone talks about unity in terms of denominations. It’s been tried and failed abysmally for years, although a remnant of the so-called Ecumenical Movement still lives on even today. The Lord just showed me a slightly different viewpoint on unity. Suppose, just suppose, there came a movement towards a greater unity of doctrinal beliefs – still retaining denominational fences – heaven forbid we should do all those power structures out of business!
Sounds crazy, a total contradiction of terms, doesn’t it? After all’s said and done, nearly ALL denominations were founded on doctrinal arguments. The fact is that, in the first century, the Church was one church, with all their issues. It was only when pride, spiritual pride, stepped in that one group stopped talking to another group and denominations were formed.

So what did I see, or hear, the Lord showing me?

The first thing I saw was Cessationism ceased as more and more people started praying in tongues! Then I saw Replacement Theology torn up as people saw God’s hand upon Israel. Next came the Prosperity Gospel, closely followed by one-fold ministry being replaced by five – again as more were baptized by Holy Spirit! As I saw these things, and more, I sat shaking my head, as much in disbelief as in wonderment. I heard the Lord say, “You can’t imagine it, even less see it happening, can you?” I replied, “No Lord, I can’t! I mean, this would take such a quantum leap as I could never really imagine it happening?”
“Watch!”, was all the Lord said. What happened next made me gasp in joy, wonder, excitement – you name it. Every emotion ran through me. I saw a wave of Holy Spirit flow over the entire earth. It re-ran, like a video clip on repeat. I saw a wave of Holy Spirit flow over the entire earth. this time I focused in a little bit, then closer, then closer again. I saw entire churches all over the globe being baptized by the Holy Spirit! “But Lord, they don’t believe in this!”, I yelled at one point! “They do now!”, answered the Lord, with a chuckle. Some, of course, still rejected it, fought against it, even ran those who received it off the premises. But many received their baptism with great joy – and much repentance.
Then I watched as newly baptized people came out of their denominational walls and joined together in unity of the Spirit. Old doctrinal differences swept away by the realization of the truth, Gods truth. There was a great joy among God’s people as they began to come together as one and in one accord. As it says in Acts 2:1 “When the Day of Pentecost had fully come, they were all with one accord in one place.”
“Can this really happen, Lord?”, I asked. He answered with a scripture, Mark 10:27 “But Jesus looked at them and said, ‘With men it is impossible, but not with God; for with God all things are possible.’”
I was amazed, then reminded of Habakkuk 1:5 “‘Look among the nations and watch— Be utterly astounded! For I will work a work in your days Which you would not believe, though it were told you.”