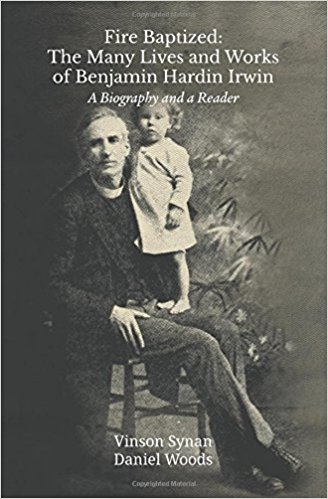 I’m starting to read the brand new book by Vinson Synan and Daniel Woods, “Fire Baptized: The Many Lives & Works of Benjamin Hardin Irwin.” I’m only about 40 pages into it, and am NOT disappointed. I would point out one statement I believe to be errant (and which is on-subject here.) They write: “The idea that the baptism in the Holy Ghost and fire is an experience separate from ad subsequent to to both regeneration and sanctification is the most important contribution of Irwin’s movement. This later became the basic foundation of the worldwide Pentecostal movement.” This statement is positively FALSE. While Pentecost was restored among those under the Wesleyan teaching, I would point out:

1) It was most clearly restored in Topeka on 1/1/01, upon the express declaration of the Initial Evidence doctrine (that so many despise today, even within Pentecost!)

2) While those in charge at Azusa made initial efforts to inculcate the Wesleyan “3rd Blessing” teaching into Pentecost, they were roundly rejected by 1911 under the preaching of William Durham, whose Chicago and LA works became (arguably) the most pivotal hub of spreading the Pentecostal baptism worldwide. While most of “Pentecostalism” rejected the “3rd Blessing” teaching of John Fletcher, there was ONE UNIFYING doctrine of Pentecost that was also original at its restoration in 1901, ie. Tongues as Initial Evidence. Somehow Mr. Synan and Mr. Woods missed this, and it is fairly glaring. That being said, I can’t wait to continue reading their fascinating book! I think, clearly, what it means to be a classical “Pentecostal” is to accept the restored teaching of Tongues as Initial Evidence.

“For over a century Benjamin Hardin Irwin has been a shadowy figure in the history of late nineteenth century Holiness movements and early twentieth century Pentecostal movements in the United States. From writers such as J.H. King, we knew that in 1900 Irwin ignominiously left the movement he birthed, the Fire-Baptized Holiness Church. But beyond that, very little was known of the life of this enigmatic man. However, after years of research bolstered by the accessibility of numerous sources otherwise unknown and inaccessible, noted Pentecostal scholars Dr. Vinson Synan and Dr. Dan Woods have provided a rich study of Irwin and his writings.”

A Brief History: The Fire–Baptized Holiness Church came into being as the result of the evangelistic ministry of Benjamin Hardin Irwin of Nebraska. … in large numbers of followers from the holiness movement, many of whom were also attracted to … Irwin was elected to serve as “general overseer” for life while “ruling elders” were appointed …

FacebookTwitterSubscribe
Subscribe to receive all news to your email or phone: [wysija_form id="1"]
baptizedbenjaminfirehardinirwinlivesworks

Yemen’s Attack on Saudi Arabia Fulfills Isaiah’s Gog and Magog Prophecy I will say to the North, “Give back!” And to the South, “Do…