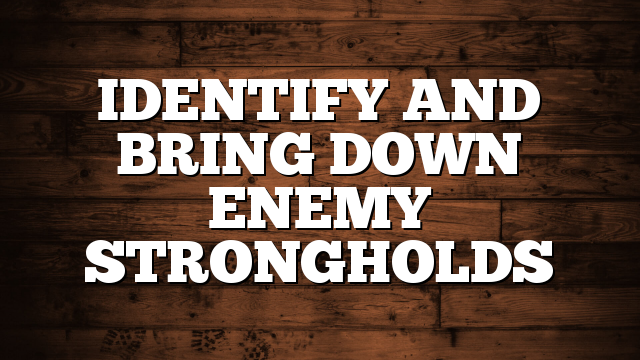 CAN CHRISTIANS IDENTIFY PARTS OF EARTH THAT ARE STRONGHOLDS OF ENEMY AND BRING THEM DOWN?

Are there certain parts of the country that are “darker” than others? Are there particular places in North America that seem laden with spirits? What locales are most “tinged” with evil?

We recall, years back, a Protestant movement to answer such questions. It was called the “spiritual mapping project,” and it certainly was a valiant goal.

Can we really evaluate entire cities and regions spiritually?

The short answer is “no.” Every area has its good and its bad. Admittedly, there are cities we’ve visited that had special and not always very pleasant feelings.

There is Savannah, Georgia: you can almost touch the (negative) spirit world here. There is Lily Dale in Upstate new York: a village of mediums. There is the “Tenderloin” part of San Francisco, where strange sexual practices have attracted a strange spiritual energy. There is the Chelsea part of Manhattan: even cabdrivers call it haunted (and some don’t like driving there).

The list is without end. Take New York: you could also list parts of the Lower East Side or Greenwich Village — or, well, any neighborhood.

But there are certain places with unusual “clouds,” and often it’s caused by what has been or is being done: strip joints, bars, pornography, drug use, tattoo parlors, astrology, spiritualism, New Age, pagan burial mounds, and wicca often do confer a burden of evil, as does intense materialism in the swankier parts of town. There are pockets of good even in the darkest places. It is an interesting rumination as many prepare for summer trips.

Since the Seventies, there have been ministries that have set out to study an area, “map” out its spiritual “strongholds,” then go about in prayer to bring them down. “Can the ‘spiritual DNA’ of a community be altered?” asked the Christian Science Monitor. “That’s the question posed in a Christian video called “Transformations. Kenyan pastor Thomas Muthee is convinced that it can be. In 1988, he and his wife, Margaret, were ‘called by God to Kiambu,’ a notorious, violence-ridden suburb of Nairobi and a ‘ministry graveyard’ for churches for years. They began six months of fervent prayer and research.

“Pondering the message of Ephesians 6:12 (‘For we wrestle not against flesh and blood, but against principalities, against powers, against the rulers of the darkness of this world…’), they prayed to identify the source of Kiambu’s spiritual oppression, Mr. Muthee says. Their answer: the spirit of witchcraft.

“Their research into the community revealed that a woman called ‘Mama Jane’ ran a ‘divination clinic’ frequented by the town’s most powerful people. After months of prayer, Muthee held a crusade that ‘brought about 200 people to Christ.’ Their church in the basement of a grocery store was dubbed, ‘The Prayer Cave,’ as members set up round-the-clock intercession. Mama Jane counterattacked, he says, but eventually “the demonic influence — the ‘principality’ over Kiambu — was broken,’ and she left town.

“The atmosphere changed dramatically: Bars closed, the crime rate dropped, people began to move to the area, and the economy took an upturn. The church now has 5,000 members, he says, and 400 members meet to pray daily at 6 a.m. From just such experiences, a global movement of evangelicals has developed over the past decade that seeks to free cities and neighborhoods from social scourges even as it ‘takes them for God.'”

In “tracking” spirits, evangelicals look at the ancient religious practices in the city; whether strange sects are located therein; if there has been war, brutality, or slavery; what kind of leaders were (and are) there; when the Gospel was first preached; and how many in a vicinity practice Christianity.

The intention is admirable. We’re all called to spiritual warfare — to a degree, at some level (and mainly personal). Paul in Ephesians tells us that our reality is not controlled by what is seen but rather by what is not.

Still, can we map such? Can we ever really grasp the entire spiritual landscape — or even the foundational one, when we realize that before settlers were Indians and before Indians were paleo-Indians and before paleo-Indians were cavemen? As one critic points out, Paul does not discuss the origin of demons, does not reconstruct their hierarchies, does not affirm territorial jurisdiction, does not name them, and does not list their function. We can not possibly see this realm with physical eyes.

That doesn’t mean we don’t battle them — nor does it refer to the “naming” of demons (by general characteristics) in deliverance. It means we can’t hope to have the whole picture.

But we should recognize what we can.

If you want to see the prevalence of one aspect of a stronghold, just look for the local “ghost tour.”

Around the world we think of entire countries that seem under the sway of the dragon (see: China). Note the strangeness too in countries like India. And in the Middle East.

But, again, how far to go with this? Is it relevant whether there is a Freemason hall (or sign at the entrance of a city, right there next to the Rotary Club)?

Perhaps. Even, probably. There is an aura when there is such a presence.

And it predominates, if it is not counterbalanced. Sacramentals can be potent. Most potent: praying — and pleading the Blood — as we drive around town.

“Western Christianity, to its detriment, has lost touch with this elementary understanding and has, for the most part, considered this earthly realm as the basis for all its decisions, whether those decisions were evangelically or socially motivated,” says one proponent of spiritual mapping. “The major hindrance to our past attempts to set the captives free was looking for a natural or physical explanation to spiritual matters. In essence, thinking the physical realm is the first layer of reality. Through the discipline of spiritual mapping, we learn to see things as they truly are and not simply as they appear to be. Spiritual mapping is likened to a doctor’s use of x-rays and MRI to diagnose what is being manifested on the outside of the patient. Like the doctor, the intercessors can then treat the cause of the problem and not just treat the symptom. It is remarkable that up until recently we as the Body of Christ have been ignorant of the invisible world. Oh, we have known about Heaven and hell and God and the devil, and many of us have been casting out demons. That, however, is not enough to wage an effective war. As George Otis [who coined the term ‘spiritual mapping’] says, ‘One would think the ways of the spiritual dimension would be as familiar to the average believer as the sea is to mariners.’ Such, however, is far from the case. Why? Otis goes on to say, ‘The problem seems to be that many believers — particularly in the Western hemisphere — have not taken the time to learn the language, principles and protocols of the spiritual dimension.’ “

Says another: “Strategic-level spiritual warfare deals with principalities and conditions that allow them to control nations. These are strongholds that hinder the work of the Church, and before the Kingdom of God can prosper, certain principles have to be applied and the principalities displaced. The land needs to be healed and God’s presence and favor restored, and only the Church can accomplish this. This is the mission of the Church. Strategic-level warfare prayer is seen in Daniel 10, where we see Daniel standing in the gap for his nation and praying for an understanding of God’s plan for his people. The time is during the Medo-Persian empire, and his prayers are hindered by a principality called the prince of the Persian kingdom (verse 13). This is not a person but a territorial spirit that is controlling and empowering the Persian kingdom. However, God displaces the spirit (verse 20) and another principality called the prince of Greece comes in its place. A change has occurred in the spiritual realm, and in the natural we see the Greek empire come into existence. So a change in the spiritual realm produces a change in the natural. Another good example is inEzekiel 28:1-19, where the focus is the nation of Tyre. There are two personalities, one is the natural ruler called the ruler of Tyre (verses 1-10), and the other is the principality who is called the king of Tyre (verses 11-19).  Also, Jerusalem is called the gate to the nations, indicating that through Jerusalem (or the Church) the blessings of God will flow to the nations (or people groups) of the world.”

Is it too heavy (convoluted)? Counters a critic, Kent Philpott: “I wish spiritual mapping would work. Here it is, Gospel preaching, praying for the lost, waging spiritual warfare and Christians uniting as well. But let us reason together. If this were indeed the biblical pattern for evangelism we might expect to see some expression of it in the New Testament. Yes, Paul does speak of principalities, powers, strongholds, but they are not put together as Otis and [others] have. If spiritual mapping was the means of salvation for the lost, we could expect a clear command, instruction or example of its use in Scripture. Instead, Jesus sent His disciples out to preach the gospel. Jesus did not give means other than preach, witness and disciple.

“Spiritual mapping strikes me as a magical, works centered ploy. Consider the program: the demonic powers over an area must be discerned by means of demographics, histories, etcetera, then prayer is used, by spiritual leaders united and in one accord in the target area to break the demonic stronghold. Whatever happened to the sovereign work of God? All that is needed apparently is knowledge, leaders in one accord and prayer. It is man centered, it is the work of man, and it is magical. Do we see this in any of the great awakenings, do we see this in the Book of Acts, did Jesus instruct His disciples along these lines, did Paul ever employ or encourage spiritual mapping or anything remotely like it? Certainly not!”

How fascinating it would be to see an actual “map.”

They have not really been able to come up with a comprehensive one.

We can’t do this, in  the physical.

But that doesn’t mean we shouldn’t pray strongholds down. Certainly, we all need to plead the Blood, call out praise (especially this), and use Blessed Salt in parts of where we live that seem (and feel) especially dark. This is a calling. It is important. We have had Blessed Salt spread over L.A., Boston, the coastlines of Florida, Beverly Hills, Hollywood, San Francisco, Washington, D.C. (including the Capitol), New Jersey, Toronto, Chicago, New Orleans, Dallas, San Antonio, Houston, Pittsburgh, St. Louis, Cincinnati, and other municipalities.

We just should be careful not to think we know more than we do, nor to become so engaged with such as to be obsessed with it.

Is the Angel of Israel Awakening?

Is the Angel of Israel Awakening? Simultaneously, the time had come for the Gentile church to awaken to her intercessory mission of compassion, to…