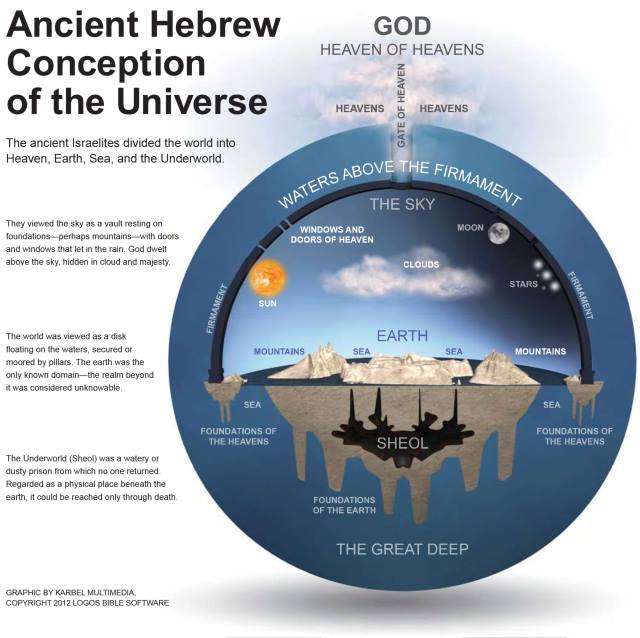 Ancient Hebrew concept of the Universe

Joshua 10:12 ► On the day the LORD gave the Amorites over to Israel, Joshua said to the LORD in the presence of Israel: “Sun, stand still over Gibeon, and you, moon, over the Valley of Aijalon.”

1 Samuel 2:8…the pillars of the earth are the Lord’s, and he hath set the world upon them.

2 Samuel 22:16: And the channels of the sea appeared, the foundations of the world were discovered, at the rebuking of the Lord, at the blast of the breath of his nostrils.

1 Chronicles 16:30: Fear before him, all the earth: the world also shall be stable, that it be not moved.

Psalm 18:15: Then the channels of waters were seen, and the foundations of the world were discovered at thy rebuke, O Lord, at the blast of the breath of thy nostrils.

Psalm 75:3: The earth and all the inhabitants thereof are dissolved: I bear up the pillars of it.

Psalm 93:1: The Lord reigneth, he is clothed with majesty; the Lord is clothed with strength, wherewith he hath girded himself: the world also is stablished, that it cannot be moved.

Proverbs 8:27 When he prepared the heavens, I was there: when he set a compass upon the face of the depth:

28 When he established the clouds above: when he strengthened the fountains of the deep:

29 When he gave to the sea his decree, that the waters should not pass his commandment: when he appointed the foundations of the earth

Can YOU explain When did Satan fall from the Heavens without GAP THEORY?